The BikePortland office was broken into this weekend and Jonathan and I have spent the morning figuring out what’s missing (and sighing a lot). The damage so far; our backup SLR camera, four Nikon lenses (ouch!), both of our digital audio recorders we use for events and interviews…

What did we get in exchange? A crowbar. Nice. We’re figuring out a plan of action and will keep you posted about a possible fundraiser.

In the meantime, the show goes on — here’s the news that caught my eye last week: 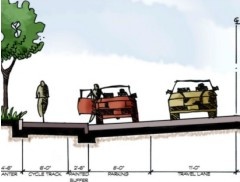 – In Portland, the Hillsdale neighborhood association has unanimously voted in support of installing a cycle track (physically separated bikeway) along Capitol Highway.

– The Columbia River Crossing debate is heating up. Dylan Rivera at the Oregonian lays out some of the dynamics — Randy Leonard is taking on bridge opponents, Metro is urging more aggressive focus on tolls to achieve desired traffic levels.

– The wages of $4 a gallon gas: Exxon Mobil has broken its own record for for yearly profit, despite falling gas prices in the last quarter.

– “Bikewashing” is the term we use here at BikePortland HQ for what Steve Jones rails against this week in the SF Bay Guardian — Mayor Gavin Newsom is touting the city’s first bikesharing program as a groundbreaking step towards sustainability, but it will only include fifty bikes for the entire city.

– The LA Bike Coalition (Los Angeles’ version of the BTA) has announced a new Car-Free Fridays campaign, urging members and Angelenos at large to leave their car at home one day a week. They city personal finance, health, environment, and the region’s economy as reasons to drive less.

– The New York Times reports on a new study that proposes turning 42nd Street in Manhattan into a carfree light rail corridor.

– Connecticut blog WalkBikeCT has a good editorial about how US bike advocates focus on building infrastructure — but our laws still don’t hold people accountable for hurting or killing others with their cars.

– A Dutch employer has found that employees who ride bikes save their employers a substantial amount of money every year — because they don’t get sick as often (via A View From the Cycle Path).

– A reader passed along this chart from the Economist showing car ownership rates around the world — the US isn’t where you might guess.

Oh, NO! That is terrible news. I’m sure you would let the faithful readers of this site know what would be helpful in the recovery (and I hope some sort of insurance would kick in to help with the costs of replacing such pricey equipment?)

Thanks Meghan. We had been talking about getting renter’s insurance, and now we definitely will. We’re definitely kicking ourselves for putting that off.

Wow, from the drawing it looks like you can get doored even on a cycletrack!

Oh no is right! Terrible. Your fellow bike loving blogosphere would love to help out in any way possible.

Oh man, I hope you can get that gear back or covered especially, that’s not cheap stuff…

I just threw down another $20 via your PayPal donate button.

Only if you’re riding in the painted “buffer” zone that appears to be placed between the curb and the cycle track.

sorry to hear about the break in. that’s probably the only disadvantage to having that ground floor office, no more key coded entrance, and direct access from the street.

I’m so sorry! Let us know when the fundraiser is and I’ll be there with an open wallet.

Sorry about the break in. Thieves suck. Lemme rattle my advocacy piggy bank and see what comes out. I wish you guys had some sort of subscription option. The Scotsman in me has a real tough time giving money away, but the tight little bastard in me has a much easier time buying something.

BTW the carfree lightrail 42nd street in NYC would be way cool.

You can borrow my D70 if you need to, with 18-70 zoom. But only if you promise to U-lock it up to an appropriate camera staple every night.

I just installed a security cam system at my place of income and it has been a real help, I would be more than happy to help shop and install a low-budg system if there is any interest.

Yeah Jonathan, time for another fundraiser!

Sorry to hear about the break-in, that’s terrible.

Nice to see people stepping up, though. Maybe a BikePortland bake sale is in order! I say that with full knowledge of your office’s proximity to delicious baked goods… In the meantime, I pitched in a small but long overdue donation via PayPal.

BTW, the description on your PayPal donation site is clipped off:

“Please support my work as an independent bike advocate and citizen journalist. Your donation helps me continue to make this si”

Those damn thieves even stole the rest of that sentence!

let me know if you want me to round up some bands for a fund raiser show. good luck!

I would bake some really good things for a bake sale. Cyclist get really hungry, right?

charity auction for the crowbar?

that was a joke.

what is the latest on Kristopher Miles condition?

Like everyone, I’m sorry to hear about the break-in!

About the car statistics: I have some doubts about this. My suspicion is that SUVs haven’t been included. I checked the data with the DOT’s Highway Statistics, and if you add the SUVs to the passenger cars you get a figure of approximately 557 cars per 1000 people. That would put the US on place 5 or 6, between Canada and Germany. And this is probably still a conservative estimate, as it doesn’t include light trucks used as passenger vehicles.

our thoughts are with you Jonathan and Elly. I wish you the best of luck and we definately want to help you.

Man, that sucks. Sorry to hear about that.

Definitely get some info up about the camera gear, though — there’s enough people reading here that you may get lucky. 🙂

“They city [sic] personal finance, health, environment, and the region’s economy as reasons to drive less.”

miguelaron/Jonathan: I’m (seriously) in need of a crowbar for a house project. I bid $40.

Maybe you should have a benefit event at the Crow Bar.

I think auctioning the crow bar is a great idea (seriously!).

Or maybe you could just place it in a lost and found, and see if anyone claims it.

Sorry to hear about the break-in, Jonathan and Elly. I don’t suppose the police fingerprinted the crowbar?

I think Matt is on to something there.