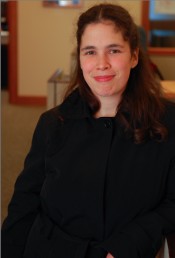 Last week during a meeting of the Bicycle Advisory Committee, there was one person around the table who I’d never seen before.

When she introduced herself as Amanda Mansfield from the staff of newly elected Commissioner Amanda Fritz, I was pleasantly surprised. After watching her listen attentively and fill several pages of notes (on what was a rather wonky meeting), I tracked her down to find out more.

It turns out that Ms. Mansfield was sent by order of Commissioner Fritz in order to learn more about bike issues. When I asked Mansfield why, she said, “to educate myself and Commissioner Fritz about what’s on the agenda for bikes. I plan to report back to her so we can keep abreast of the issues and help out whenever possible.”

In addition to being at monthly meetings, Mansfield told me she’s already met with the city’s bike coordinator Roger Geller (he’s preparing a “book” about bikes in Portland for her to study up on) and she has a meeting scheduled with advocate Michelle Poyourow from the Bicycle Transportation Alliance.

It’s also worth noting that Commissioner Fritz is not in charge of any bike or transportation-centric bureaus. It is a very positive sign to see her taking a proactive approach to learning about bike issues.

We all know bikes are a priority in the Mayor Adams’ office. Add to that Commissioner Leonard being a frequent bike commuter and Nick Fish’s awareness and support of two-wheeled travel and you’ve got a City Hall where bikes are far from a minority issue.

Now the question is, will Commissioners Saltzman, Fish, and Leonard follow Fritz’s lead?

It’s great to know we have support from many quarters in City Hall. Thank you Commissioner Fritz and welcome Amanda Mansfield.

You see- There are some good people out there. No controversies here

This is great to read.
Hopefully she will visit some people involved in the off-road cycling community as well. That’s where we really need some help.

okayyyy, here we go on the circle of life.

Some create an enclave of vibrant human energy.

It is so compelling, it attracts others.

Others become a faction…a political force…

We are corrupted (by the likes of
Amanda and Commish Fritz)

We start again…with another creative outlet, maybe in another city.

I only regret this cycle is endless.

A Buddist could really see alot in this.

Jim, the problem is that we all have things in our lives that would be controversial if made public. ALL of us. Every one of us would have our careers destroyed if the Boregonian or the Willamette Weak published our private sex lives.

**commented deleted because it was a baseless, judgmental insult*** (come on, Steve)

Ditto.. the best way to learn about bike issues to ride around the city..

I suppose it does not pay as well as taking pointless, endless notes all day. I am sure she writes fine reports though.

These ‘advocates’ and ‘aides’ all look a bit like leeches to me. I guess it beats having a real job though.

Commissioner Fritz is doing her job by making sure that she is knowledgeable about bike issues.

Her staff member, Amanda Mansfield, is doing her job in several ways — by listening, reaching out, meeting with other bike advocates, and also by biking around town as I’ve seen her do when I volunteered on Amanda Fritz’s campaign.

I think we can more effectively advance bike issues — like other important issues — when we commit ourselves to constructively engaging decision-makers, not wantonly insulting them or their staff.

“I suppose it does not pay as well as taking pointless, endless notes all day. I am sure she writes fine reports though.

These ‘advocates’ and ‘aides’ all look a bit like leeches to me. I guess it beats having a real job though.”

Are you serious? “Real job”? Ms. Mansfield seems like an intelligent, hard-working employee.. i’m not sure why you have a problem with that.

Do you have evidence or a reason for saying these things that’s based on anything but your personal opinion? just curious.

Amanda-
Don’t worry about some of the commentors- Some of them seem to live in their own world. Their comments don’t seserve a grain of salt. Keep up the good work

I gotta tell ya- as someone who knows Amanda as a long time friend, the cynicism and ridicule from some of the people on this site is mind blowing and unfounded.

How do you trust anyone?

This was a cause which she,(Amanda), felt deeply and personally connected. The fact is she championed this cause and led
Councilman Fritz’ office involvement.

Talk about looking a gift horse in the mouth….

This is very positive news that Amanda is interested in the bike issues. Of course, I have read that she is very wonky and gets very deep in understanding every bit of the city that she can!

Here’s to more bike facilities and education. Some people on this blog could even stand for a little bit of anger management.

All I did was suggest she try riding a bike.

Hey Steve – have you ever worked in politics or government before? Try working all the time for little money and impossible expectations with leeches like you attacking from the safety of the internet. If you haven’t done this work I suggest you stop the baseless criticism. Hiding behind the internet is lovely, perhaps we should applaud people for actually doing something.

Amanda Fritz – thanks for having your staff look into bike issues, having someone in office who seems to be intellectual is fantastic. There are lots of us in the bike community who welcome new allies with open arms and a spirit of cooperation.

you said more than that