Design drawing of Gibbs Street bike and pedestrian bridge, which has been fast-tracked by Mayor Adams to help Portland’s economy.

Yesterday, the City of Portland announced a $503 million economic stimulus plan. Within that plan, is $52 million in Bureau of Transportation projects — several of which include bike-related facilities.

Here is a brief summary of the four projects that will begin in the next 12 months (compared to beginning possibly up to three years from now on standard timelines). 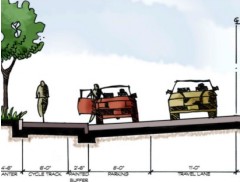 The Gibbs Street Pedestrian Bridge project includes the design and construction of a new bike and pedestrian only bridge at SW Gibbs St. (just south of the Ross Island Bridge) that will go over the I-5 freeway. The City says that project will cost $11 million and will create 157 jobs.

A project to replace the N. Vancouver Bridge over the Columbia Slough is estimated to cost $10 million and create 146 jobs.

The final project on the list is the Cully Boulevard Green Street Project. We’ve previously reported on this project because it includes Portland’s first-ever cycletrack. The new cycletrack will run from NE Prescott to NE Killingsworth. The City estimates the project will cost $6.4 million and create 90 jobs.

The cully improvements will be fantastic for those who bike in the area. Does anyone know if the actual design unlike the cross section that shows the cycle track will have sidewalks? Currently Cully does not have sidewalks so often you have to ride out into the street to go around pedestrians who use the narrow bike lane as a sidewalk.

The other great news is that this will solve the problem of not having a safe bike route to the hopefully soon to exist Colwood Golf Course Park!

Does anyone know what the current status of the Morrison Bridge bike/ped project is?

I have not read the entire document, but I am curious where the Waud Bluff Bridge over the Union Pacific Railroad tracks fits into this. This project has been lagging along for four years now since “funding” was secured. It is a huge connection for the North Portland Greenway and yet it still has not been built. I realize there were a lot of issues with costs coming in much higher than initial estimates, but why cannot this and other parts of the North Portland Greenway be part of the lists of “fast tracked” projects?

Great idea but…Prescott to K’worth is, what, half a mile? Blink and you’ll miss it. $6M? Seriously?

Or did I read that wrong?

I think the 6M is for a lot more than just the cycle track. There aren’t a lot of details in the document but I found this description:

90 jobs seems like it must be a pretty complete overhaul of that section. I notice a lot of people walk Cully there, probably to get from the new medium density residential that exists at Cully and Killingsworth up to bus lines off Prescott, along with the grocery store at Cully and Prescott.

That $6M figure likely includes the cost of rebuilding the entire street, not just the cycletrack.

Is there anything in the plan about replacing the Sellwood Bridge? Perhaps enough room to get bikes AND pedestrians across. I would be satisfied with a bridge that doesn’t seem destined to collapse at any moment!

“Does anyone know if the actual design unlike the cross section that shows the cycle track will have sidewalks?”

Yes. The Cully Project includes a complete rebuild of the entire streetscape including generously wide sidewalks

“Is there anything in the plan about replacing the Sellwood Bridge?

“Does anyone know what the current status of the Morrison Bridge bike/ped project is?”

We’re looking in it…. that project is so overdue that it’s a bit ridiculous.

Re: Morrison Bridge: back in 2005 when we “won” that project, I would never have believed we’d still be waiting on this. It’s so frustrating – the Hawthorne is desperately over capacity and the Morrison could serve some of those trips and relieve congestion.

I’m pretty sure the Sellwood Bridge doesn’t fall within the city’s purview, it’s a county issue. There’s also no way the city could break ground this year, they don’t even have a final design yet, and I think after they pick a design they’ve got to do an EIS. There’s a lot of work that has to be done there.

Seems to be a ‘trend’ here, Jessica. Between Waud Bluff, Morrison, Sellwood and who knows how many others that have not yet been mentioned. Appears as if bike/ped transportation projects have not been as much of a priority as they should have been in recent years.

Right: the Sellwood Bridge is owned by Multnomah County, so it is a county project, not a City project. I believe most (if not all) the bridges over the Willamette are County owned, and therefore outside of the City’s project list.

Here’s a couple of links regarding the Morrison Bridge Project.

The Sellwood Br. is a Multnomah Co bridge, but the draft EIS has been done, the locally preferred alternative is being developed, and the Final EIS will be out this spring/summer. I think Jonathan mentioned (in the BTA article where Richard Marantz’s dedication to the Sellwood project is cited) he’s doing something on Sellwood.

But yes…we need to hammer on our electeds at the County, City and most of all Metro, that the Sellwood Bridge needs to be replaced now.

A little confused on all the money getting dumped into the E. Burnside/Couch project.

One of portland’s best streets for cycling is Ankeny, and judging from all the cycle traffic I see on it every day many agree with me. Why put so much money into making burnside and couch more bike accessible? Theres lots of other places in this town that need more bike accessibility, and I’d put the east burnside area pretty much at the bottom of the list.

“A little confused on all the money getting dumped into the E. Burnside/Couch project.”

The way this project funding thing works is that projects come up and get funded… then the City works to try and make the best bike facilities possible within the project. They can’t just choose which streets to make bike friendly… they have to try and make something out of the hand they’re dealt to a certain extent.

editrixpdx,
The cycle track is probably the cheapest part of the Cully project, from what I understand they actually cost less to build then road, as the underlying support is not needed for cycle track that is necessary for auto lanes. The problem is that they have to be installed when new roads are laid, so they can really only be tied into larger projects.

Cycletracks in Portland would be divisive and destructive. What we need is stricter enforcement towards driver’s behavior and speed limits that reflect a sane city that accepts alternate modes of transportation on the road. What happens if I don’t use the cycletrack? What if I don’t want to be bottlenecked by slower commuter traffic (yes, i’m a punk kid that feels the need to ride fast ALL THE TIME)? I have to hop off the thing to get around people? Is it safe to bunny hop back on to it (I’m not even sure I can bunny hop on a fixed gear)? If I just flat out refuse to ride on that thing how many drivers are gonna honk and yell at me because they feel I’ve been given enough of the road and now I’m taking THEIR space? I’m not trying to be contrary, I just refuse to settle for anything less than the best. America settled for bike lanes however many years ago, invested city and state funding in those and look how far they got us! Cyclists dead in their own part of the road, people still getting right hooked on a daily basis and BIKE LANE SALMON!!!!!!

Punk kids who want to ride fast all the time should know how to bunny hop, on anything with wheels.

I think these jobs should go to local people only. No contracts to out of state co’s. legal, local id required, that way the money is going to stay here and not go out of state or country. I realize that some countries are poor and need money sent to them, which is a good and decent thing to do, however part of the intent of the stimulas is to get money flowing in our own local economy. That is why they are printing up more money ( which incedently makes our money worth less)

jonathan, i think all the projects on this list were already funded..? If that’s the case, then this just moves the construction schedule forward to get the work going, and the $$$ that were already allocated go… where?

Bike&/pedestrian bridges are a great idea. City of Minneapolis has build several of them in the last few years. They are not only pretty but also very functional and they do greatly help the bike&/pedestrian traffic flow away from the highways and major roads.

Does anyone know when the Sellwood Bridge will be replaced? It should be a priority over any other bridge.