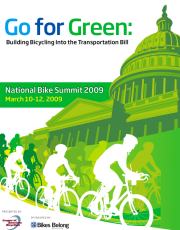 The League of American Bicyclists has announced details of the workshops that will be presented at their annual National Bike Summit that will take place in Washington D.C. on March 10 – 13th.

The event is both an educational and networking opportunity for bike advocates across the country as well as a chance to lobby lawmakers on Capitol Hill.

Here are some workshops that caught my eye (followed by my thoughts):

Bicycle advocates and industry leaders united for change.
The bicycle industry is more involved than ever in advocacy. Learn how we can more effectively work together in the corridors of power.

Bringing the economic argument together will be key to making the case for bikes from both the transportation and recreation perspective.

Making local transportation choice a major national priority.
Short, local, non-commute trips dominate travel throughout the United States but are overlooked in transportation models and priorities. Learn how and why we must turn this dynamic around in the next transportation bill.

I am glad to see this because too often public conversations about biking (in the media especially) revolve solely around commuting to work, when the majority of bike trips in this country are non-commute trips.

Getting a Fair Share for Safety.
Bicyclists and pedestrians account for 13% of traffic fatalities and get less than 1% of federal safety funds. Strategize on ways the next transportation bill can redress this balance.

I don’t like lumping bikes and peds into the same pot, but this is a very important point to make.

Urban Trails and Jump Parks.
The next frontiers are your neighborhood and city parks. Providing great riding close to home is the perfect way to attract youth to mountain biking. Learn how trails in urban areas have transformed the riding scene.

This topic has huge relevance to the Portland region. We have an intense demand for more urban, off-road riding opportunities and several projects in the works.

I plan on attending the National Bike Summit again this year; which will be my fourth consecutive year. With a new administration and a re-authorization of the transportation bill looming, there’s a renewed sense of urgency that should make this one of the best ever.

It would be great to continue the tradition of having a huge delegation from Oregon. If you think bicycles should play a more prominent role in our nation’s transportation mix, I would strongly recommend making the trip. If you’d like to join us, find out more information about the Summit here.

Love the venue.. This year’s Summit will be held at the Ronald Reagan Building and International Trade Center. Talk about the belly of the beast!

it is a nice venue.. it’s been there the last two years if I remember correctly.