[This story was written by BikePortland.org Managing Editor Elly Blue. She’s on an East Coast Tour. Follow her adventures here.] 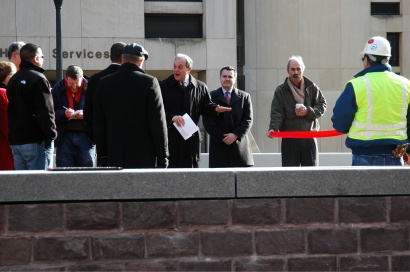 New Haven Mayor John DeStefano (in center) about to cut the ribbon on a new bridge over a newly paved section of the Farmington Canal Trail.
(Photos by Elly Blue)

As I was biking into downtown New Haven this morning (it’s about a 4 mile ride from my parents’ house in Hamden just to the north) I happened across a small crowd of people standing on what had just yesterday been an impassable construction zone on Hillhouse Avenue. Two men were holding a shining red ribbon across the roadway, a couple of reporters scribbled notes and took photos, and a local news station was there. Then I recognized New Haven Mayor John DeStefano, reading from a piece of paper.

“As a kid, this trail was a big part of my outdoor life… It was useful for getting to the library, or the nearby college where my mom worked, or to go rollerblading.”

It was the ribbon cutting ceremony for a rebuilt bridge over the old Farmington canal. As I rode up, I could hear DeStefano speaking. First there had been a river, he said, then a canal, then the railroad, and now the Farmington Canal Heritage Trail.

He cut the ribbon to polite applause, and I rode on.

The Farmington Canal Trail stretches 84 miles, from New Haven to Northampton, Massachusetts. It’s a neat trail, with a lot of connections to interesting historical destinations, including a number of old canal locks that have been preserved. Unfortunately, it isn’t all paved. 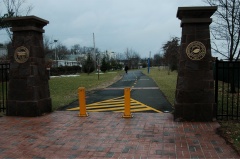 A recently paved section
of the trail in downtown New Haven.

As a kid, this trail was a big part of my outdoor life. Its first paved section was for the ten miles directly to the north of my house. It was useful for getting to the library, or the nearby college where my mom worked, or to go rollerblading. When I was on the cross country team in high school, we would go running on overgrown, unpaved sections.

But the part of the trail that figured most in my life was the section to the south, which could have taken me all the way to New Haven, but was never paved and never even usable as a hiking path. This was a constant source of longing and frustration, especially when I was living in New Haven and biking north on non-bikeable streets to have dinner with my parents every week.

In recent years, though, there has been some progress. Significant parts of the trail in New Haven are now paved, creating a bicycle highway from the edge of Hamden right into downtown. Using this section of the trail instead navigating a maze of one-way city streets takes at least ten minutes off of my travel time from my parents’ house to the Publick Cup, the coffeeshop where I’ve been working.

The Farmington Canal trail is clearly part of the growing popularity of rail trails since Rails to Trails helped gain federal funding for the paved paths the 1990s. It looks like this thing has momentum. I’m looking forward to the day when I can come back here and take a ride on a nice summer day all the way from New Haven to Northampton. For now, it’s really good to see better bike infrastructure coming to my old home town.

Update: After posting this story I got an email from Norm Thetford of the Farmington Canal Rail to Trail Association. He wrote that the gaps in the trail between New Haven and Hamden are scheduled to be completely paved by summer of 2009. At that point the trail will be complete from Hillhouse Avenue in downtown New Haven all the way north to Cheshire.

The next step in the works, Thetford wrote, is to continue paving the trail south from Hillhouse Ave all the way south to Long Wharf (where there is a theater, a hot dog factory, and an Ikea, among other destinations). This section is fully funded, and is currently in the design phase.

A note on funding: Thetford said that the new and near-future sections of the trail have come from a combination of specially appropriated federal monies and the federal Transportation Enhancement portion of the Federal Highway Association budget. Yale has been providing the required local matching funds through investments in bridges over the trail such as the one pictured above.

I’ll have more reports coming up in the next few days from my stay in New Haven. You can follow my travels from my East Coast Tour page, and on Twitter.

Elly-
How much of the trail have they constructed in that area? Is Hamden & New Haven connected?
Before the R2T movement, I used to ride/walk it on my BMX bike from near Quinnipiac towards town.

I just got an email from a local trail advocate with more details and will update the story.

Basically, the trail is expected to be completely paved from Hillhouse Ave in New Haven all the way up to Cheshire by summer 2009.

The next step is to complete the section from Hillhouse Ave south to Long Wharf, apparently this section has full funding and is about to enter the design phase.

Thanks for the update on trails from other parts of the country, Elly. It is always exciting to get a first hand perspective on how other communities are advancing on this front!

Thanks for the update, Elly. I spent a lot of time on Simbsury-Avon area portions of the trail when I lived in West Hartford and still enjoy using it when we go back home to see family in the F. Valley.

Elly: Have you seen: http://bikenewhaven.wordpress.com/ Seems like you might have a good opportunity for some cross blog action while you’re there.

I’m confused by (1) your quoting the mayor about the trail being “…a big part of my outdoor life…”, and then (2) repeating the same lines as your own narrative. Would you please clarify?

Hi Craig,
Thanks for writing — I think this apparent double attribution may be a site compatibility problem with your web browser — it ought to look like a callout quote in the instance where you read it as being attributed to the mayor. I’ve emailed you to ask about your browser!

If any of you good readers ever have trouble reading parts of our site on your web browser, please get in touch to let us know — it helps a lot!

Aha. It’s an unfortunate case of formatting in the email that went out earlier today (attached). It looks good on the website, a callout as you described.
Elly

It’s coincidental that the formatting error results in a very smooth, if errant, presentation–I picture the mayor reading your words aloud from the paper he holds:

Then I recognized New Haven Mayor John DiStefano, reading from a piece of paper.
“As a kid, this trail was a big part of my outdoor life…”

Elly, they can’t take that Yankee ingenuity out of you, despite all those years in the hippie Northwest! Back home for the holidays and already working!

Hey, is the Publick Cup in the spot where Willoughbys/Coffee? was? Or somewhere else? (And can you bring back the Daily Cafe while you’re out there as well?)