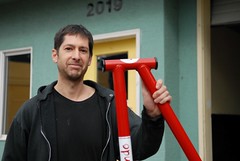 Joe Doebele’s new retail shop (not the building
in this photo) is now open
for business on SE Hawthorne.
(Photo © J. Maus)

Joe Bike, a new retail shop that sells imported (and then modified) utility and cargo bikes, is open for business on Hawthorne Blvd.

We reported on owner Joe Doebele’s business back in October when he announced he’d import the legendary Flying Pigeon brand bikes from China.

Since then, Doebele has been busy adding to his offerings (see below) and he opened his doors at 3953 SE Hawthorne Blvd. the day after Thanksgiving. Doebele says so far business is great and he’s recently hired a store manager and several mechanics to keep up with interest. 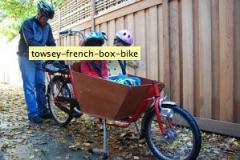 Among the bikes he’s offering are a Chinese-made “box” bike (similar in look to the Dutch bakfiets) that he has modified from stock with a Sturmey-Archer drivetrain, locally made walnut wood fenders, Schwalbe tires, moustache bars, and a leather saddle. Joe says, “It’s more fun and much easier to ride than a “Bakfiets” bakfiets, at way less than half the price.”

Doebele also has the original, Mao-era Flying Pigeon city bikes in stock. He tells us that they’re the first ones available in the U.S. to be sold without the stock rod brake system. Doebele has replaced the stock brakes with a front caliper and a rear coaster. He’s also replaced the cranksets and bottom bracket, installed a smaller chainring, upgraded the crankarms, and more. 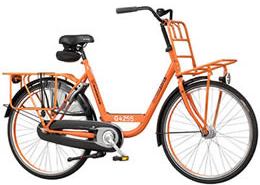 Joe Bike is also a dealer of the Mundo cargo bike (I tested it back in June). Doebele’s big change to that bike is an 18-speed model that he says is, “so downgeared you’ll be tempted to pedal your whole family up the back side of Mt. Tabor…and you probably could.”

Other interesting and hard-to-find utility bikes you’ll see at Joe Bike include the Dutch Batavus Personal Delivery Bike (it’s been discontinued in the U.S. and Joe has some of the last ones for sale) and the Strida folding bike from Germany, which Joe says is “as much fun as you can possibly have on your way to the bus stop.”

— Check out Joe-Bike.com for more info.

I hope some of those modifications are optional as someone who has been vegetarian since 6th grade, and 98% vegan for the last 6 months I would never even consider a bike with a leather saddle.

Woohoo Joe! Like I’ve told you before, you’re really at the forefront of the utility revolution. I know you’re going to do well up there on Belmont!

“…the Strida folding bike from Germany…”

Strida was created in England by Mark Sanders. Current version is built by Ming Cycles in Taiwan. US importer is Areaware in New York.

thanks for catching that. for some reason my brain told me it was from Germany. my mistake. i’ve fixed the story.

I love my Mundo by the way. It is so stable and solid feeling it’s almost as if I wish a log would fall in front of me so I could just fly right over it. Well *almost*, but I think I’ve made my point. Did I mention it is really stable? 😉

more and more people in PDX are starting to come to terms with bikes as a viable transportation alternative to the car. Joe has assembled a lineup of bikes that help people meet that need and I wish him the best…lets get more people out on bikes! Woo hoo!

I want the leather saddle on the modified cargo bike, that way my but will be comfy while I haul my freshly slaughtered elk back from the wilderness. Also, I hope it has a hefty kickstand so I can sit it up as I stop to drink milk from the cows I see along the way.

Good luck Joe. Looked in the window when it was closed the other day. Very fresh!

Joe, or Jonathan, what makes the Chinese box bike “. . . easier to ride than a “Bakfiets” bakfiets”? I understand the price difference, but why the easier ride?

Keep the cool bikes coming into Portland. A cycle of change is on the front.

Daniel- You wear leather shoes? how about a leather belt?

hey travis. i’m guessing that the comment about the box bike being ‘easier to ride’ is in reference to the difference between the extended-length, dutch-built bakfiets and the short-box chinese box bike. perhaps there is simply a mis-communication here as it relates to the comparison.

i can’t comment on whether the chinese box bike is any easier to ride than a short-box dutch bakfiets, but the shorter box definitely makes the bike quite agile compared to the long-box bakfiets.

the chinese box bike features geometry that is a virtual facsimile of the dutch original, so i imagine that if you compared a short-box dutch bakfiets with a short-box chinese box bike, the experience would be quite similar. but this is purely conjecture.

i have ridden the extended-length bakfiets that clever sells (extremely nice bike, btw) and when compared to the shorter wheelbase box bike, the latter is more agile, but that’s to be expected.

whatever the case, i find the chinese box bike to be extremely predictable and a pleasure to ride. check out my blog for the ins-and-outs of my experience using this bike on a near-daily basis.

I wonder if I could tie the ocean to your knees...

U can replace the saddle yourself in about 5 minutes…..

These bikes are the spitting image of the “New Viper” bikes that were discussed in the forums (here – http://bikeportland.org/forum/showthread.php?t=2127).

FWIW, in the UK there is a relatively small difference in price between the Gazelle Cabby and the Chinese knock off. I guess that wouldn’t be the case in the US even if Gazelle got their act together.

I don’t think our boxbike qualifies as a “Chinese knock off”. Right out of the carton, certainly. For various reasons we do not, and will not, sell it out of the carton (though we did make an early exception to someone who really wanted to put the stock bike to the test). After we get done with it, it’s pretty much built in Portland using the Chinese frame but also parts made in China, Taiwan, the UK, Germany, Portland, and Lake Oswego (Kool Stop’s R&D and manufacturing are there), plus a LOT of Portland labor. Upcoming modifications include a box-less, platform version requiring frame changes and a new box with a lockable lid. So ultimately the bike will be more Portland than Tianjin.

The shorter bike is significantly lighter and more nimble than the longer version. The Schwalbes and radically altered gearing help too, and we offer a few different handlebar options that open up the riding position for more power.

As for the leather saddle, it is indeed optional. It constitutes less than 2% of the volume of the bike, so the bike is actually more vegan than our 98% vegan reader, and I feel good about that.