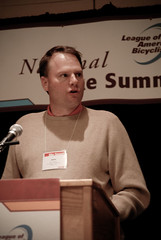 The mountain of bad economic news in this country seems to get steeper with each passing day. But amid the slowdown, there are some signs that bike-related industries are still rolling along with ease, at least for now.

Signs from the local, national and global bike industry indicators are mixed. In this story, we take a look at some of those signs and ask several industry players how things are going.

Bike Europe, a trade magazine that covers the bike business on the other side of the pond, reported last week on Taiwan’s export numbers. Overall, their exports are down 5.5 percent over last year, but bicycles are one of only two “industry sectors” that are up (the other is pharmaceuticals).

Bike Europe has also recently reported that Trek Bicycles CEO John Burke told a crowd at a Taiwanese supplier’s summit that Trek’s business is up over 7 percent and his outlook for the future is rosy. Trek recently got a lot of publicity for their belt-driving “District” urban bikes and they’re well-positioned to capitalize on the growing commuter/urban/utility market.

I asked Mr. Burke if the bike business can weather the economic storm and what his thoughts are on the symbolism of the failing U.S. auto industry. “In these difficult and historic economic times there are winners and losers,” he wrote via email, “there are more losers than winners, but….there are winners.”

“Cities that have been proactive in their bike policies will see the biggest gains.”
— BikeBiz editor Carlton Reid

Burke added that “SUV’s are losers, small cars are winners,” and he repeated his stump speech for bikes; that they’re a “a simple solution to very complicated problems,” like our health issues, the environment, congestion, and so on.

UK-based editor of Bike Biz, and an author of the forthcoming Bike to Work Book, Carlton Reid adds a cautionary note to the good news.

He says that sales were stellar in August, September and October, but then they “fell off a cliff in November” in both the US and the UK. He said he’s also seen an “alarming drop in bike imports” into the UK from key supplier countries.

Reid says many of the industries major players have reported big gains in the first three quarters of 2008, but that he expects softer fourth quarter sales.

As for Spring, Reid foresees a big bounce coming from March onwards. He adds that because of the growth in the commuting/urban bike market, “Cities that have been proactive in their bike policies will see the biggest gains.”

Like many in the industry, Reid thinks cargo and commuting bikes are set to “really expand in 2009”.

On a more local level, there seems to be a feeling that Portland is well-positioned to capitalize on the market for bikes if/when the economy gets worse.

Martina Fahrner is a co-owner of Clever Cycles. She says “everything is good” and that they’re still making rent and payroll. The shop did see a slowdown in foot traffic when Wall Street first started tanking back in October, but Fahrner says so far in the holiday shopping season, “it doesn’t seem like it’s much quieter than last year around this time.”

Fahrner thinks if people begin to cut back more, many of them will buy bikes. She wants to turn a worsening economy into a positive thing for local shops. “Just getting rid of one car can help you save money,” she said, “I think that we will start to see more bike sales.”

Fahrner has put on a workshop on how to finance health insurance by cutting back on cars, and is thinking of doing more community outreach to educate Portlanders about how to save money by cutting car use. 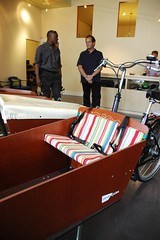 Bikes are cheaper than cars, a
fact that Clever Cycles is
banking on.

The owner of Portland-area online retailer TeamEstrogen.com says she’s noticed an “obvious change in buying habits” of late. Susan Otcenas — who’s also a BTA board member — told us her year-to-date sales are flat and that her sales were down in October (sales “fell of a cliff” is how she put it) and November.

Otcenas says December sales are looking much better than the last two months and added that, “Consumers are very price conscious right now.” TeamEstrogen.com is running more sales and promotions to counter that trend, which is something Otcenas says she “would rather not have to do” but is stuck because her inventory was ordered back in Spring when the economy was “totally different.”

Jay Graves is the owner of Bike Gallery, which has six locations throughout the Portland region. He is also a former president of the National Bicycle Dealers Association and travels often to other parts of the country to speak and hear from retailers.

Graves echoes comments made by Carlton Reid that the health of the bike business might be tied to areas that have a developed bike infrastructure. “Some retailers in the US are very challenged right now,” he wrote via email. “Our market (in Portland) might be doing well but there are many bike retailers around the country that don’t share our optimism.”

Last April, local bike shops were reveling as gas approached $4 a gallon. Now, prices have dipped below $2 and, while most people realize they will shoot back up again, the impact on bike ridership is real.

Susan Otcenas of TeamEstrogen.com says she wants to believe things will improve in the upcoming season, but that “If gas prices stay this low then I can’t be too optimistic for bike business booming.”

Stay tuned for more coverage of how the recession might impact Portland’s bike economy. Next up we’ll check in with some of Portland’s local framebuilders.

Sales would be way down in November, even if the economy was doing so much better that it was currently… only flat.

Most potential new commuters have been wrung out of the towel. If they did not start when gas prices were high and the weather was better, most likely they will not start now.

But as individuals have more economic instability, that may push some to cycling, similarly to how high gas prices once did.

“…bicycles are one of only two “industry sectors” that are up (the other is pharmaceuticals).”

Some people take drugs. The rest of us will ride.

Remember that, even with a flat economy, the bicycle industry is seasonal in nature. Sales ALWAYS fall off when the weather turns cold and wet, and in Portland that’s usually around November or so.

I remain cuatiously optimistic that the bike industry is positioned well enough to weather the worst of the recession, particularly those shops which (like ours) focus on bikes as sustainable and affordable transportation.

A personal anecdote: when I began commuting by bicycle daily in 1974 (yes, yes, I know, I’m dating myself here), I was often the ONLY person on the road, especially once the weather turned cold. Today I am NEVER alone on the road, even on the coldest days. I always pass or am passed by half a dozen other bike ridesr, and I take that as a good sign of real change.

I am finding it very easy to keep my wallet in my pants lately. I’ll buy a new chain in the spring and maybe a set of tires and tubes too. Other than that I am not likely to visit a bike shop until then. So if I am any kind of indicator, it will be a lean year for bike shops too.

The worst part about the upcoming dip in the economy is not the damage to big corporations, it is going to be damage to small businesses. Bikes are especially tough because it is easy to get around on a bike in a third world cheap sorta way. When you start asking yourself “what do I need to buy” instead of “what do I want to buy”, your choices are very different.

So for bike manufacturers the sales season is ramping up in Nov/Dec with orders being placed for product to be delivered in Feb/Mar for the start of the retail season.

I thought it had been reported a few weeks back that bike ridership had not been down despite lower gas prices. Has it fallen from previous winter averages?

Either way, it’s great to know that the industry is doing all right.

I think the market for value and commuter bikes will hold up ok, as will service as people try to keep bikes they already own in good working order. I do, however, wonder about the higher end shops like the recently opened Custom Bicycles of Portland. How many people are going to be buying $4,000 – $5,000 and up bikes right now?

I am a buyer for a bike shop down in SF and business is way off of where it was a year ago.

When people are talking about business being great until the bottom dropped out of sales in November you have to realize they are accounting for seasonal changes when they say that. There is no doubt that when they say that November sales are way down they are comparing it to last years’s trends. So, it is very meaningful.

“Most potential new commuters have been wrung out of the towel. If they did not start when gas prices were high and the weather was better, most likely they will not start now.”

Are you kidding?!? 1.8 million Americans just lost their jobs LAST MONTH ALONE. That is potentially millions fewer vehicles on the roads, since noone can afford a car.

“Some people take drugs. The rest of us will ride.”

… and some do both, then deny it when caught.

“Are you kidding?!? 1.8 million Americans just lost their jobs LAST MONTH ALONE. That is potentially millions fewer vehicles on the roads, since noone can afford a car.”

That doesn’t make them bike commuters, it makes them car commuters with no place to go.

As the economy goes into a depression and more people lose their jobs, they will park their cars and ride bikes. For a while they may ride their 1988 model that is in the garage so keep lots of axles, ball bearings, 27 inch tires, etc in your bike repair shops.

Eventually they will need to buy new. When they do they will go to the bike shop to buy a bike. They do not want to see fixed gear bikes, or artsy/craftsy bikes, or bikes with tires sized for a monster truck, etc. They want to see practical bikes with LOTS of gears so their flabby muscles will be able to keep them going. I am really disappointed when I go bike shopping now-days. I want a traditional bike with straight round frame tubes so I can attach pumps, bottle holders, lights, etc. There needs to be enough space between the fork/frame and the tires for fenders, etc. AND I expect several sizes of each model to be readily available for a test drive.

I suspect bikes will do OK during the depression. I’m wondering if the demand will be so high that they will become scarce or if things are really bad there might not be much demand – people might just rely on walking. Not sure what it will look like.

A book describing why we will go into a depression is “Crash Proof” by Peter Schiff. Another book I want to read but haven’t yet is “Financial Armageddon” by Michael Panzner. Cheek ’em out.