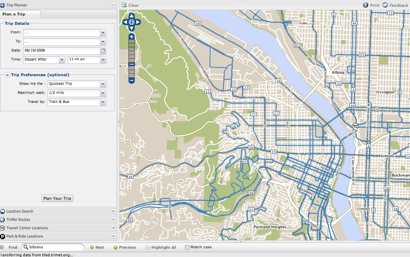 Screenshot from TriMet’s new trip-planning map unveiled at the Carfree Conference yesterday. Check it out here.

During a presentation at the Towards Carfree Cities conference, TriMet unveiled a new, interactive trip-planning map.

A demonstration of the new map — available at maps.trimet.org — was given by Bibiana McHugh, TriMet’s IT Manager for GIS and Location Based Services, at a presentation titled, How Online Information Can Encourage and Improve Carfree Mobility. The session was moderated by Joe Hughes, a software engineer from Google (he announced that Google Transit has gone mobile).

“We have a unique opportunity to change people’s routines, and we hope this tool can help with that.”
–Bibiana McHugh, TriMet

McHugh says TriMet’s map is a new user interface built on top of their existing trip planner and it’s integrated with Google Maps and Microsoft’s Virtual Earth. This means users can interact with their trip itinerary in ways not possible with TriMet’s existing map.

For instance, you can click to see Google Streetviews of Transit Centers and Park and Rides (where available) and you can also interact with your itinerary as it’s laid out on the map. You can also zoom in and get detailed information for each stop location, such as amenities available (like bike racks) and see real-time arrival information via integration with TriMet’s TransitTracker service.

What’s even more exciting is that McHugh plans to overlay Metro’s popular Bike There! map any day now and she is also working with Wyatt Baldwin of ByCycle.org and a team of developers with hopes to integrate bike trip-planning into the map as well.

(The Bike There! map overlay would not be interactive, but it would be very helpful to see bike routes in planning multi-modal trips.)

Also on the bike-route planning front, McHugh shared her enthusiasm for a product created by one of her co-panelists, David Emory. Emory is a transportation planner and citizen activist from Atlanta who has devoted hours of work to create a very impressive, multi-modal trip-planning tool that includes bike-friendly routes.

McHugh told me that once Emory open-sources his software code, TriMet will take a serious look at integrating that into their map for a truly multi-modal trip planning service (versus just mashing various tools together like they’re doing now).

Clearly excited about the direction of this project, McHugh says,

“I never thought we’d get to this point. We were the first transit agency to have an interactive map, and when it came out in 2003 it was cutting-edge… but that was five years ago and it is clunky, old technology now.”

She’s also proud to have created the map with help from the open source community. “It’s been really great working with them, and it also means that the development can be done for a lot less money.”

High gas prices and record ridership numbers are not lost on McHugh. “Right now is a really interesting time,” she said, “we have a unique opportunity to change people’s routines, and we hope this tool can help with that.”

Currently, the map works best on Firefox browsers but McHugh says they’ll have all the bugs worked out for Internet Explorer by the public launch date of August 8th.

Check out the map at maps.trimet.org.

Wow. That is awesome. I love it when transportation geekiness and computer geekiness come together.

Wow. That is really cool. Just another in my growing list of reasons I need to move across the Columbia.

Btw, Jonathon, the link at the end of the story is to the Atlanta tool, not TriMet\’s.

It\’s cool, but I don\’t understand why TriMet always excludes CTran on these mapping systems. If they really want Max to extend into Vancouver…they should start working together on these great PR projects.

Are they looking for feedback? I had a couple of problems just doing a rudimentary test.

hmmm…why oh why didn\’t they just get in bed with Google and make a mashup!?! ugh

McIronyPants:
If you read the story you\’ll see it uses a combo of Google Maps and Microsoft Visual Earth. Cheers!

What’s even more exciting is that McHugh plans to overlay Metro’s popular Bike There! map any day now and she is also working with Wyatt Baldwin of ByCycle.org and a team of developers with hopes to integrate bike trip-planning into the map as well.

great news! too bad it doesn\’t already have the complete package and have the features that bycycle.org does… Bike trip planning needs that kind of exposure. I can\’t tell you HOW MANY people I have told about the bicycle trip planning features of bycycle.org who had no idea such a useful tool existed! Keep it up Wyatt and team!

I look forward to the day when Trimet gets serious about reducing the air pollution they create. Currently when a bus is ahead of schedule it stops and idles for two minutes. Ever wondered how many of these buses air idling at any given moment? Fact is idling pollutes.

The map looks pretty nice so far, but I\’m irritated that TriMet is using our tax dollars to extend Microsoft\’s monopoly. Why is it that TriMet won\’t touch David Emory\’s tool until he open-sources the code, but gets into bed with the most notoriously anti-open-source corporation in the world? Why the double-standard? Microsoft\’s \”Virtual Earth\” is useless to me and anyone who\’s freed themselves from the Borg, because Microsoft\’s embrace-and-extend modus operandi is to shut out anyone they can who\’s not feeding its coffers. TriMet shouldn\’t be using public money to help them.

Have folks checked out NYC\’s RideTheCity.com? It has options to select \”safer\” or more direct routes. Nice site.

@Michael Andersen (Contributor) M (#10):
David Emory? I\’m unfamiliar with him, and maybe the TriMet developers are too. I\’m assuming they picked Virtual Earth because the APIs are familiar *or* because of their server setup (which I\’m going to assume the latter – I\’ve worked at places where mentioning open source is akin to treason). Apparently they\’re using a Perl script for the old trip planner so it\’s kind of an improvement, but the new one is a little sluggish. The ByCycle planner is a bit speedier, though not by much.

Michael M. – my understanding is that TriMet is trying to swap out a lot of proprietary tech for open source ones.i know they use Geoserver (geoserver.org).

a lot of places tout their involvement with big vendors to make it look (to some people, at least)like they\’re doing something really world class.

open source and open standards will definitely help them make data available for public use, so hopefully they\’re taking advantage of that.

Yes having a mapping system with CTRAN\’s resource would be great, but Trimet would have to go this alone. CTRAN is so technologically slow it will be a long time to reach were trimet is.

Though it was always odd that TRIMET\’s web based transit scheduler never had Vancouver 7th Street as an origin/ landmark when the #6 MLK still ran up there. Or even now the CTRAN express buses do not come up on their system for rides in Portland.

Its like living next to the old Berlin wall.

Though I think Bycycle is interested in working with the City of Vancouver to extend its mapping across the river.

At least Trimet\’s new map has some of the major roads in Vancouver marked…so you can get an idea where to bike to once you leave the bus vs. just an unroaded land of mystery.