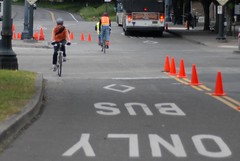 This morning I stopped by TriMet’s test of new bike access options through the Rose Quarter Transit Center this morning.

When I rolled up I was greeted by City of Portland bike coordinator Roger Geller and TriMet’s manager of capital projects Young Park. They offered a more detailed explanation of their concepts for safely and efficiently moving bikes through the Transit Center (bikes are currently prohibited from the area). 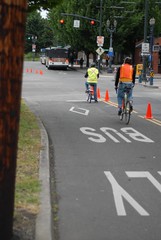 The plan so far is to create a new, two-way, green-colored bike lane (6 feet wide in each direction) on the west side of NE Wheeler Ave. from N. Multnomah St. to N. Interstate Ave. Their plans also call for painting a green bike box on NE Wheeler at N. Multnomah. This bike box would allow bikes to get a head start to get across the Multnomah intersection and continue northbound on NE Wheeler.

In addition, a new, flashing MAX train warning signal is expected to be installed at biker’s-eye level at the NE Holladay St. intersection.

On scene this morning there were a few people riding bikes through the coned-off bike lane test area and several TriMet and PDOT staffers standing around making notes and observations. The BTA’s liaison to TriMet, Michelle Poyourow had also showed up to test things out and offer her insights.

Young Park, with TriMet, says they’ve done pre-test evaluations and that they’re recording today’s test in order to analyze the results. TriMet is also surveying their bus operators about the possible changes.

Park says the cones will be set up all day today and he encourages bike riders to give the test configuration a try.

For the second part of their test this afternoon, Park says they’ll reroute some of the bus traffic on NE Wheeler and try out a new stop on N. Multnomah. That change would result in northbound bus traffic through the Transit Center going from 24 vehicles per hour to just 11 per hour — and would help minimize bike/bus interactions. 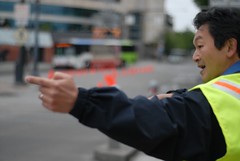 According to Park, the test is going well. “So far, so good,” he said, “there’s been no friction.”

As we chatted, we noticed several people on bikes come through that weren’t officially part of the test. They all used the coned-off test bike lane without incident and it seemed to work intuitively.

Park says they’ll take the next few weeks to evaluate the results of today’s test, and then decide on an option, make refinements and hope to have the new configuration up and running by late summer or early fall.

So I get a free pass to go through today!??! I am excited!

i\’ll modify my evening commute to check this out. this was one of my main reasons for taking the broadway bridge vs the steel is the difficulty getting around the Transit center.

I partook in this experiment earlier in the morning. Overall, it went really well, but I did have a few comments that I am willing to share:

– There is a lot of stuff going on when you are traveling through the center… busses, trains, people crossing the street (who even crossed when it was said \”Don\’t walk\” when there were 30 Trimet people there), as well as stop lights. People will just need to be ultra cautious when using the transit center.

– The bike box was a bit unsettling when you were approaching a red light at the intersection of Interstate and Wheeler at the same time as a bus. I think the box is necessary though because it will help prevent busses from going straight through the intersection, forcing a cyclist into oncoming traffic. Is this the first bike box that is being used to prevent something other than a right hook?

– I hope that if Trimet uses this new bike lane, all cyclist will obey the red lights through the transit center. It is wonderful that they are going to such extents to help better the cycling community by doing this study. The last thing we need is people blowing through the red lights making Trimet and other officials regret their decision to allow bikes through the intersection.

– Another point of interest: I ride down Vancouver to get into downtown, but take the little zig-zag by Emanuel to get onto the Broadway bridge because I like to avoid the Transit center in the morning. Today, since I was going to be involved in the experiment, I continued on down Vancouver to the crazy intersection where the freeway comes up parallel to Vancouver. There is a double green light for those heading south. I have never been through this intersection and was in the far right lane of Vancouver. I saw the light in front of me turn green, which was actually the light for the people getting off the freeway. I spoke with Roger Geller about the intersection and mentioned that the light needs to be adjusted so that you cannot see it from the adjacent lanes. Pretty dangerous if you ask me.

I am looking for to tonight when I can ride through the transit center legally!

is this intended to get bikers from the steel bridge/esplanade to vancouver/williams easier? that\’d be sweet

@B.C.
I ride the Vancouver route every day and yesterday had to shout STTTOOOOPPPP!!!! at new bicyclist that made the mistake of watching the ramp\’s light (as opposed to Vancouver\’s light). I fully agree that the traffic planning at that intersection is challenging to EVERYONE that uses it.

There are so many people in and around the transit center that I still think it will be a mess even with the change (aka people crossing when there\’s a do not walk). Will I still be able to take Multnomah and then the left on Wheeler?

The first time I saw the light turn green at that intersection on Vancouver, I thought it was for me too… I\’ve since learned to use the left hand side of that lane so that I can see the correct signal.

It would be hard to re-aim the traffic lights so car drivers (sitting in the left hand side of the lane) would still be able to see it from the freeway ramp, but bicycles, (sitting in the right side of the lane next to it,) wouldn\’t… What I think they should do is put a bicycle head signal there, pointed at that lane: The car drivers coming off the freeways would see the red bicycle light, and know that they should ignore it, but the bicycles would see that and know it applied to them. When it was actually our turn to go, we\’d get a green bicycle signal, which the freeway ramp users would know wasn\’t for them.

Ditto on the Vancouver off-ramp: Use the far left side of the bike/bus lane to be able to see the green fresnel.

And even after you get a green, always, always do a double check over your right shoulder to make sure somebody hasn\’t spaced the red on the ramp. (Too many close calls to count)

it took me a trip or two to really understand that vancouver intersection as well, it also confused my friend when he drove through in a car, its a one of a kind intersection as far as I know.
I\’ve been going through the rose quarter a bit more lately (I usualy go over the broadway) and have experienced that it is aukward as it is, but it is such a useful conection to the espanade that if it was tweaked a bit it would seem like it was designed to move bike trafic through to N portland. It so useful that I\’m going to do it anyway if I slow trafic or not.

My wheels are down at bike central getting trued, and a couple new spokes, So I took the bus downtown today. Going through the RQTC, I overheard the bus driver saying \” Yeah they are trying out this new bike thing through the transit center, but you know….. I just think that buses and bikes… They just don\’t mix\”. I feel like that is the kind of attitude that gets a cyclist hit by a bus.

B. C., you are correct. If everyone isn\’t careful and if anyone decides to do his own thing without regard to the rules of the road, we are looking at multiple fatalities. Respecting the rights of others, looking out for pedestrians, using common sense, and obeying the rules of the road is the only way this is going to work.