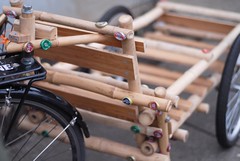 I first spotted Clark’s work on a flyer he’d posted outside of a bike shop. Then yesterday, as I rode home through the Boise-Eliot neighborhood, I saw a bamboo trailer and stopped to check it out. No one was around, so I rang my bike bell and sure enough, out walked the man from the flyer.

Elden was loading up his trailer with a load of laundry (he said it could carry over 400 pounds) and I took a few minutes to learn more about his work.

Elden builds custom bike trailers out of bamboo stalks and bamboo flooring. He said he starting making them several years ago and hopes to some day give up his day job as a window washer and build trailers full-time.

He proudly showed me a few of his creations. The trailer he built for himself he calls the “step-ladder” model. It has ample room for cargo and then it swivels up and extends like a step-ladder — giving him a bit more height for reaching those high windows. 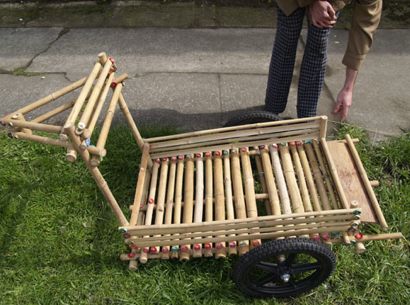 Elden says the price for his trailers depends on the style, but would range from about $250-400.
(Photo courtesy Elden Clark)

He has also made “landcaper” and “bottle collector” models and he talked excitedly about plans for an amphibious version. “It would be made out of cork and hollow-core bamboo and would be bike powered with paddles.” 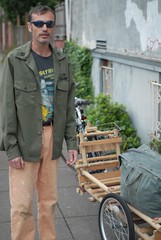 Right now, Elden says he buys his bamboo from a local distributor but someday he hopes to grow it himself. He invited me back to his shop to see some of his tools and learn more about how he builds these awesome trailers.

If you’d like to contact Elden and have him build you a trailer, send an email to blockandtackle [at] gmail [dot] com.

Stay tuned for more from Elden and in the meantime, you can look for him washing windows at businesses in the Alberta and Mississippi Street areas.

Way cool. How much?

Hey I checked Craigslist last spring for locally built trailers. Still haven\’t bought one so I\’ll keep this in mind.

Met him last weekend… need to upload my own pics (trailer not included).

Bamboo is an agressive invasive species. There is nothing \”sustainable\” about it.

Oh yes! Bamboo is evil! It would be way more sustainable to build it out of mined steel! Or cut some old growth trees down — it\’s mighty durable you know!

If you\’ve got to put it in a container, it must be evil! Down with bamboo! It grows to fast and in too little space to be sustainable!

Some bamboo is invasive. Some is not. Bamboo doesn\’t spread by seeds, but by roots. If you can contain the roots, it will not spread. It works very well in deep planters.

My objection is not to bamboo per se, but rather the abuse of the word \”sustainability.\” It has been diluted to the point that it has lost any real meaning.

Oh yes, you are right. There is nothing about bamboo, that grows like grass and has properties of wood that could ever be considered sustainable. Thanks for keeping us all straight on that.

Way to go Elden! good to see you following your dream.

I want one of those trailers. Sweet design. Much more SUSTAINABLE than making them out of STEEL, or other metals.

Could someone tell me if my use of sustainable has any meaning or not?