Making sense of bikes in the CRC DEIS 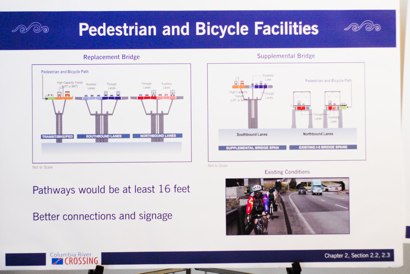 The Columbia River Crossing project is set for some major decision points in the next few weeks.

Metro, the Portland Planning Commission, and the Portland City Council will make their decisions on what should be the Locally Preferred Alternative (on June 5th, 10th, and 12th respectively). Their decisions will be based in part on information about the five alternatives (including a “no-build” option) laid out in the 5,000 page Draft Environmental Impact Statement (DEIS) that was released on May 1st.

Buried within the DEIS is information about how bicycles and pedestrians figure into the project. To help wade through the immense document, the CRC staff has released a memo that includes maps of the proposed facilities, and lists the specific page numbers in the DEIS that deal with bike/ped issues.

Some say that the DEIS falls far short of the “world class” bike/ped facilities that have been promised. Back in April I published a guest article by Matthew Denton that outlined his concerns about What the CRC really gives bicyclists and the Bicycle Transportation Alliance (BTA) had hoped for much more than the “16-foot” width mentioned several times in the DEIS.

The BTA’s Emily Gardner is a member of the CRC’s Pedestrian and Bicycle Advisory Committee (PBAC). She says, “We are concerned that a reference to a 16-foot path in the DEIS is a tacit approval of that as a width for the facility.”

The BTA has advocated from within the process for 20-foot paths on each side of the bridge. But as I reported on a few weeks ago, the DEIS did not address most of the recommendations the BTA had pushed for.

That’s no cause for alarm according to CRC staffer David Parisi. Parisi, who manages the PBAC, says the DEIS is just a starting point. He maintains that the DEIS is nothing more than an “evaluation document” and that the decision of a Locally Preferred Alternative will only “set a general framework for the actual design.”

In an emailed response to my story about the BTA’s involvement with the project, Parisi wrote,

“The Draft EIS has left room to consider BTA positions like a path wider than 16 feet, paths on both sides of an improved river crossing, and a variety of access points to one or two paths.”

“The best time to be at the table to work with engineers on incorporating design details like the BTA recommendations is over the next year or so while the design is developed further.”
–David Parisi, CRC

Parisi echoes sentiments shared with me by CRC Task Force member Rex Burkholder (whose public support of the project has surprised many) that the project’s design is still in its infancy and that the real work is yet to come.

Parisi says that the CRC staff has yet to start the actual design process that might mollify some critics and that the real work will happen over the next year or so. He writes:

“It is important to note that deciding upon an LPA [Locally Preferred Alternative] is not a commitment to build a project, it is a statement of regional support for one project alternative… The best time to be at the table to work with engineers on incorporating design details like the BTA recommendations is over the next year or so while the design is developed further…”

The BTA’s Gardner says the main task of her and her colleagues on the PBAC is to demonstrate the need for larger bike facilities, when, as of right now, the number of people crossing the bridge under their own power is very low. Their challenge will be to convince CRC staff that a bike/ped facility even larger than what exists on the Hawthorne Bridge should be built, when the numbers and projections show that it could be 15-20 years before a new I-5 bridge sees similar levels of human-powered traffic.

This dance between advocates and CRC staff is likely just an act — with each side playing their assumed role. Parisi — who many sources tell me is a very bike-sensitive person — is playing the role of the hardened bureaucrat, doing what he can for an important stakeholder group (bike and ped advocates) within the strict framework of The Process.

Meanwhile, the BTA is playing the role of concerned advocate, doing their best to play by the rules, while also trying to bend them as much as possible.

What can we do as concerned citizens? Both Parisi and Gardner say that comments about the bike facilities within the official DEIS comment period are essential and that all comments collected before July 1st must be acknowledged in the Final EIS.

Also important is the Metro Council Hearing this Thursday. Whether you support or oppose the project, Metro Councilors will take an important vote and your voice needs to be heard.

I am disturbed by this. Has anyone addressed that we are just moving the I-5 choke point closer to the city?

i wonder how the car free conference attendees will react to such news.

\”we spent all our transportation dollars for the next decade on one world-class bloated project.\”

This is a 5 billion dollar gift to the
single-occupancy, motor-vehicle drivers of
the world. When will the subsidy ever end ?
RIGHT HERE, RIGHT NOW. NO CRC !!!!!!!

i don\’t care how freakin\’ wide the bike path is, this thing is a Dawg…with a capitol \”D\”…arf arf.

Glad that at least 3 Metro reps. recognize this.

There is no sense to be made here. You can put all the lipstick on this bridge, but it will still be a pig.

I don\’t understand what the urge is to subsidize Clark County\’s persistent refusal to engage in anything resembling Urban Planning. If the people living there don\’t like their commute, then maybe they should live closer or get a job at one of the local industries, like Walmart or Pre-Manufactured Home Sales.

After talking to many Portland bicyclists – I assume most bicyclists posting on BikePortland do not ride a lot in far north Portland and likely have not biked across the I-5 bridge.

I have set aside a Pedal Palooza event for y\’all:

So here is your chance to come out – get a bike tour of the bridge – see the proposals for the bike and ped portion of the project – and then comment on the DEIS comment card. (And a beer.)

Think of it as voting vs. just complaining about the president at a bar or on a blog.

And remember a \’no\’ vote is just as important as a \’yes\’ vote for the DEIS process.

But if you vote no then the work really starts – to find a mutual solution.

Guest
the other steph

Todd, look forward to the ride.

Let\’s all show up at Metro tomorrow, Thursday, June 5, 2pm, to show our support for Metro Councilors Liberty, Collette, and Hosticka who have proposed an alternative to the massive bridge that starts wtih tolls and seismic retrofitting the existing I-5 bridges. Couldn\’t we do a Hawthorne Bridge like widening of the sidewalks at the same time?
The CRC\’s replacement bridge proposal will eat up transportation dollars for several generations according to economist Joe Cortright.

Looking at the graphic with the two bridge options, I would imagine that the second option (titled \”Supplemental Bridge\”) lends itself perfectly to a gradual approach, where the current bridge would first be retrofitted with a bike/ped path extension similar to the Hawthorne Bridge (in addition to seismic upgrades and possibly even at both sides of the bridge) and then figure out how extensive a supplemental bridge would need to be (just mass transit or mass transit + extra lanes for cars).

I would encourage the BTA to advocate for this in a vocal way at the upcoming public hearings and at the CRC PBAC.

But I am asking those interested in making our community a better place with safer bicycling and pedestrian facilities to come out (experience the bridge) with open eyes and ears to learn and discuss and share ideas…not just blog out on the sidelines and stay home. Work for a solution.

Let me just say that I am happy the price of gas is finally getting up to where it should be. Now the costs of \’single-occupancy automotive commuting\’ across state lines will finally be more expensive than the tax breaks so many are after. TOLL THE EXISTING BRIDGE, then lets talk about whats next.

BTW, won\’t that bridge be under water in a few years, when greenland melts into the atlantic? just wondering…