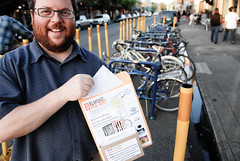 By the end of this summer, sculpted sunflowers will adorn the on-street bike parking (PDOT calls them “bike corrals”) on Belmont Street.

The project is community-wide effort being spearheaded by Greg Raisman, a Sunnyside neighborhood resident who was also instrumental in the creation of Portland’s first bike corral at Mississippi and Shaver streets in North Portland.

According to Raisman, the Belmont Bike Art project will bring six sunflowers (which happen to be the official symbols of Sunnyside Neighborhood) to the existing bike corrals on Belmont at SE 33rd and 34th streets. Raisman is working with local artists and business owners to fund and carry out the project.

The plan is for everyone in the community to draw up their own designs for the sunflowers and then let the community choose which designs should be turned into reality. 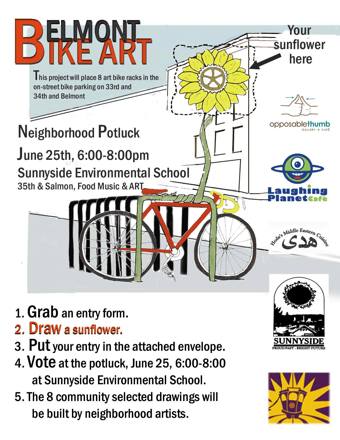 Last week, Raisman delivered little stands with pencils, paper, and instructions on how to participate to eight locations in the immediate area (see list below). “Anyone can draw as many flowers as they’d like,” says Raisman.

Once all the designs have been collected (deadline is June 18th), they will all be displayed at a potluck event on June 25th at nearby Sunnyside Environmental School.

Attendees of the potluck will vote on their favorite drawings and the top six vote-getters will be turned over to a team of four neighborhood artisans who will then build the sunflower racks. The artists are cargo trike designer Bill Stites, sculptor Matt Proctor, bicycle builder Sacha White, and sculptor Tim Yohman.

Raisman says support from local businesses has been key to making the project happen. Richard Satnick, owner of Laughing Planet Cafe has given several thousand dollars to the project and Hoda’s Middle Eastern Cuisine has also contributed.

Stay tuned for a look at the winning designs and see the list below for locations where you can submit your sunflower design.

Thanks for the great article, Jonathan. I can\’t wait to see the creative sunflowers drawings that people submit!

I\’d be remiss not to mention the huge amount of neighborhood volunteer time that had taken this project as far as it has come.

Bring on the sunflowers!
Greg

The bollards around those corrals are
really ugly. Hope they\’re phased out.
Good luck with the flowers. –Dan–

[Thanks Galen.. I\’ve made the correction — Jonathan Maus, Editor]

This is a great idea — public art that promotes cycling! Can\’t wait to see it.

Thanks for the feedback. But — don\’t forget to stop by and draw a sunflower. The more drawings the better!

The mathematical genius of the sunflower and the creativity of our community coming together to beautify our bike parking. How kick-ass.

Keep spreading the word. This is fun opportunity for the community (both artists and non-artists) to make a little magic happen in our neighborhood… conception to finished sculpture.