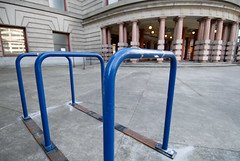 The City of Portland has added 12 parking spaces in front of City Hall to accommodate visitors and employees who arrive by bike.

Two sets of three staple racks each have been installed on both sides of the building’s plaza at the SW 4th Avenue entrance.

Last fall, the city installed 16 staple racks (capacity for 32 bikes) during the BTA’s Bike Commute Challenge. The racks were intended to be temporary, but Commissioner Adams’ office tried to make them permanent. In the end, the racks were removed, so it’s great to see new ones spring up again.

Bike parking at City Hall is at a premium during certain meeting times and events. These new racks will also help stop the practice of locking bikes up to the railings of wheelchair access ramps at the front entrance.

There is a covered bike parking facility on the 5th Avenue side of City Hall, but that one is usually full.

Fantastic news! I love the symbolism of bikes parking right next to the main entrance. Thanks to whomever made this happen (PDOT? Sam\’s office?).

Jonathan, the Bureau of General Services has also installed additional \”staple racks\” in the loggia (the covered outdoor area) of the Portland Building.

Why do they mount the racks on a strip of unprotected of mild steel. Is rust not a problem?

I\’ve noticed that before with other racks.

I know I can look this up, but I\’ll ask out loud in case the answer is useful to others, too: Who at PDOT is the contact for requesting additional bike parking, these days?

I know, I\’m being nitpicky…but I would like to see, IN THE NEAR FUTURE, those staple racks replaced with fun, innovative racks created by local artists.

The photo below is more realistic. It shows anyone here in 2006 that we need more frekin bike parking. It shows we have to fight for the most obvious things. Get a clue city hall and the Dept of Transportation.

here is a photo link I took.
http://tinyurl.com/5mpk9f

Cops are wasting time buggin the good car drivers near bike boxes. What good are bike boxes without cracking down on the really bad drivers?

Quoting Kasandra: Who at PDOT is the contact for requesting additional bike parking, these days?

Howz about some of those racks in front of the Portland Building too, for cryin\’ out loud???

I believe they just hired someone new about a week ago to handle bike rack requests. I heard something about a huge backlog so they needed another person.

where can i buy (locally) a basic rack (installable in concrete of course) for my house??? any suggestions?

To Carl: There are several local vendors that build bicycle racks that would appropriate for private rack installations. You can give me a call on 823-0805 and I would be more than happy to forward a list of them and explain how the permit process works.