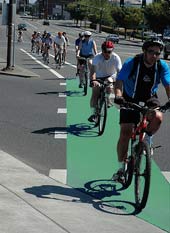 Remember back in December, when I shared how PDOT was contemplating what color the new bike boxes and colored bike lanes should be?

I asked PDOT’s bicycle coordinator Roger Geller why. He said their decision stems from the National Committee on Uniform Traffic Control Devices, who is recommending that green be the color for all “colored bicycle facilities.”

Geller added that, in part, the national committee recommends green because blue is already assigned for disabled parking and “there’s concern it could be confusing to have a curb-tight bicycle lane colored blue.”

Other factors in PDOT’s decision were that other cities have started using green already, and Geller says, “we decided it would be prudent to not buck the trend.”

The green color will be used on the bike boxes and painted bike lanes coming soon to 14 Portland intersections and city crews will likely paint over the existing blue bike lanes next time they are maintained.

Later next week, I should have an update on PDOT’s educational marketing campaign surrounding the installation of these new bike boxes. Stay tuned.

Well, if green is what\’s going in the MUTCD, that\’s what\’s got to happen. I understand that the Federales are incredibly inflexible about these sorts of matters.

Awesome! I know that drivers tend to be the lookout most for green and red as they\’re fundamental colors to the driving experience. As such, green has a better chance of catching their attention than most other colors. I\’m excited for the planned changes.

Yeah, green means go – as in any driver wanting to cross does not have to yield, right?

Just kidding – I think green is fine except it will be a little less visible at night.

I\’ve gotten very fond of our \”blue bike lanes,\” and I think the phrase has a certain ring to it, but I\’m sure I\’ll get used to green.

Or is it special paint?

Brian…it is not paint…usually a skid resistant thermoplastic or specialized pavement top coat is used.

When San Francisco tested paint colors for their sharrows program, green was a miserable failure for visibility.

Blue is for Bikes.

Uh, if green is the new national standard… what about those states where green means 15-minute (or otherwise short-term) parking zone? So, it\’s not OK to confuse people by painting it blue, which means only those with a disabled placard can park there, but it\’s OK to paint it green, which in some states means that anybody can park there, as long as they don\’t park there for too long?

Good idea! Hard to see on dark, rainy afternoons; virtually invisible during hours of darkness. Any bets on how many fatalities it will take before cyclists start to bitch/blog about it?

not to mention that all these new bike lanes will still be to the right of right-turning motorists, since PDOT apparently has no concept at all of \’destination positioning\’ for cyclists, which seems like a giant step backwards, since PDOT was striping bike lanes to the left of right turn only lanes just a few short years ago…

I was sure it was going to be hot pink.

I have to second Burr\’s concern about the continuing right turn issues, whatever color they use.

Yeah, pink, all the way.

PINK! With embedded blinkies and glow-in-the-dark paint! Do it!

The reason \”Federales are incredibly inflexible about these sorts of matters\” is that it\’s vitally (literally) important that control measures, signals, signs, etc. be the same from one jurisdiction to another is that having changes across jurisdictional boundaries is extremely confusing to drivers and leads to crashes.

Imagine coming to an intersection at which the STOP sign, instead of being a red octagon were a brown triangle. Things would get ugly in a hurry.

I wasn\’t aware that green is being used for short term parking. Perhaps it\’s under a temporary, experimental permit as with Portland\’s blue lanes.

If so, the green parking will probably change sometime in the future.

OOPS! That 1st sentence is horribly jumbled – probably doesn\’t conform to Federal standards. I should have said:

The reason \”Federales are incredibly inflexible about these sorts of matters\” is that it\’s vitally (literally) important that control measures, signals, signs, etc. be the same from one jurisdiction to another. Having changes across jurisdictional boundaries is extremely confusing to drivers and leads to crashes.

Imagine coming to an intersection at which the STOP sign, instead of being a red octagon were a brown triangle. Things would get ugly in a hurry.

I think that since you are taking away right hand turns on red and using Trans funds for this project we should start making bikes that use city street pay a licence fee. why should motorists pay for your pet projects?