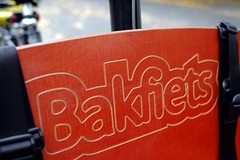 Northeast Portland native Jamie Nichols “totally flipped” when he saw his first Dutch bakfiets cargo bike. He sees them as the perfect way to replace the family car for short neighborhood trips and even sees them as an answer for what he calls “a looming fuel crisis”.

That’s why for the past two years, he’s been conceptualizing and designing his own version of the popular Dutch bakfiets design.

Nichols has worked with a private metal fabrication contractor since he was 17. Now 26, he has just received materials to build his first two bakfiets prototypes.

“We’re looking for these to be a gateway project to other, locally made utility and cargo bikes…I think we’ve got plenty of people building great commuter bikes, but what happens when you need to carry your groceries? I think families that say they can’t go to the store by bike because they have kids will think twice with a bike like this.” 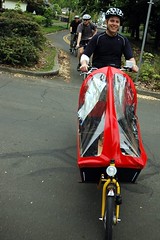 A bakfiets from Holland,
ridden by Scott Mizee.
[File photo]

Nichols and his partner Phillip Ross also want to make this a truly Portland bakfiets. Ross says that so far, he’s secured about 80% of the materials for the bike from local sources, including the 4130 steel to be used for the bike’s frame.

Nichols says that once complete, his bakfiets will be hard to differentiate from the Dutch versions that are becoming more and more popular in North America. He claims that one benefit of his bike will be that all the components will be universally available in the United States (and therefore easier to purchase and repair), which is not the case with the European models.

He has also come to appreciate the near perfection of the 100 year-old Dutch design,

“I had no idea it would be this complicated to replicate the bakfiets design. It’s a very refined product, especially when I’m trying do it better.”

Local bakfiets importer Clever Cycles have yet to open their doors, but they’ve already sold over half completely sold out (!) of their first shipment. With that kind of interest, it seems like there’s plenty of room for more than one local bakfiets source.

Nichols wouldn’t say when we can expect the first prototype, but he and Ross said they’ll keep in touch with any developments.

Corrections Jonathan: On June 1 Clever Cycles will have a pulse, be open, but NOT have a grand opening. Just being open will be grand in its own way. Real grandeur will have to come later after, say, the floor paint has cured. Also, we didn’t sell more than half our first Bakfiets shipment; we sold out.

We met Phillip last autumn to talk bak. We wish ’em great success and hope we can buy their frames and/or bikes for resale eventually. Meanwhile we hope to continue demonstrating the existence of a market for such bikes, regardless of provenance; that may be the best way we can help now.

Thanks for the post Jonathan, and thanks Todd for the kind words. I can’t wait to see Clever Cycles new location!

For everyone out there Todd and Dean are great guys – make an appointment to ride one of the Bakfiets if you haven’t yet.

Regardless of where it comes from – the cargo bike is here to stay!

I totally support the work that Jamie and Phillip are doing, this is exactly what the cities of the U.S. – and the world – need.
It’s great to see the consciousness expanding about these types of vehicles. Carrying cargo is something I’ve been advocating for since … since … a long time. While I tend to sit my cargo on 3 wheels, these bikes are fantastic – no doubt about it.
Such vehicles truly help fill the huge gap between the bicycle and the car. Let your imagination run wild as to what could be developed in this grand niche.

It’s worth mentioning what the folks in Eugene have been doing for a while:

They don’t have the same appealing wooden cargo / kid box as the Dutch cycles, but they may interest some people.

CAT has been working on a wooden container this year, and the pictures of the first one are up at

That said, we want to thank all the folks who have said nice things about our bikes on these pages. You are all appreciated.

Any updates on this project? Let\’s see the Portland Prototype Bakfietsen…

it all looks very nice promoting those bakfietsen with the childcovers, but we have designed the covers with the designer of the bakfiets, mister Maarten van Andel. The three \”gentleman\” P.ross, R. Wilson amd D. Mullin, they know each other very wel, ordered the raincovers, childcovers and our own design unique panniers by our company and then they had mister T Fharner copy them in China.
I can live with all that but what disturbs me the most is that they don\’t pay their bills, so they let a small company like ours pay for shipping and labourcosts and expensive material. you can be very proud of yourself indeed!

Wow Diana… I had not read your post until now when someone linked to it. I don\’t know anything about this issue except for the post I see here. I ride almost daily a bike with Clarijs panniers on them and I love them.

I am sad to hear that it sounds like you were deceived on your end of a business deal. I hope that in the 6 weeks time since your post, this issue has been resolved.

hi – wondering if i can get a portland version of my bakfiets when i arrive there in july and therefore sell my bakfiets here in amsterdam!

I feel entirely mislead my Clever Cycles—I bought a bakfiets from them 5 weeks ago, and after only a week or two stitching on the cover started breaking. Specifically, the stitching that holds the stay in place that runs from the top to the bottom of the cover broke, making the stay poke out toward the rider, and the cover collapse on the passengers. I just spent an hour fixing this, and noticed the “made with pride in China” label. Shame on you, Clever Cycles, for selling such an inferior cover with this fabulous bike. I’m now left wonder where the stitching will fail next? I would return it, but I live 3 hours away, and it isn’t worth the drive.