Well I had my doubts whether or not it would ever happen, but after some ads popped up recently it was just a matter of time…

And now it’s official, the Batavus “Old Dutch” bikes have landed in America. 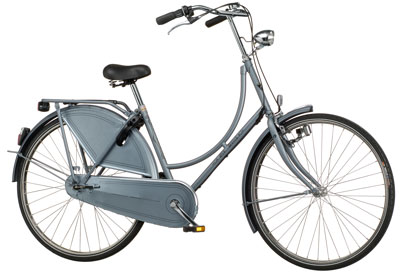 Nothing compares to the elegant simplicity of an
authentic, working-class Dutch city bike.
The Batavus “Old Dutch”. MSRP $799

I got an email Tuesday from my contact at Seattle Bike Supply (the U.S. importer) who said,

He’s excited. So am I. I’ve got one on the way for a review and photo-shoot.

For more details on this and the other three Batavus models that will be available in the U.S., check out this post from my old friend Tim Grahl at Commute By Bike.

So will any shops in Portland carry them?

Clever Cycles has one on order for evaluation. Our non-grand-opening is still on track for June 1. We have quite a few better but more expensive Dutch city bikes on the ground here, just about ready to ride: http://www.flickr.com/photos/cleverchimp/512512430/in/photostream/

Wow. What are the specs on one of these (i.e., mass, components, etc)?

peder,
here are the specs direct from Batavus:
===
The Old Dutch

Here is the bike famous for its traditional looks and quality that has lasted over one hundred years. 28” wheels using stainless steel rims and spokes give a luxurious ride coupled with an easy to use 3 speed with coaster brake. Complete with fenders, integrated lock, rear rack, lights and bell, just the way it has always come.

Are bike shops going to generally carry replacement parts for these bikes (e.g. 28″ tires, tubes, wheels, etc.)? Or will parts have to be special ordered?

Mechanics: Are the Dutch bikes just different enough to cause you headaches when they will inevitably have to work on them?

I’m excited about the prospect of all these great Dutch bikes coming Stateside, but am also concerned about how easy or difficult it will be to actually maintain my use of them.

those are good point elizabeth.. and I’ll let a mechanic answer them.

my two cents is that you should expect much less maintenance on these bikes than you’re used to with american bikes. The tires don’t flat as often, the wheels don’t go out of true, the chain doesn’t get dirty, etc… they’re not perfect or 100% maintenance free… but they definitely don’t require as much fiddling with as you might be used to.

As much as I love the classic design of the Batavuses (Batavi?) and Bakfiets, I keep thinking back to the fact that Amsterdam is totally flat. A 3-speed bike is perfect for the geography.

Portland, needless to say, is not totally flat. And I’m not just talking about the west hills. Is there any possibility of riding a loaded Dutch 3-speed up NE 33rd to Lombard? Or even up Steele going to 39th?

I guess that’s my way of saying the Dutch bikes are a step in the right direction, but maybe not perfect for Portland. What about putting an 8-speed Nexus internal hub in one of these for climbing?

It’s a matter of patience, Aaron. 1st gear on most 3-speeds is LOW.

Point of reference: Kirsty Hall did bike delivery for PDoT last year (as part of the Northeast Hub program) and did a good chunk of her deliveries on a 3-speed…up the Alameda Ridge…pulling a fully-loaded trailer. Hardly the ideal bike for that, but my point is: people underestimate the range of a 3-speed. It’s pretty huge.

Um, Aaron at the risk of verging into spamminess, 8-speed Nexi are on the Dutch city bikes and bakfietsen Clever Cycles will open with 1 June. Default cog gets you a low gear around 30″, and you can get it down to near 20″ (at the expense of not having much top end). Front brakes too — imagine!

Batavus has a whole line of bikes, geared and not. This offering is only scratching the surface.

Have you seen the KHS “Green”?

It is not a Dutch Bike, but it is similar.

Elizabeth: As a bike mechanic (over 26 years experience) I love these bikes. They are sensible and a joy to work on. Not all mechanics agree with me, especially when dealing with the chaincase, but all will agree that these bikes are made to be ridden with next to no maintenance. Most of the parts are interchangeable with commonly available components; if you destroy a rim, you may not be able to find the same stainless steel hoop that is standard, but any 700c alloy rim will be fine. One thing riders in hilly terrain might want on the Old Dutch is a front drum brake. Otherwise, just ride.

Elizabeth – I’d agree with Val. I have 2 Nexus equipped Dutch bikes, a Bakfiets (8 speed) and a Jorg&Olif Omafiets (7 speed) and neither has needed _any_ maintenance over the last half year of regular use other than to occasionally pump the tires back up to proper pressure. It has been a real eye opener. You just don’t have to think about these bikes, you just ride them 😉 My favorite thing is the enclosed chain case – the chain always stays lubed and clean since it’s not exposed to the elements.

Everywhere in SE, NE and downtown/NW/Pearl that I ride the Nexus hubs provide plenty of range for climbing hills. I’d also second Val’s recommendation for getting a bike with drum brakes on front and back – they are wonderfully effective on rainy days. These bikes are quite heavy, so extra braking power is a welcome thing.

I may go a tiny bit slower on these bikes than I would on my touring or road bike, but I also don’t spend time anymore changing shoes, trying to find lights or pants clips or peeling lycra on and off every time I ride… And even formal wear looks Fab on Dutch bikes, so what’s not to love about them?

I’m looking forward to trading up from an Amsterdam to a real Dutch bike. I’ve found the Amsterdam to be hard on my knees, either from the cruiser geometry or fewer number of gears.

I must say though, I’ve never gotten more spontaneous comments about how nice my bike looked. Still, I ended up taking off the rear panels because they’d keep unclipping and falling into the spokes at the slightest disturbance.

Check out Curbside Cycle in Toronto. They were the first shop to bring Batavus into North America. They also sell Moulton and Biomega, two bikes on my wish list! http://www.curbside.on.ca They sell some of the stuff online too.

Wheelworks in Eugene, Or. is also carrying Batavus bikes. I remember talking to them a few years ago that Eugene was ripe for this kind of bike. I knew the market was there. I was trying to find out how I could get a Gazelle imported. Now I don\’t have to!! Omafiets, here I come. . .

I got my Batavus Old Dutch from Curbside (I\’m on the east coast of the US; no one here carries them). They shipped it to a shop in my town where it was assembled. I am thrilled with the bike and the people from Curbside were very helpful.

I looked at the Electra Amsterdam a while ago, BTW, and the Batavus is much better quality.

I just rescued a 1984ish Batavus Winner from a barn in southern wisconsin. It closely resembles an \”Old Dutch\” and is getting some new tires today. I tried to find a website to find out how much the bike is worth but my dutch is a little rusty. If anyone could help in this matter it would be great! The bike is in excellent condition once it had a bath. I can\’t wait to get it back from the bike shop and start riding.

I recently had a terrible experience trying to obtain a Batavus Old Dutch Bike from City Bikes in Washington DC.

They took my deposit, claimed to have ordered it, and when the date I was supposed to pick it up rolled by, didn\’t even bother to let me know they couldn\’t get a hold of it.

While I am upset that I will not be getting the bike from them (and want my deposit back and more for the 3 weeks I waited for it!) I was wondering if anyone had any advice of obtaining the Batavus Old Dutch bike…

If you had any info, I would be very grateful!