[The cherry blossoms are
already blooming down here.]

Today was another action-packed day here in San Jose at the Handmade Bicycle Show.

I finally got to meet Kirk Pacenti. Kirk is a former product designer at Bontrager and is well-known in the framebuilding world for his lugs (the things that join frame tubes together), but I wanted to talk with him about his plans to move to Portland.

Currently based in Tennessee, Kirk is ready to immerse himself in the Portland bike community,

“Chattanooga is a great place to live, but as far as bikes go, you’re sort of in a vacuum. I’ve spent time in Portland over the years and have always thought it was a great city.”

Kirk said everything is set and he plans to be in Portland by this summer. This is great news, because Kirk is a very talented guy and he does much more than just lugs. At the show he unveiled his plans to produce 650B mountain bike tires and he told me he hopes to do more product design in the future.

Even though most people only know of his lugs (he sells to most of our local frame builders) his background is in mountain biking and he actually had a Pacenti-designed mountain bike on display.

It will be great to have Kirk in town. We could use some new energy around the mountain bike scene and his presence will be enthusiastically welcomed by the entire community. 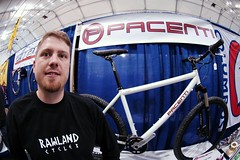 [Product designer Kirk Pacenti is on his way to Portland.]

I also kept my eye out for longbikes today. Longbikes are the name given to bicycles that are inspired by the Xtracycle, but are built from the ground up with an extended wheelbase and allow for great cargo and/or people carrying capacity.

One of the original versions of this type of bike was the “Xtravois” made by Todd Fahrner of Cleverchimp fame.

Scott Dion, founder of Fraser Cycles, has been building longbikes for four years and after seven prototypes he has arrived at his “Pack Mule” model.

Dion (Fraser is his middle name) explains the Pack Mule as a tandem without the rear drivetrain and he uses his to take his 8 year-old to swim practice near their home in San Diego, California. He says the comfy rear seat (hard to see in the photo above) is made for kids 5-10 years old. 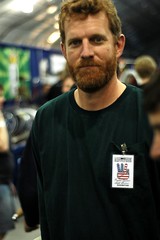 Dion knows we’d love his bike around here and he has already connected with Todd Fahrner, our local cargo bike guru, and he even knows about bike moves,

“My bikes are built for a place like Portland. Here in San Diego, people don’t really get it. When I saw photos and learned about your bike moves on the web, I nearly cried because I finally realized their were other people like me .”

Well known custom builder Sycip also had a longbike on display. Most notable is the integrated Stokemonkey. 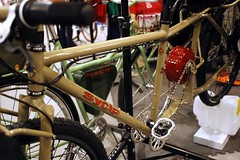 Sycip has a great reputation in the industry and I’ve heard rumors they might consider moving to Portland.

They’ve got family in Portland and I noticed custom bike enthusiast Maria Thi Mai (outgoing Policy Director for Commissioner Sam Adams) chatting away with Jay Sycip in his booth. Hmmm…

With bikes like this little charmer, we can only hope the Sycip brothers pack up and make the move, 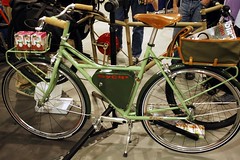 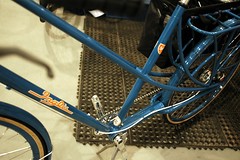 As promised, I also got some close-up shots of the vintage front derailluer and handpainted pinstriping on Tony Pereira’s beautiful randonneuring bike:

And finally, a few odds and ends…

By request of a commenter to my previous report here’s a few shots of the brilliant Italian framebuilding legend, Dario Pegoretti: 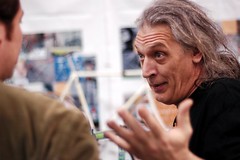 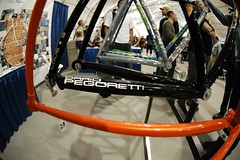 Here’s some artistic bike parking in front of the show: 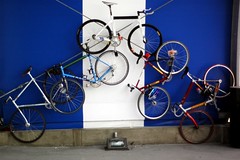 And this is the strangest bike I’ve seen. It’s a recumbent made out of wood. Here’s the website of the guy who built it: 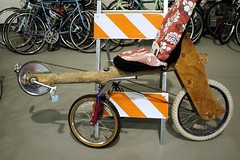 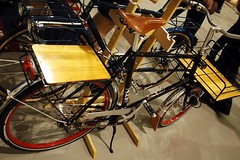 OK, lots more to come. Tomorrow I’ll look for more cargo and city bikes (they’re all over the place!). Thanks for tuning in.

Re: that wooden bike

Some of his other bike designs are also very creative, such as the miniscule seat-on-the-headtube, steer-from-behind, crutch-for-a-sissybar triangle minibike. Makes me wonder if any of the Chunks or Zoobombers are in attendance.

Someone ought so show off Robert’s futuristic mobile-bike-home, the one which has been gracing Ankeny for the last few months.

That A.N.T. bikes cargo bike is fantastic. Please tell me they sell bikes like that? And they ship to Canada?

great to see pegoretti, his work is stunning!