In case anyone gets the wrong impression after my post about Berkeley’s bicycle boulevard efforts, I thought an update on Portland’s progress was in order. Here are a few things I’ve come across just in the past week or so.


“Over the last few years, Foster Boulevard has experience a high number of injury crashes involving kids on bikes. Developing this bike boulevard will dramatically reduce the number of kid and adult bicycle crashes and will likely increase the overall number of bike riders.”

PDOT traffic safety and crash experts love bicycle boulevards because, as one of them puts it,

“While 70% of Portland’s roads are residential, only 20% of bicycle crashes happen on residential streets. Boulevards provide real transportation options on these pleasant, lower crash-rate streets.”

PDOT is considering the following improvements in the SE Foster area:

PDOT is now working with various neighborhoods to sort out the details.

North Portland
On the other side of town, neighborhood activists in North Portland are speaking out about bicycle boulevards too. At the recent PDOT Budget Forum, someone mentioned the need for a safe bypass to N. Lombard Blvd. She also added that the term “bicycle boulevard” may not go over so well in working-class North Portland. She prefers “Local, non-motorized corridors.” Sam Adams disagreed and said, they have no reason to think anyone will push back on the existing term.

One N. Denver Ave. resident wonders if neighborhoods can designate their own streets as bicycle boulevards:

“Is it possible for a neighborhood to declare a street as a bike boulevard and then get the city to mark it as such? If so, would it be possible to get the neighborhood associations to take action on this?”

I doubt it, but I’m sure PDOT will be glad to listen to neighborhood input. Roger Geller would be the man to contact [roger.geller[at]pdxtrans.org]. 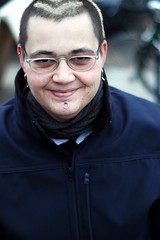 As part of their Bicycle Boulevard Campaign, the BTA’s new policy advocate Emily Gardner wants to reach out to a more diverse part of the population to ask them where they think boulevards should go in N/NE Portland.

She plans to go out into the neighborhoods to engage non-cyclists and ethnic communities. She wants to talk up cycling’s health benefits to the black community and has created two surveys; one for existing cyclists and one for people who don’t ride (yet).

SW Trails Group Pushes Ahead
Vaunted neighborhood activist Don Baack of SW Trails has been rallying the folks of the Hillsdale Neighborhood to get their ideas and recommendation for bike boulevards included in the current Bike Master Plan update.

Baack has put maps in the hands of residents so they can map their ideas for improvements and preferred routes to focus on. They are also planning a series of evaluation rides and hope to have open houses to discuss their proposed bike boulevards in March.

From all these updates, it’s clear that Portland is looking to be a leader in developing, safe, low-traffic streets. Stay tuned!

It’s also true that Portland may lose the funding for the 70s bike boulevard effort during the MTIP funding effort.

We need to encourage Commissioner Adams to fight for the 70s funding, and encourage Metro to make sure the project is funded.

Read the BTA Digest for details.

Foster! bah! I’m sure everyone here has gone the 205 path and tried to cross Division. that’s gotta be one of the worst roads to cross in that area. On more than one occasion did I have cars come to a screaching halt because they don’t think about the crossing at that intersection. What they need is a light like around 45th and Burnside.

Don Baack and the SW Trails group are also actively pushing for bicycle boulevards in Southwest, where safe, low-traffic routes are badly needed. They’re enlisting volunteers to propose and review possible routes. I hear there was an article on him in the In Portland section yesterday but some jerk stole my paper so I didn’t get to read it. See also yesterday’s BTA digest for a call to action on this front. Exciting!

oops! don’t I feel silly. forgot to add that SW Trails bit… thanks for keeping me on my toes Jessica. Will update the post now.

would be great to get a bike blvd designated for the connection at the “springwater gap” in Sellwood… maybe Linn? crossing 17th at rush hour without a light is difficult.

pdx rocket,
There is a new bike light just down the street from 45th and burnside by the way, I think it is like 43rd, or something.
I have used it, and it only took a moment for the light to change, even during rush hour.

Cow, there is a planned trail connection for the Springwater Gap that will complete the multi-use trail. In the meantime, Umatilla works really well. Isn’t there a light there across 17th?

Dabby,
That’s the one I was speaking of…I think they need that exact thing where the 205 path crosses Division. That intersection is “pure insanity”

Oh, I see I read your post wrong.
Sorry.
My bad.

There is a pedestrian crossing light at Umatilla & 17th, but it doesn’t change very quickly.

There is a planned trail segment, but it’s also cubject to the Feb 2007 funding decisions of Metro, and the crossing of SE 17th will be difficult. The crossing at Umatilla *does* have a light, but no activators within easy cyclist reach – you have to go over to the sidewalk and then tote your bike back into the traffic lane. The “missing link” segment depends on the city successfully negotiating for the ROW from Dick Samuels, owner of the Oregon Pacific Railroad. (Mr. Samuels wants to do a land swap with a parcel next to Oaks park, so he can help the ORHS build a railroad museum for the city’s 3 steam locomotives) It also depends on how they’re going to cross 17th. With a trail along the rail ROW, it would cross 17th at the intersection with Ochoco Road, and that intersection is not only busy but built on a kind of blind curve. Cars take it quite fast, and frequently back up through the intersection whenever NB traffic turns left onto Linn. Not insurmountable (closing off half of Linn and making that connection with 17th one-way would help), but probably expensive.