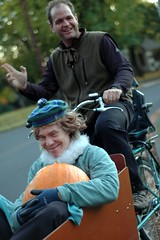 I have just confirmed that the Dutch Bicycle Company — a Florida-based importer of bakfiets and Dutch city bikes — has named a Portland distributor.

On a side note, I can’t help but notice that Clever Cycles is similar to Cleverchimp, the local business of Todd Fahrner and his Stokemonkey electric assist product.

Todd and Dean recently collaborated on an Stokemonkey-equipped bakfiets and I have a feeling that we’ll be hearing more out of their partnership soon.

This announcement follows a steady stream of Dutch bicycle news and further validates my hunch that 2007 will bring a Dutch bike invasion to the U.S. Consider the following recent developments:

All this recent news, together with the recent shift in American politics towards more progressive thinking about livability and transportation issues, sets the stage in making 2007 a banner year for bikes in this country. Stay tuned and hold on…

I can’t wait to buy one! Now I just need to start saving up, since they cost as much as a small car…but it’ll be worth it.

Now who’s going to underwrite my theft, PIP & UM/UIM insurance on this puppy?

So, will Dean have a selection of these bikes on hand for test rides? That would be a good way to convince folks that the 3- and 7-speed hubs are sufficient to drive the heavier frames up Portland hills even with the more upright riding stance.

Jessica – the Kryptonite New York lock I use with my Bakfiets has $3000 anti-theft protection. I hope they’re good for it if it ever comes to that… Can’t help you with the PIP/UM/UIM 😉

Ian – my Cargobike has an 8 speed Nexus hub which is pretty decent for most purposes in NE/SE/downtown. I find that I’m not spending much time below 3rd gear on hills like Alameda ridge or east of the Broadway bridge. Haven’t ridden to the zoo or OHSU yet, so I can’t speak to bigger hills. Rarely if ever do I “spin-out” in 8th gear. The upright riding position is actually not as bad as I thought it would be power-wise, though it clearly uses different butt muscles than the road bike judging from soreness I’ve recently experienced after longer rides. I’d ultimately like to convert to a Rohloff 14 speed hub to extend the upper and lower ranges over the Nexus once bank account recovers from the initial blow, but the Nexus is really quite civilized – very quiet & easy-shifting – and is growing on me the more I use it.

Wow. Even got Dan to place an ad on your site, eh Jonathan? Good for you! Dan, I’m pleased to see that you were able to work out a deal with someone to be a representative for you here in Portland. I still want my own Bakfiets, but I’ll have to wait a while at this point.