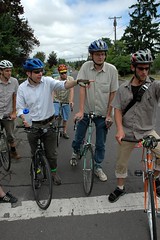 The Bicycle Transportation Alliance is in the midst of a two-year bicycle boulevard campaign. They’re trying to figure out where to put them, how to educate other advocates about them and most importantly, they’re trying to come up with a clear vision for what these boulevards will actually look like.

To that end, they’re on a bike boulevard tour that has already taken them to Davis and Berkeley California in recent weeks and they have future trips planned to Vancouver, BC among other places.

On Monday I joined the BTA Bike Boulevard Team on a trip to Eugene to see what planners in that city are doing to create low-traffic bikeways. 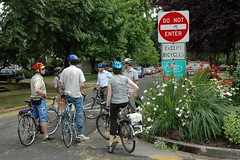 We met with two Eugene transportation planners, David Roth and Rob Inerfeld. The day consisted of a ride in and around Eugene to check out various street treatments. We would stop along the way so the BTA Team and our guides could discuss facilities and compare notes about what works and what doesn’t. 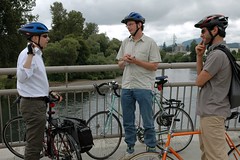 [On the DeFazio bike bridge.]

When designing bike boulevards it seems like the most important element is how to cross high-traffic arterial streets. In addition to safety concerns, there is usually much more politics to consider when faced with hampering high volumes of car traffic.

A preferred way to deal with arterials – in addition to curb extensions – is to construct a center median refuge for cyclists and pedestrians.

Another important design consideration for a successful bike boulevard is keeping stop signs to a minimum. I wasn’t surprised to hear the BTA folks comment that in over-regulated California, there seemed to be a stop sign on every street. However in Eugene, this wasn’t the case. We pedaled down several streets with a minimum of stops. 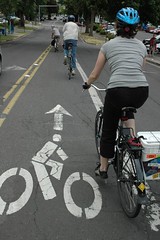 [Bike lane in the
middle of the street.] 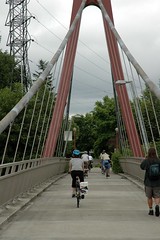 Eugene has some gorgeous bikeways and they have done a great job with their riverfront paths. Another thing they have done well is to incorporate transportation routes through their greenspaces and parks.

This idea of integrating bicycle transportation routes into parks is a foreign concept here in Portland. Scott Bricker, the BTA’s policy director is hoping to change that and he wants to work with the Parks Department on this more closely in the future.

Towards the end of our ride we couldn’t resist a cruise out onto the nicest bike and pedestrian bridge I’ve ever seen; the Peter DeFazio Bridge. Named after Eugene’s bike-loving congressman (here’s a photo of his office in DC), this bridge has it all. It is centrally located, it looks great and it is nicely integrated into the bikeway network.

After our ride, we had a quick lunch before driving back to Portland.

It was neat to spend a day in the shoes of the BTA and see them in action, solidifying regional partnerships and sharing knowledge with other cities.

This bicycle boulevard tour is just one piece of work by local advocates and City planners that will have a major impact on the look and feel of riding a bike in Portland in the next 5-10 years.