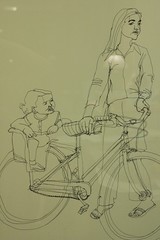 Yesterday I stopped by City Hall to check in on preparations for tonight’s Made in Portland Bike Show and Art Exhibition.

I hope you can join us (it’s from 5-8PM) because we’ve put together an unprecedented gathering of bicycle-inspired art. Here are a few teasers. 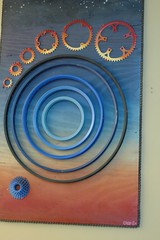 And don’t forget, we’ll also have:

It’s all happening tonight from 5-8PM at 1221 SW Fourth Street in downtown Portland…see you there!

City Hall Art Show is 5 – 7 pm, per Commissioner Adams’ invite. But I’m sure folks will hang out for the bike love. I’d advise getting there early if you want some refreshments tho – you know how hungry/thirsty you get looking at art.
Dat alerts us that the Tour de France will be playing in one section of the atrium, so you can drink locally but geek globally.