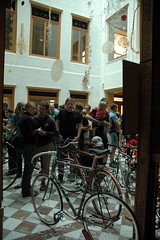 Hundreds of cyclists packed City Hall last night to bask in Portland’s rich artisan bicycle culture at the first-ever Made in Portland Bicycle Show and Art Exhibition. The crowds were thick and the energy and good times flowed like the free Widmer beer.

The bike show was the epicenter of the event. The marble floors, columns and high ceilings of the atrium were the perfect setting for the builders to share their craft. There was a wide variety of locally made bikes on display, from the utilitarian three-wheeled vehicles of Bill Stites to the woman-centric Sweetpea cross bike and Sacha White’s show-stopping Vanilla Tricycle. 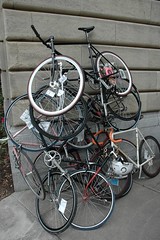 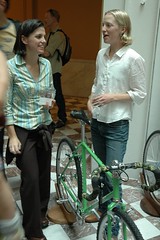 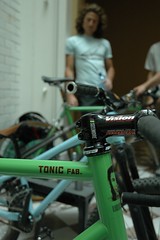 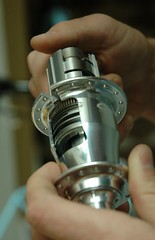 It was pretty special to have so many talented builders all in the same room. I noticed Chris King and Ira Ryan chatting it up and Sacha White got downright silly with his former apprentice and now builder of his own bikes, Ira Ryan.

I also finally got to meet JoJo Paquini. As a former band member he has lived in many places but said,

“I don’t think I could do what I do in any other town.”

Several people expressed to me that a show like this couldn’t have happened anywhere else. It’s true. Besides the vast amount of local bike-building talent on display, it was just as amazing to witness the way City Hall welcomed the bike community with such open arms.

Commissioner Adams left his office door wide open and welcomed everyone to hang out on his couches. Check out Zoobomber Handsome Dave, clowning around in Sam’s director chair.

It was great to see so many people from the community having a relaxed, fun time in the hallowed hall’s of City government.

I bumped into Tom Miller, (Adams’ Chief of Staff) and he looked stunned at the huge turnout. He said:

“Of all the First Thursday’s we’ve held here at City Hall, this one looks the most like Portland to me.”

I think the show left a lasting impression on Adams’ staff and made this exciting segment of Portland’s bicycle industry much more real to them.

But it wasn’t all just about the bikes, there was also a ton of great bike art to take in. If you missed it, you can still view the art all month in the Commissioner’s offices.

One of the highlights of the night for me was seeing the piles of bikes parked out in front of City Hall. We really did take over the place! I was also thrilled when, at the peak of the night, KATU-TV showed up and ran a live report on the 5 O’clock news. 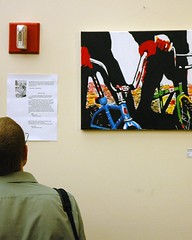 I want to thank Polly Birge and Sam Adams and everyone who showed up for making it such a memorable night. I hope you enjoyed it as much as I did.

For more photos, check out the full gallery.

Jonathan – what an incredible event! Thanks so much for all your hard work on this.

it was great to finally get to meet you Johnathan. you put on a wonderful event.

i’m glad you were back from “vacation” so you could cover this event. 🙂

it always tickles me pink to see so many people turn out for these events. who knew art in city hall could be so much fun?

The turnout was amazing. Nice to meet you Jonathan. While I have some serious respect for the craftsmanship of the pro framebuilders, I still think the bike show was in front of City Hall.

IRA RYAN is the new Vanilla.

yes, I had many a “I love Portland” moment last night… was it the art in everyone’s offices? Drinking free beer in City Hall while perusing an 1897 bike map on someone’s wall? Which did I like ogling more, all the beautiful handbuilt bikes in the rotunda, or everyone’s magnificent steeds parked outside? Anyway, it was great fun, and thanks for putting it together, Jonathan!

And taisau has an amazing set of photos.

Thanks, Jonathan! It was a great event. It was really inspiring to see other bike artists and see those sexy bike frames…

great show, I just wish it wouldn’t have shut down at 7 instead of 8. i didn’t get to see any art work becuase they locked the office doors at 7.