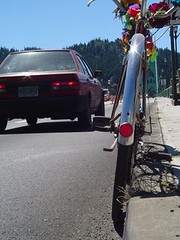 Noticed an article in the Oregonian yesterday about the upcoming 75th anniversary of the St. Johns Bridge in North Portland.

Given the controversial recent history of this bridge, one paragraph jumped out at me:

“In 2005, the Oregon Department of Transportation spent nearly $43 million to complete a major overhaul of the bridge that included new decking, replacement of worn cables, an upgrading of seismic features, better pedestrian and bicycle access, and reinstallation of historic street lamps.”

“Better pedestrian and bicycle access”? Hmm. Unless bikes and peds used to be prohibited altogether I fail to see how four motor vehicle lanes that have no shoulder (or bike lane) and come just inches away from a narrow sidewalk could ever be referred to as “better.” 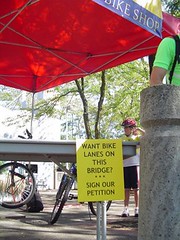 [The BTA tried to stop them.]

Sure it’s a nice looking bridge, unfortunately it’s just too dangerous for most cyclists to use and too spooky for many pedestrians (ever had a freight truck buzz by you at 45 mph?).

I hope ODOT doesn’t think we have forgotten about their transgressions. Bike advocates (both citizen and professional) are busy, active people and I’m afraid some of us have moved on to other important things.

In the midst of Pedalpalooza and our big Bike Summit, we can’t forget that ODOT managed to completely ignore bicycle safety on this bridge…right under our Platinum-tinged noses. 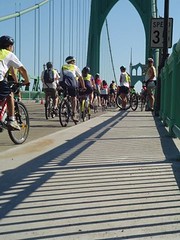 I heard ODOT might consider “sharrow” lane markings on the bridge and I know the BTA has bugged them about keeping the sidewalk clear of debris. But what else? Is anyone reminding ODOT that we are not satisfied with their decision?

How can we hold ODOT accountable, get some safety improvements made, and make sure something like this never happens again?

With a rapid influx of new residents in St. Johns, a bike-friendly head of their Neighborhood Association (Joe Adamski), and a 75th anniversary event on the horizon, perhaps now is a good time to make something happen.

Or, we could just do another naked ride across the bridge and hope for the best.

UPDATE: According to a reliable source, the guy at ODOT who inherited the St. Johns Bridge mess is a nice guy who has in the past expressed interest in sharrows. Here’s his contact info:

Please consider sending him your feedback and concern for bicycle safety on the bridge. Perhaps if he can demonstrate enough community interest and support for sharrows he will be able to move the conversation forward at ODOT.

Hmmm, funny you mention this. Just this week I was thinking after all the positive response to the WNBR Ride*S* with many people saying they can’t wait to do it again, the one year anniversary of the Nekkid St Johns ride is coming up.

Yes, I think it a perfect opportunity to remind ODOT we have not forgotten and we are not going away.

I recently rode across this wonderful, wonderful bridge for the first time on my way to Sauvie Island. Thankfully, being in a large group made it safe to take the lane, but I would feel very, very unsafe biking across the roadway of this bridge under any other circumstances.

Like many other folks, I was saddened at ODOT’s decision not to include bikelanes during their bridge overhaul recently.

Does anybody have the pertinent contact info for the relevant ODOT person, to enable us to email them, demanding a push for sharrows on this bridge, at the very least?

I used to use the St. Johns’s as my commuting route and did inquire about bike use on the bridge and the roads to the bridge and was told to “use the sidewalk”…nevermind the fact that the sidewalk of the road from Hwy 30 westbound to the west end of the bridge has power/telephones planted almost in the middle of it and apparently these didn’t require moving. If you’ve got wide bars beware…and I wonder how someone in wheelchair would use this sidewalk?

Here is the best person to contact at ODOT:

According to a very credible source he “has expressed interest in the past in painting sharrows on the bridge.”

your question about wheelchair use makes me wonder about the overall access to St Johns bridge for disabled folks. Is there any? If not is this a violation of the law? Anone know?

I don’t know if the ST. John’s bridge is wheelchair accessible, but it’s not a violation of the law if the bridge was built prior to law taking effect. Hope that answers part of your question.

I heard that the renovation was illegal due to the fact that bike lanes were not included. Many people suggested that a lawsuit should be filed against ODOT. Does anyone remember the details of that?

Also, I thought the Bicycle Bill mandated that 1% goes to bike/ped infrastructure.

Does that bill apply to renovations or just new developments?

I hope someone from ODOT, the BTA or PDOT can shed some light on this situation for us.

I grew up on Sauvie Island and have ridden a bike across the bridge dozens of times. My handlebars are 27″ wide and I have never had the slightest possible hint of feeling unsafe or that my rights were being violated as I rode across on the sidewalk. Very rarely are there ever any pedestrians on the sidewalk. I have no problem coming to a stop and breifly yeilding to them when required.

Unless cars and trucks are made narrower, it’s not likely the lanes will shrink to allow a bike lane.

Somebody has far too much free time if they are complaining about something so trivial. I’ll bet most don’t even live on the NW side and are required to commute across for work, etc.

Just go out and ride your bikes. You might even see me, I’ll be the guy with a big smile on his face.

If your not having fun, then what are you having?

I have to agree with Tim. The sidewalk is not that bad. I’ve crossed the St. John’s bridge many many times over the years. Coming from German Town or Forest Park on my way home to NE PDX or going over the bridge on my way out to Sauvies & back.

I do however think it is a shame that ODOT ignored cyclists concerns when redoing the bridge though.

My understanding is that the law requires bike lanes to be installed any time a new road is constructed or an existing road is reconstructed. The question is how much work constitutes a reconstruction? ODOT apparently successfully argued that complete replacement of the St. Johns Bridge deck was not a ‘reconstruction’ (although this has not been tested in a court of law). I for one would disagree with ODOT on this.

Let me clarify…the sidewalk on the bridge itself is fine (if you’re OK with being encouraged to ride there), but I am specifically concerned with the side walk from Hwy.30 W-bound up to the west end of the bridge. As for too much time on my hands, I’ll just let that one slide.

I don’t like the sharrows idea. The Sharrows are fine on 18th where there aren’t big rigs. Those big rig guys won’t give a damn about Sharrows. This is an unfortunate issue. It is rare I see others crossing the bridge, so the side walk seems to work fine. I’d rather have those big rigs crossing ST. Johns than other bridges in town.

I did however contact this guy once when there was a ton of gravel, trash and even a broken plastic chair on the side walk. They seemed to get it resolved fairly quickly.

i’m in favor of another naked ride just because they’re fun. it doesn’t have to be a “protest” per se of the bridge not having bike lanes; since it doesn’t, and it seems that issue isn’t go away, it still seems important to raise visibility of bikers who use the bridge. a bunch of naked asses on bike ought to stick in many drivers’ minds for a while– i’m in!