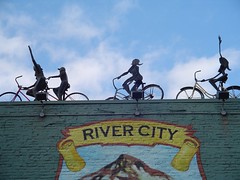 PepsiCo, the global corporation that owns brands like Doritos and Gatorade, has taken notice of an ad by iconic Portland bike shop, River City Bicycles. At issue is one of PepsiCo’s oldest and most valued brands, Quaker Oats.

PepsiCo’s trademark lawyer, Janet Silverberg has sent River City management a cease and desist letter regarding an ad by River City that spoofs a box of Quaker Oats. The ad, which is part of the shop’s “Commute by bike” series, ran in last weeks Willamette Week newspaper and PepsiCo claims it is in violation of their trademark.

No official comment yet from River City and I apologize for not having a graphic of the ad in question. I’ll post it once I can track it down.

Honestly, I think I might tend to agree with PepsiCo on this one. The ad depicts the Quaker Oats guy in a slimmer manner, supposedly because he bikes. Since this really isn’t poking fun or satirizing the marketing, River City is literally using the work as part of a marketing tool. I think they might be best to drop the adverts.

I am dumbfounded by this one. Yes it copies the “look and feel”, but it’s not like it’s confusing consumers, or luring them into buying some competitive product (EG “I bought this Waterford thinking it was a box of oatmeal).

I personally found the ad clever and appreciated that it had a fresh feel. It didn’t change my buying habits of Quaker Oats, but I think this cease and decist order will compel me to buy some other brand of oatmeal going forward.

My god, corporate lawyers can be such a pain in the ass!

Man, those guys are on the ball! And without a sense of humor, either.

To spoof or not to spoof?

Wow. Corporate lawyers are just all over p-town these days, aren’t they?

What I don’t understand is how River City’s ad hurts pepsico in any way really. They are always trying to associate Quaker Oats with health, this is doing the same and certainly not stealing their business. Maybe the Quakers need to sue pepsico for using a likeness without permission. Wouldn’t the image of a quaker be in the public domain? Perhaps not on a round can but what ever.

Pdxrocket is likely write in the legal sense, the point is that the law is absurd. I guess we can all argue until we are blue in the face but copyright law is very procorperate. Unless that changes pepsico, specialized and some many others will keep up the harassment. Branding has become so valuable that lawyers can’t allow people to have a bit of fun. I guess I would say I’m not going to buy from pepsioco any more but I don’t any way so it is a mostly empty threat.

Copyright, patent and trademark law was ment to encourage innovation by allowing individuals or groups to gain rewards for a fixed period from their innovations. Now it is being perverted to being used to prevent competition. Next up, Klennex suing for not mentioning their trade mark when I ask for a tissue! No wait, they figured out that diffusion of their brand into the cultual landscape is helpful in their marketing. Pepsico, are you listening, learn some lessons from others.

Penny wise, pound foolish, its too bad this sort of stupidity won’t run pepsico out of business.

I don’t have the energy to get fired up about this one. The Specialized-Mt.Cycle deal wore me out. This stuff is crazy sad…….

what, does pepsico own specialized. if this kind of stuff ticks them off, they should drop specialized for behaving as egregiously. their support of specialized doesnt go unnoticed to the jo-shmo (me) consumer. just my two cents

wow, this corporate stuff is tiring. I as well dont have the energy for this one. all I can say is that maybe this is karma coming back at River City for not dumping Specialized given how nasty theyve been through the years. down with antagonistic corporate America.