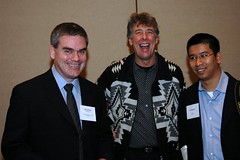 After more than 25 years with the Portland Police Bureau, Traffic Division Commander Bill Sinnott will move on to a new career.

Sinnott was a tremendous ally of the bike community. He was open and sincere about working with us to find solutions and ease the sometimes tense relationships between cyclists and cops. He regularly attended meetings with Critical Mass participants, and his work with the Critical Mass Working Group was recently recognized with an Alice Award nomination. He was also instrumental in the Bureau’s free bike light program, which was covered nationally by CBS Sunday Morning.

What I appreciated most about Bill was his willingness to meet and the time he took to respond to my questions and requests for information. Actually, he would often respond with intelligent questions of his own about various aspects of our bike culture. It was this interest and willingness to figure out what made bikers tick that made him such a great partner to bike advocates.

His presence will be missed and we can only hope that the next commander is as cool as Bill. Lieutenant Mark Kruger will become the acting commander until a new one is named.

Sinnott will step down on April 14th and will assume the role of managing the Downtown Clean and Safe program on April 17th.

Bummer. Listening to Bill on the KBOO Bike Show and reading about him here, it really seemed like he was actively reaching out to the bike community in a positive and constructive way. Considering the situation with Critical Mass in NYC, his work in Portland was just plain enlightened!

I agree with you Jonathan – I hope that his replacement is as open and active as he was.

We (at the BTA) just sent this letter to the Mayor and City Council:

The BTA is deeply supportive of the efforts of the Mayor, the City Council, and the Portland Police Bureau to enhance community policing in the Portland area, and to increase traffic safety through enhanced data collection, enforcement, and public education. The work being done by the Community and School Traffic Safety Partnership (CSTSP) is outstanding and groundbreaking, and has already shown direct benefits to public safety in Portland.

We at the BTA have been particularly impressed with progress that has been made under Commander Sinnott’s leadership. Commander Sinnott’s active participation in the CSTSP, his commitment to community dialogue, and his willingness to undertake new, sometimes untraditional, initiatives have resulted in safer streets for the growing number of Portlanders who ride a bike.

∑ Commander Sinnott helped initiate an innovative bike light giveaway program to address the problem of cyclists without lights in a way that solves the problem instead of punishing people unnecessarily, and makes good fiscal sense for the department.

∑ Commander Sinnott was an outstanding partner in launching the “Portland Shares the Road” campaign to show that Portlanders are united in their opposition to road rage.

∑ Upon hearing from bicyclists that drivers were encroaching into the bike lane, Commander Sinnott started a plainclothes officer enforcement program to ticket drivers who don’t yield to bicyclists in a bike lane.

∑ Commander Sinnott opened the bureau’s doors to the BTA’s volunteer Crash Response Team and spent an entire evening meeting with us about our concerns and to share how the Traffic Department works.

∑ Under Commander Sinnott’s leadership, the Portland Police Bureau had the highest level of participation of any organization in citywide Bicycle Safety Leadership Workshops.

∑ Relations between Critical Mass participants and the Portland Police Bureau are greatly improved thanks to Commander Sinnott’s support of and participation in the Critical Mass Working Group (which was recently nominated for one of the BTA’s Alice B. Toeclips awards for outstanding contributions to bicycling).

These examples and many more demonstrate Commander Sinnott’s commitment to community response and his ability to see the best and most positive solution for a problem. I’m writing to thank and commend him, and to ask you and the Council to appoint a worthy successor, one who shares his values and commitment.

Even as progress has been made in the last few years, far too many Portland residents still die in crashes on our roads. National and international research shows that the most effective way we can keep our citizens safe on the streets is by reducing speeding and red light running and reducing drunk driving. Additionally, we know that traffic safety (especially speeding in residential neighborhoods) is a top concern of Portlanders every year in the City Auditor’s community survey. The CSTSP needs a strong Traffic Division Commander to partner with us on these essential initiatives.