Very intersting post over on Sam Adam’s blog. It concerns the possibility of moving the Sauvie Island Bridge – which is slated for demolition once the new one is built – to Northwest Portland. They’re trying to decide if the span should be re-used to create a bicycle and pedestrian only bridge across the 405 freeway at NW Flanders Street. Someone even made this cool digital mock-up of how Flanders might look with the bridge in place. 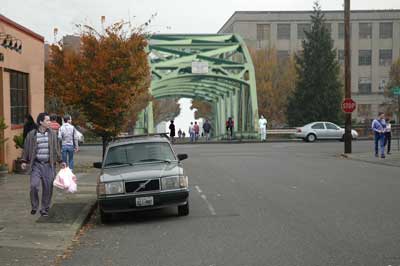 The decision of course comes down to money. Relocating the Sauvie Island Bridge would cost at least double the price of building a bridge from scratch.

But despite the cost, I think this possibility should be seriously considered. A “Bridge to the Pearl” fund-raising campaign would have a real chance to succeed given what this would mean to downtown Portland (and given the financial stature of some bike-loving Pearl residents).

I can already see the little pins and ribbons popping up all over the City! Save the bridge! Bring it to the Pearl!

I suggest reading Sam’s post for all the details.

Such an excellent idea on so many levels. It seems like a longshot that the engineering could work out though.

that gets my vote.

It will cost at least twice as much? Plus it’s old, plus it’s not designed for that span/use. I don’t see how it could work. Though I think a ped bridge there is a fine idea

The ped bridge is a great idea, although if saving the old one really cost that much more, why not build a new one. Oh, and then convert all of flanders into a ped friendly / car-free lane, sorta like 13th is now. I t would be great for the district and businesses if there was a cross of ped/bike only lanes through the pearl and into the nw….

What an awesome idea! We would go Platinum for sure!

Like I posted over at Sam Adam’s blog, I think this is a great idea, as long as it doesn’t conflict with the ultimate goal of capping I-405 from NW Glisan St to SW Naito parkway. Though, I can see it enduring as a quirky piece of urban public art/infrastructure, even after the rest of the capping job was complete — a reminder that, beneath the cap, a freeway lies, a river of traffic to be bridged by the more human-scale urban infrastructure above.

My rant….We taxpayers are spending $34 million on the new bridge at Sauvies Island because the old bridge won’t carry full sized trucks for the farmers. A dozen or more farmers will benefit. This is important. I agree.

However, I don’t agree with our current priorities. Bike and pedestrian improvements can benefit thousands of people. The costs for bike and pedestrian infrastructure, paths, bridges, walkways, are a fraction of the cost involved with truck and auto infrastructure. It seems to me that we get more out of our money when it is spent on getting cars and trucks off the road. Pedestrians, cyclist, motorist and truckers are to gain.

I think it’s sensible. Very good idea. I love it.

Talking about bridges did you guys see the new one, in construction, for the Springwater Trail, that thing has Platinum written all over… It looks very cool, I hope it will be rideable soon too, go check it out!
Ciao
Paolo

I don’t think moving the bridge to NW is a good idea because of the costs innvolved. That money could be better used for other ped./bike projects around the city. Yes, it would look pretty neat, but let’s be reasonable.

That being said, there is some precendent for re-using old bridges. In Bellingham, WA they are building a new building for their Saturday Market out of an old steel bridge from the Skagit river. Maybe they could re-use the steel from the Sauvie Island bridge in a way that is less expensive but still creative.

Why would the city spend twice as much if they didn\’t have to?

The pearl doesn\’t need anymore help. Go back to California.

\”Relocating the Sauvie Island Bridge would cost at least double the price of building a bridge from scratch.\” bikeportland/jonathan maus

Why would it cost at least double the price of building a bridge from scratch? Is the design of the bridge built from scratch really going to be worth the savings gained by not moving the old bridge?

I\’ve seen renderings of a design proposal for the Sellwood Bridge. I also hazily remember pictures of the replacement bridge for an old one in Astoria or something like that. I think the Sellwood has beautiful arches. In the design I saw, arches exist, but I felt emphasis was drawn away from importance of good graceful design for the setting.

The coastal replacement bridge got good reviews, but personally, I\’m still not convinced it was a worthy successor to the older bridge on the issue of aesthetics.

These newer, cheaper, or rather….cost effective designs seem to have a tendency to be less beautiful, or not so beautiful at all compared to the old stuff. That can sometimes make spending double the money of a new scratch built bridge to re-use a good old design, worthwhile. So I wonder if this rationale speaks strongly enough for the Sauvie Island bridge.