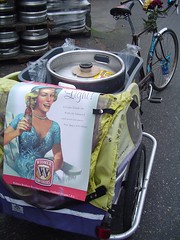 Thought I’d share the link to one of my most popular posts ever (currently ranked 5th out of 674). It’s a little report with photos of when Sara Stout and I each moved a full keg of beer (180lbs!) from Widmer Brewing in North Portland to the Clinton Street Theater in Southeast.

As a side note, I made a postcard out of one of the images and recently sent it to Rob Widmer. Turns out he’s a devoted bike commuter and he replied by saying, “if you ever want to talk bikes and beer, just let me know.” Cool.

I wonder: If you tap the keg before unhitching the trailer, would that be a violation of Oregon’s “open container” law?

I think you’re exceeding the recommended weight limit for the Burley!

Nothing wrong with exceeding the weight here and there. I’ve been known to exceed a Burley’s weight by 40 lbs (a 100 pounder hauling 140 lbs of newsletters) for 4 miles with no problem. Yeah, I wouldn’t recommend it on a regular basis.

Do we assume that “Stout” has switched to Ale? Cool photo!