If marketing campaigns and PSAs don’t curb distracted driving and we lack the resources to enforce laws, how will we ever learn that driving a multi-ton vehicle on a road shared with people walking and biking is an extremely serious responsibility?

As we struggle to figure out why an “alarming” amount of people are being killed while walking on our roads here in Oregon, and we mourn the death of a 23 month old who was hit while crossing a North Portland street yesterday (was being pushed in a stroller), I want to share the concept of “strict liability” that is current practice in the Netherlands.

Local racer and digital media pro Burk Webb is creating quite a following with his cyclocross videos. He has been sharing his work via the OBRA email list each week with the subject line of “(Race name) in convenient video form.” 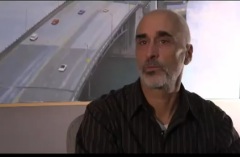 The 10-minute segment (watch it below) is a good primer on the current state of Portland’s bike network. It’s also a window into where Portland is heading in the future and how the city plans to reach their goal of 25% bike mode share by 2030.

Getting to school.
– Watch the video below –

Several readers have shared an extremely inspiring video from Orlando that everyone should watch and share. It chronicles a student-run bike-to-school effort at Colonial High School in Central Florida that you just have to see to believe.

No lights, no problem.
Still from video, watch it below.

Gridlock and road rage are an unfortunate part of American traffic culture. How much do traffic lights have to do with that? Would we be more considerate of other road users without them? A small town in England decided to find out.

About a year ago, the small coastal town of Portishead, England embarked on an experiment. In order to relieve congestion that was choking their downtown with long delays, traffic engineers decided to turn off the traffic signals. Not surprisingly, there was negative outcry from citizens about the idea; but the results of the experiment, captured in the video below, were surprising.

It’s a rare media outlet that can cover something like the World Naked Bike Ride with a good balance of professionalism and good-natured fun, but the crew at G4 TV seems to have done just that.

Here’s the video (possibly NSFW, depending on where you work):

A new Streetfilm (watch it below) taken during the recent Velo-City Global conference in Copenhagen is like a refuge in a storm.

Here in Portland (and across the country), we still struggle with resentment over bike lanes, a local media that’s happy to stir it up, people wanting to ban bikes completely because they’re simply in the way, people on bikes who can’t be bothered to slow down for other bike traffic, and public transit employees whose actions and words make our streets less safe for people on bikes.

Still from ‘Get Dirty’ by
Robin Moore Productions.

Portland-based filmmaker Robin Moore has done it again. The man behind the phenomenal web video sensation, “Performance,” which parodied fixed gear and roadie culture, has released “Get Dirty,” which does the same to mountain bikers.

Moore’s latest is equally entertaining. Listen to the lyrics…they’re hilarious! Check it out below… 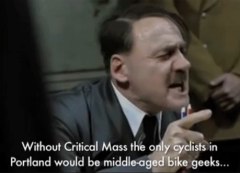 Watch Hitler expound on
Portland’s bike scene in
the video below.
(Still from the movie Downfall)

Portland filmmaker Joe Biel has collaborated with veteran local bike scene participant Allan Folz on Mien Fiets, a short video that attempts to explain what has happened to bike activism in Portland since the demise of Critical Mass (a ride that once rallied locals in the hundreds, now barely even exists).

Mein Fiets, a crowd favorite at Filmed by Bike where it debuted back in April, was made by using a creative translation of the oft-parodied bunker scene from the 2004 film Downfall about the last 10 days of Adolf Hitler.

A new video (watch it below) created by David Osborn from the Stop the CRC Coalition in collaboration with Coalition for Livable Future says that it’s time to “push back” on the Columbia River Crossing project.

The video tells their version of the recent history of the project. It features a July 2008 Portland City Council exchange between Oregon Department of Transporation (ODOT) Director Matt Garrett and Portland Mayor Sam Adams where Garrett promises that the DOTs would not move forward without consensus.

Raitt, going for the stage win on the
final ascent through Riverview Cemetery.
– Watch video below –

Portlander Merritt Raitt’s dreamy commute takes him from his home in Ladd’s Addition, along the Willamette River via the Springwater Corridor Trail, and then over the river and up the hills to Oregon Health Sciences University. It’s such a nice ride that Raitt decided to make a movie about it.

But Raitt didn’t make just any movie, he painstakingly edited a play-by-play of his commute that mimics a stage of the Tour de France — complete with narration by legendary announcers Phil Liggett and Paul Sherwen.