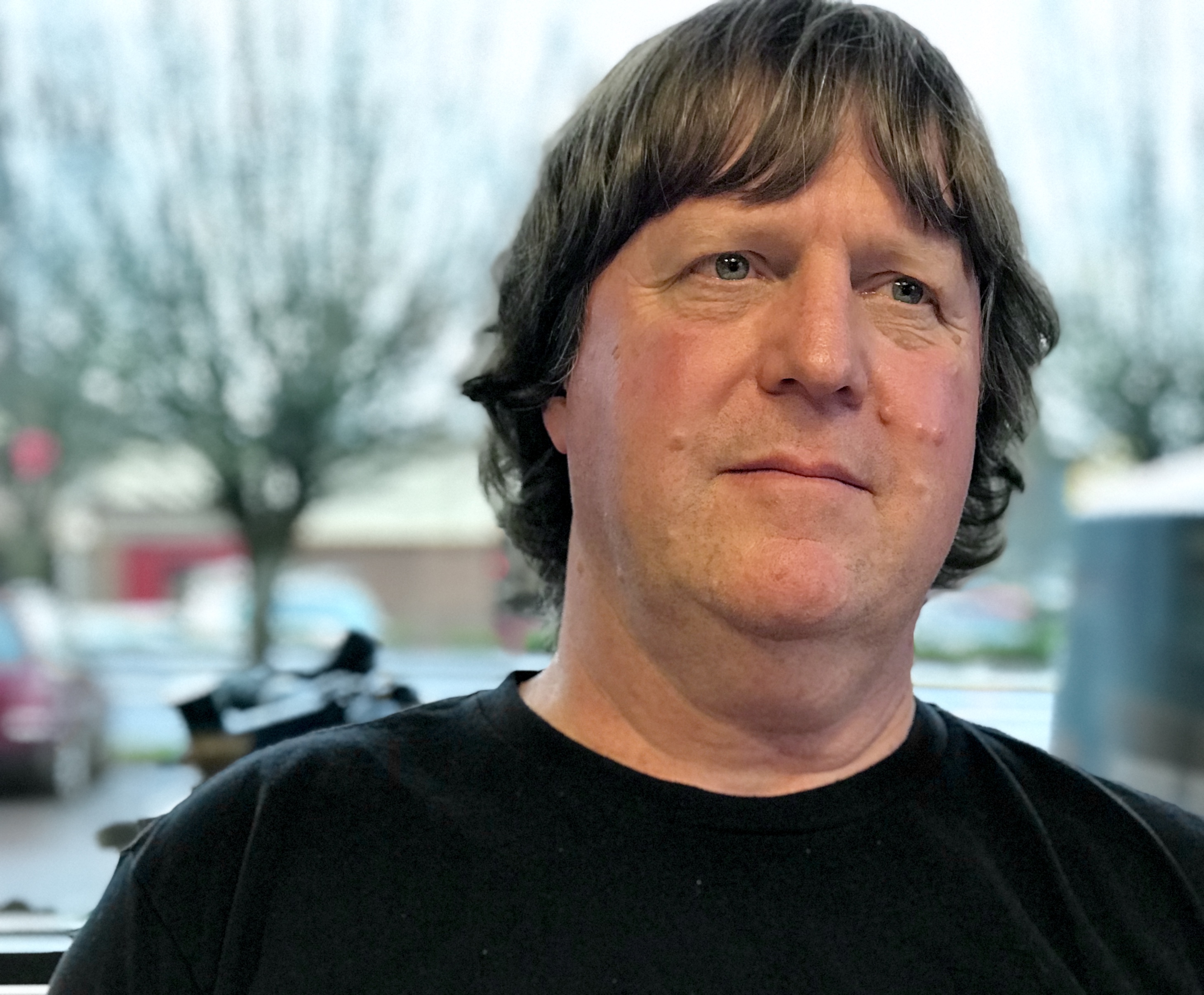 In the early morning hours of August 21st, 2017, Paul Thompson was on his usual route picking up recycled cardboard from businesses in Portland’s central eastside industrial district. A truck driver for over three decades, Thompson had a spotless record before that morning.

After a stop to empty the bins at All Service Moving on Southeast Morrison, he drove south on Water Avenue. Then he turned left onto Taylor and his life changed forever. 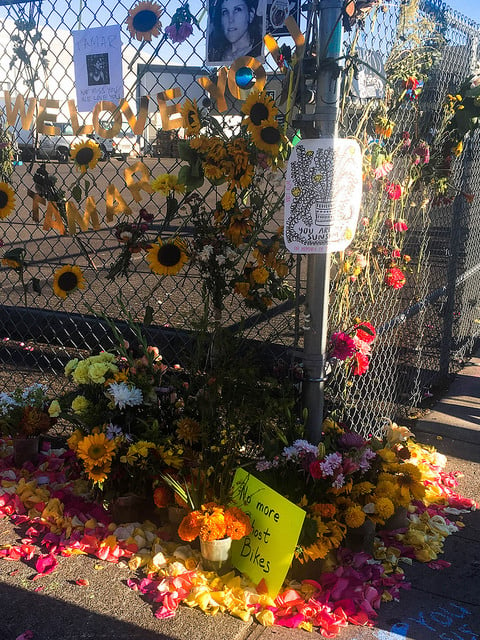 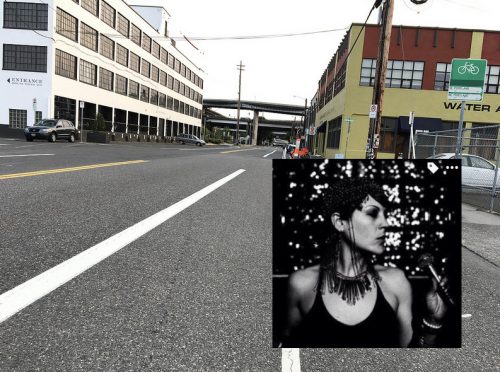 The man driving the garbage truck that was involved in the collision that killed Tamar Monhait on August 21st has been issued two traffic citations.

The Portland Police Bureau has cited Paul Thompson for a Dangerous Left Turn and Failure to Signal a Turn. The former is a Class C traffic violation that comes with a presumptive fine of $260 and the latter is a Class D violation that has a presumptive fine of $110. If Thompson challenges the citations in court the fines could be dropped to $130 and $60 respectively.

After a fatal collision, it’s standard procedure for the PPB to defer any citation decisions until after the District Attorney completes their investigation. On October 26th the Multnomah County DA declined to pursue criminal charges against Thompson. The DA found no evidence that Thompson engaged in the behaviors required to reach the legal threshold to prove a criminal recklessness or negligence. 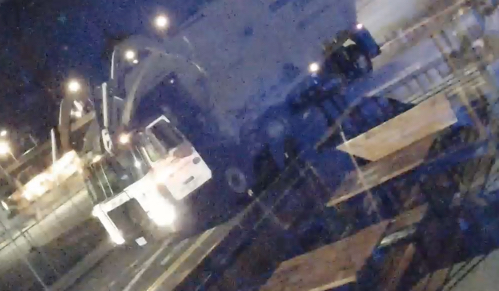 The Multnomah County District Attorney’s office will not pursue criminal charges against the man who was driving the garbage truck that ran over and killed Tamar Monhait on August 21st.

Deputy District Attorney Nicole Jergovic, in a memo released on Thursday (PDF), wrote that, “After a complete and very thorough investigation by the Portland Police Bureau’s Major Crash Team, it is apparent that Tamar Monhait’s death was an accident and the facts do not support a criminal homicide.”

This decision was reached despite the fact that a PPB investigator concluded Monhait had the legal right-of-way and that the garbage truck operator, Paul Thompson, did not use his turn signal (contrary to what he told PPB officers at the scene), admitted to trying to beat an oncoming train, cut the left turn sharply, and was described by a witness as taking the left turn “fast”.

In order to pursue charges, the DA would have to convince a jury beyond a reasonable doubt that Thompson’s actions were willfully negligent and reckless. 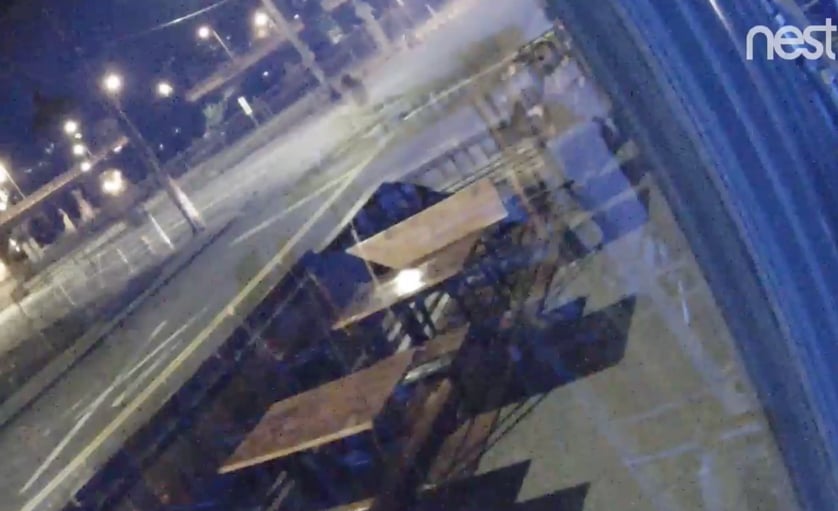 As reported last month by The Oregonian, Tamar Monhait’s family has filed a lawsuit with the company responsible for the garbage truck operator who hit and killed her.

In the early morning hours of August 21st, 41-year-old Monhait was biking north on Southeast Water Avenue at Taylor when the truck operator made a left turn in front of her. She died at the scene from the impact.

Monhait’s lawyers allege that the left turn by the garbage truck driver is the result of improper training by his employer, Republic Services Alliance Group. They’re asking for up to $10 million in damages.

The suit claims that the intersection is well lit and that Monhait was “lawfully riding her bicycle… in a designated bike lane.” 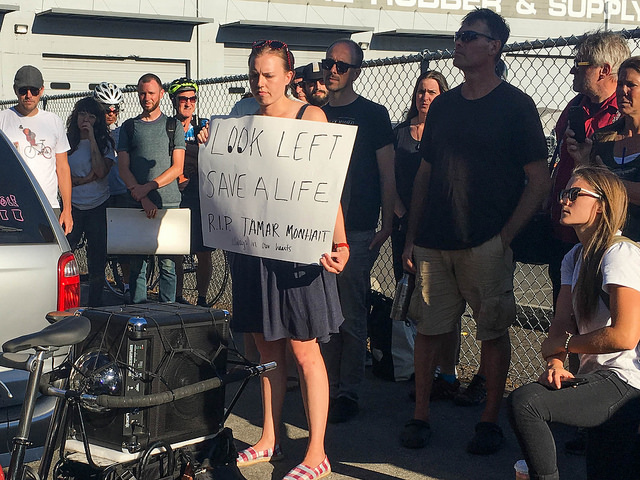 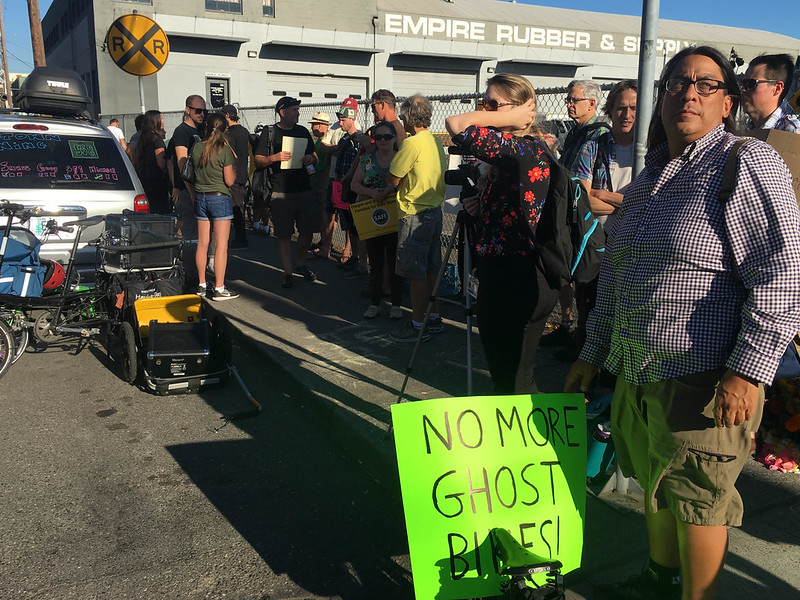 Mourners gathered at the cramped intersection where Tamar Monhait’s life was cut short.
(Photos by Pat Rafferty for BikePortland)

Dozens gathered on the cramped corner of SE Taylor Street and Water Avenue to mourn the loss of Tamar Monhait on Friday evening.

Vans full of Hood-to-Coast runners breezed through the intersection throughout the vigil, which only further hammered home the recurring theme of the evening: infrastructure pushed past its limits in a growing city. 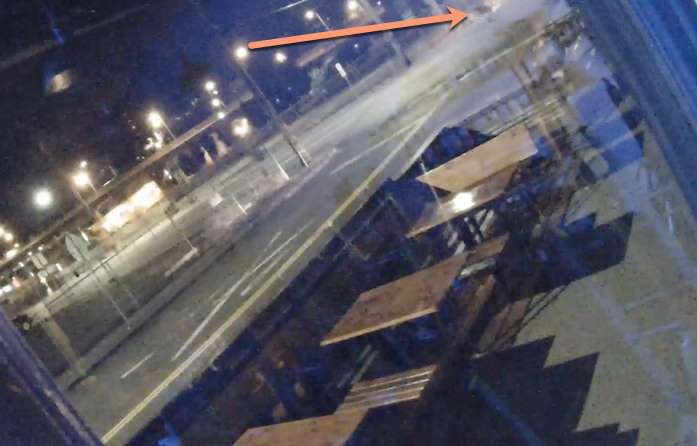 The Portland Police Bureau are now have clear video evidence of the collision that resulted in the death of Tamar Monhait early Monday morning.

A camera facing southwest from Water Avenue Coffee caught the tragic incident and owner Matt Milletto has forwarded the video to the PPB investigator working on the case.

I watched the video today. I’m not going to share it out of respect for how it might impact people’s emotions; but I will attempt to explain what I saw. 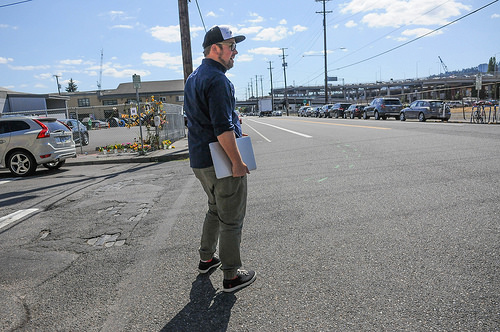 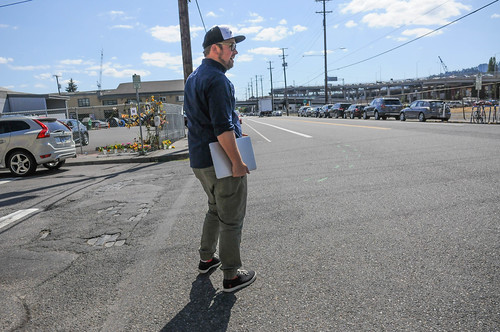 Matt Milletto of Water Avenue Coffee, standing in the intersection where Tamar Monhait was hit Monday morning, is tired of the dangerous driving in his neighborhood.
(Photos: J. Maus/BikePortland)

Matt Milletto, the owner of Water Avenue Coffee, has seen enough. The death of 41-year-old Tamar Monhait just steps away from his front door has spurred him into action.

During the monthly meeting of the Central Eastside Industrial Council last night, Milletto stepped forward during the public comment period to share his concerns about the intersection of Water Avenue and Taylor. I wasn’t there but heard from a source in the room that he spoke forcefully about the need for something to be done. I met Milletto today to hear his perspective first-hand. 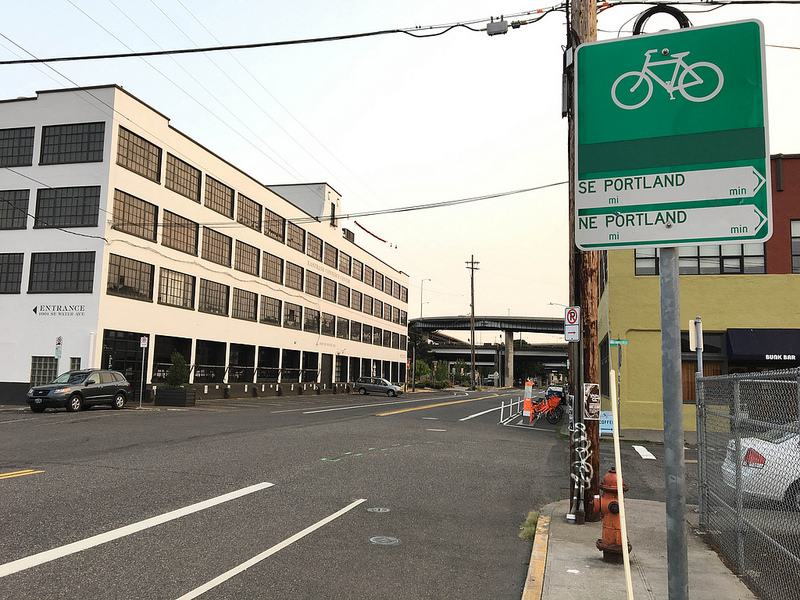 I went to Southeast Water and Taylor this morning to get a better sense of the intersection and have reached out to those who knew her.

The collision happened just a few feet from a bike corral, a Biketown station, and the street seats of Water Avenue Coffee Company. During the day this intersection is bustling with a mix of industrial truck traffic, walkers and bikers headed to and from the Eastbank Esplanade, patrons of the many popular cafes and bars in the area, and professionals headed to any one of the newly sprouted office buildings that are transforming the central eastside.

Little is known about precisely what happened, but from initial statements by the Portland Police Bureau, we know that Monhait was riding northbound on Water Avenue prior to the collision. She was probably in the freshly-painted bike lane as she approached the intersection with Taylor. It’s a standard, 5-foot wide, unprotected bike lane with no buffer and the striping ends before the intersection. There’s an auto parking lane to the right of the bike lane and a vehicle lane to the left. This is a major city bike route as evidenced by the bikeway signage telling riders to turn east on Taylor to reach northeast and southeast Portland. 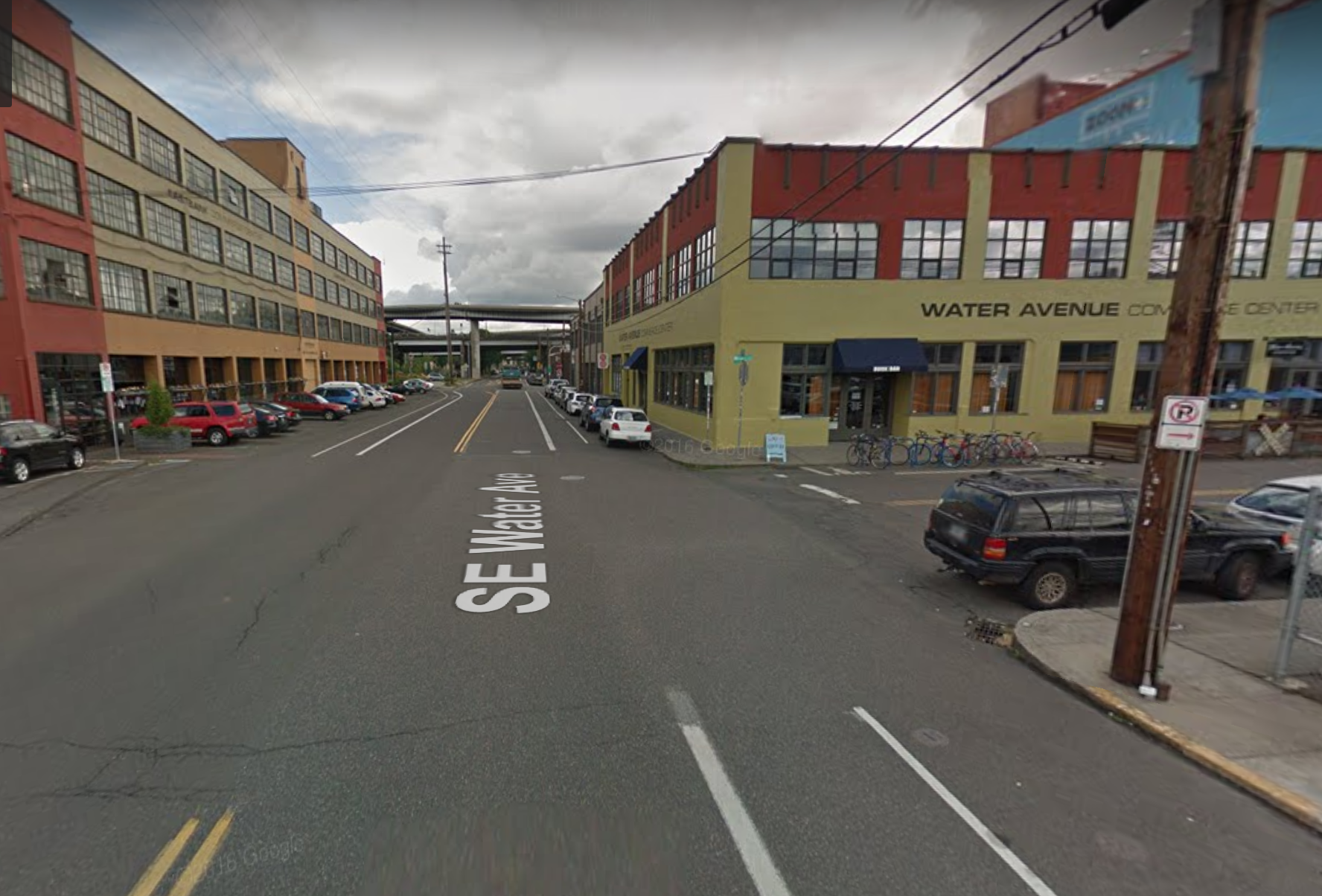 UPDATE, 4:25 pm: Police have identified the bicycle rider as Tamar Monhait, a resident of Portland. They have also just added this to their original statement: “The Portland Police Bureau’s Traffic Division wishes to remind all bicyclists to wear an approved bicycle helmet. Additionally, bicyclists should operate with a front-facing white light and a rear-facing red light while operating a bicycle in low-light or dark conditions.”
—

A 41-year-old woman died early this morning while riding her bike in the central eastside.