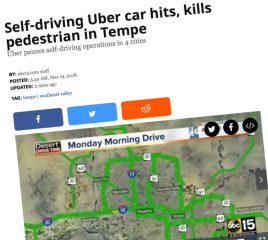 Scary news out of Tempe.

Uber has been testing its new self-driving cars on human subjects since last year and now it appears one of them has killed a person who was walking across a street. The collision happened in Tempe, Arizona late last night. According to a local news report, “Tempe Police says the vehicle was in autonomous mode at the time of the crash and a vehicle operator was also behind the wheel.”

This is the second self-driving Uber (that we know about) that has been involved in a collision. Last month a local news station in Pittsburgh reported that one of them slammed into another car while in self-driving mode.

After last night’s death, Uber has announced it will immediately end its testing in Tempe and Pittsburgh, as well as San Francisco and Toronto.

Thankfully in Portland our local leaders and transportation officials have not allowed a private company to test their deadly product on humans.
END_OF_DOCUMENT_TOKEN_TO_BE_REPLACED

Could driving get catastrophically cheap? One smart Portlander speculates 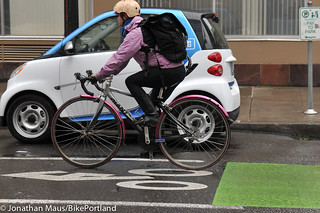 Here’s an interesting argument about the near future from a Portland entrepreneur who’s also been a longtime advocate for biking and mass transit.

It’s a useful counterpoint to yesterday’s news that the U.S. Department of Transportation will kick off a $4 billion program to write national rules for self-driving cars.

The futurism here comes from Steve Gutmann, a Southeast Portland resident who has worked at various transportation-related startups since becoming an early employee at the local company that later merged with Zipcar. He’s also on the board of the anti-sprawl group 1000 Friends of Oregon.

END_OF_DOCUMENT_TOKEN_TO_BE_REPLACED 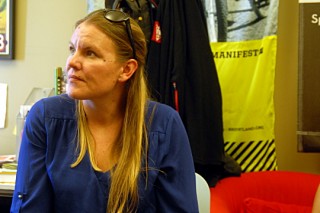 Portland is now one of just two major U.S. cities where you can’t hail a ride with either Uber or Lyft — and that’s something the car-summoning companies would, of course, love to change.

The services essentially let anyone who passes their background checks become a paid cab driver using a personal car. But Uber has balked at expanding illegally into Portland, where you can be thrown in jail for six months for operating an unlicensed taxi.

We’ve been watching these trends closely because services like Uber are already having a huge impact on low-car life in other cities. Last week, I met a young Chicagoan who gets around by bicycle in nice weather but said she’s spent $2,000 on Uber this year for foul-weather commuting and late-night rides home; two years ago, she probably would have bought her own car by now and started using it for most trips.

END_OF_DOCUMENT_TOKEN_TO_BE_REPLACED

Comment of the Week: How self-driving cars are actually going to work 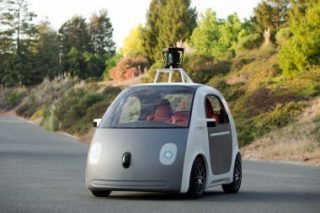 Two big issues, gender in the bike world and the nature of Portland bike activism, generated lots of excellent perspectives from readers on the site this week. This one about the “thousand cuts” of being a woman was one of our most upvoted ever; this one early this morning about the recent history of Portland-centric bicycle advocacy groups is very persuasive.

But let’s finish the week on a lighter note, thanks to reader Jake.

END_OF_DOCUMENT_TOKEN_TO_BE_REPLACED 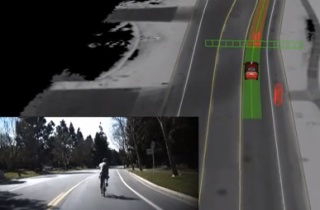 Scree grab from new Google video showing
how their self-driving car can avoid a
bicycle rider.

Google released an update on their self-driving car project today that put a special emphasis on the cars’ ability to detect and maneuver around bicycle riders.

While driverless cars have had widely publicized success in their ability to navigate open roads and freeways, dealing with urban traffic is a whole different ballgame. In today’s update, posted on their official blog, Google says they’re well on their way to “mastering city street driving.”

Jaywalking pedestrians. Cars lurching out of hidden driveways. Double-parked delivery trucks blocking your lane and your view. At a busy time of day, a typical city street can leave even experienced drivers sweaty-palmed and irritable…