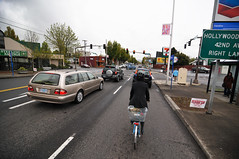 To make the bike/car interactions a bit more pleasant, Harlow wants to have “Bikes on Roadway” signs installed. She made an official request to PBOT with her idea. Harlow heard back from a PBOT civil engineer and she shared the response with us. PBOT declined the request, but the engineer makes a reasonable case for his decision. The reply (below) might help others understand the thinking PBOT does before deciding whether or not to install signage (it’s also cool to see a government agency take someone’s request so seriously)…

Sandy Blvd as it appears in the
Portland Bicycle Plan for 2030.
(Thin orange lines are “City Bikeways”)

Given the existing bicycling environment on NE Sandy Boulevard, you might be surprised to learn that the street officially classified as a “City Bikeway.”

“They establish direct and convenient bicycle access to all significant destinations… and function to allow residents access to Portland’s bikeway network, ideally within three city blocks from any given point. They provide a mobility function and help establish the fine-grained network of a world-class bicycling city… 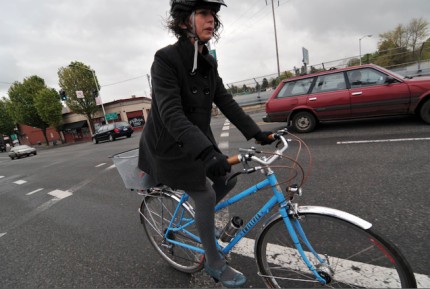 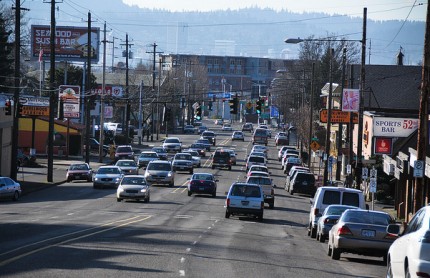 Despite being dominated by cars and offering no dedicated bike access, many Portlanders choose to ride on NE Sandy Blvd. for the same reasons people like to drive on it — because it’s the most direct and efficient route into the Hollywood District and downtown.
(Photos © J. Maus)