It took less than a month for the community to raise $5,000 to fully sign and stripe a new bike route through River View Cemetery.

The route through the privately-owned cemetery is a popular shortcut through Portland’s southwest hills. Public access is allowed, but that access has been threatened by inconsiderate riding and safety concerns by the land owners.

Tomorrow, (Tuesday, 4/27), a road in the lower portion of River View Cemetery will be close all day to all traffic due to a construction project at the mausoleum. Cemetery GM David Noble says bike traffic will not be able to get through:

“A large crane with its outriggers will be completely blocking the road, as well as the shoulders so there is no way for anyone to even walk their bicycle through to slip by (not that we want them to anyway, since it is a very dangerous construction zone).”

As a follow-up to our story on Monday about a new bike route being signed through River View Cemetery, we’ve received a map of the route.

View the map below and consider helping River View raise the $5,000 to add signs and pavement markings to the route (details on how to donate here). (On a related note, the folks at River View Cemetery recently counted bike trips and found that over 700 people ride through the property each day.) 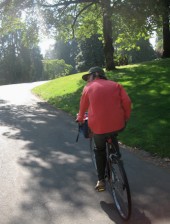 Biking through the cemetery.
(Photo: mumblion/Flickr)

A fundraising campaign has begun to pay for signage of a popular bike route through River View Cemetery.

People on bikes prefer the route through River View because it’s a safe and pleasant alternative from the high-speed auto traffic on Taylor’s Ferry and other major roads nearby.

Cemetery staff have voiced concerns about unsafe bike traffic through their private property for nearly four years. Back in April 2006, they threatened to prohibit bike access if more wasn’t done to curtail inconsiderate and dangerous riding.

The issue did not go away and tensions flared up again last fall after cemetery staff installed speed bumps which some riders blamed for crashes that resulted in serious injuries.

An issue that has been simmering since April 2006 has finally reached some resolution. The River View Cemetery Association Board of Trustees has met several times in the last few weeks to address the issue of bicycle traffic going through their property. The issue reached a boiling point in September when the cemetery installed a series of speed bumps that many felt were draconian and unduly severe (they caused several injuries).

After forming a committee to look into the issue further and inviting a representative from the BTA from PBOT out to look at the roads, the non-profit’s Executive Director David Noble has announced, “for the time being, no restriction on bicycling has been enacted.”

“We are formulating a strong core of people who are in leadership positions in the bicycle community… to discuss how our concerns can be mitigated without simply closing the cemetery to bicycle traffic.”
— David Noble, Executive Director of River View Cemetery

David Noble, the executive director of River View Cemetery in Southwest Portland, has planned a meeting with representatives from the City of Portland Bureau of Transportation and the Bicycle Transportation Alliance next week. The meeting will revolve around how to manage bicycle traffic through cemetery grounds.

The cemetery — which is on private property that provides a popular alternate route for bike traffic — is concerned with unsafe riding and disrespectful behavior by some riders. The issue has been simmering for years, but came to a head last week after we reported on the installation of three sets of new speed bumps. 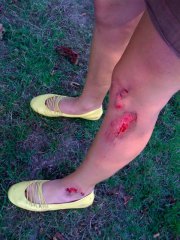 David Noble, executive director of the non-profit Riverview Cemetery, didn’t want to do it, but he felt he had no other choice.

About one week ago, Noble instructed his groundskeepers to install three sets of speed bumps on the property. The reason? He says people on bicycles have been riding too fast and without consideration for cemetery visitors. The bumps were a last-ditch effort to prevent a serious collision and to ingrain into people on bikes that they need to slow down.

And it’s far from a new problem. Back in April of 2006 we reported that — after a near miss between a man on a bike and one of the cemetery’s maintenance workers — Noble considered banning bikes from the ground completely.

But for many people who ride through the cemetery (it’s private land, but the roads are open to bicycle traffic to avoid the nasty conditions on adjacent Taylor’s Ferry Road), the new bumps are more than just a speed deterrent, they’re downright dangerous.

KOIN and the Oregonian are reporting a story about a woman who was coming home from Lewis and Clark College tonight when she fell down a steep bank while riding through the bike path in Riverview Cemetery (a popular shortcut to the Sellwood Bridge).

The tranquil roads inside the Riverview Cemetery (Google map) are a popular daily route for hundreds of Portland cyclists. Commuters prefer the cemetery because alternate routes like Barbur Blvd. and Terwilliger Blvd. are full of high-speed motorists. Recreational cyclists like the scenery and access to the Waterfront Trail and many competitive cyclists use the cemetery’s hilly roads for training sessions.

However, a recent episode between a cyclist and maintenance workers has led to a discussion with the cemetery’s management about safety concerns that may lead to a future prohibition of bikes inside the cemetery.