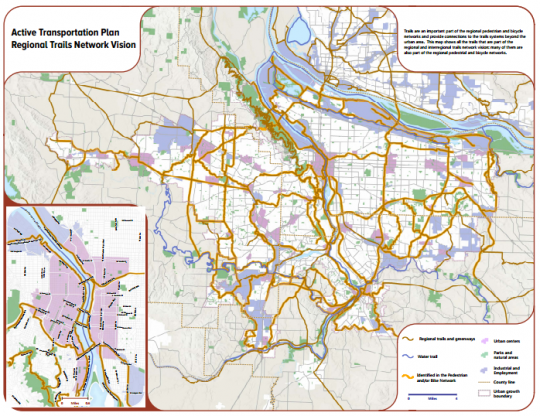 When you stitch together the long-term bike plans of every city in the area, connect a few dots and put it all on one map, you get something pretty spectacular.

“Since Metro seems to be easily cowed by the minority nowadays, and we have mayors who think it’s okay to flout the law, it’s time for a lawsuit.”
— Rex Burkholder, former Metro councilor

As we shared on Wednesday, the mayors of 21 of the 25 cities represented by Metro have signed a letter that calls for changes to a draft version of the Regional Active Transportation Plan (ATP) that would render it powerless. They say the wording in the plan is too strong, that it’s a “mandate”, and that if it’s absorbed into the all-powerful Regional Transportation Plan, the biking and walking projects in the ATP would wrestle precious funding from other road projects.

Yesterday that topic came up again at a meeting of regional leaders at Metro headquarters. Remember, at issue here is only a non-binding “resolution of acknowledgment” for work done on the plan thus far. Since the plan is being developed with some federal funding, a vote by Metro council to acknowledge its progress is required by the feds. But this vote has struck fear in the hearts of mayors from suburban cities surrounding Portland. What are they afraid of? Why do they want to delay this plan and weaken its language? 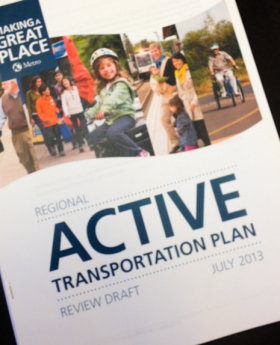 Will it be rendered powerless?
(Photo © J. Maus/BikePortland)

Mayors from 22 of the 25 cities represented by Metro are pushing to make the Regional Active Transportation Plan (ATP) relatively powerless. The plan has been in the making for over two years, and Metro has been showing off the 70-page review draft via public open houses since May.

Lake McTighe, the Metro project manager in charge of the ATP, had planned to have a resolution pass by Metro Council by next month that would have moved the plan to its next step toward implementation. However, a power struggle between Metro and regional mayors became evident last month as they feared the plan would give Metro too much power and would force their hand in implementing new bicycle pathways, walking facilities, and other active transportation projects. 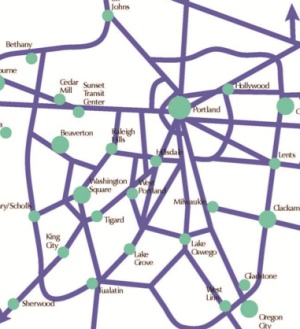 The “spiderweb” of Regional Bicycle Parkways
as envisioned in Metro’s plan.

Metro will host an open house tomorrow (5/23) for their Regional Active Transportation Plan. The plan will be the region’s first specifically tailored to bicycling, walking and access to transit. The planning effort has been underway for well over a year and is set to wrap up by the end of next month. In summer of 2014 the plan’s recommendations and a list of prioritized projects will be proposed for adoptions into the Regional Transportation Plan.

The plan’s ambitious scope includes: the creation of a new set of design guidelines for bicycle facilities; an update to regional biking and walking maps; integration of the existing active transportation network; identification of a network of ‘Regional Bicycle Parkways’; a recommendation of strategies for implementation, and more.

In other words, this is a big deal. As its projects get adopted into the RTP, Metro’s Regional Active Transportation Plan will give regional policymakers the crucial political breathing room and decision-making framework they need to make real and significant investments that could vastly improve bicycling conditions. 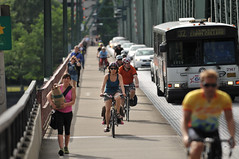 Bike? Walk? Bus? Metro wants to know
more about how you get around.
(Photo © J. Maus)

Metro has launched a survey to learn more about how Portlanders get around without a car.

The survey is part of a multi-year effort to create a Regional Active Transportation Plan (ATP), a first for Metro. The survey went out to the nearly 6,500 people who have signed up for Metro’s Opt In Panel.

The manager of Metro’s active transportation efforts, Lake McTighe, says the survey is the first step in “gaining some background that will help inform the planning process.” McTighe acknowledges the limitations of the Opt In panel (whose members are mostly white and from Multnomah County) and says the data will be just one source among many.