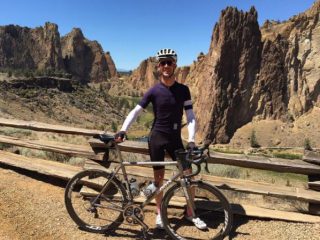 James “Bucky” Buckroyd, a product designer by day, loves to sweat the details on cycling kit. He also loves to sweat on his bike. Check out his product reviews below and delve even deeper on his website, BuckyRides.com. 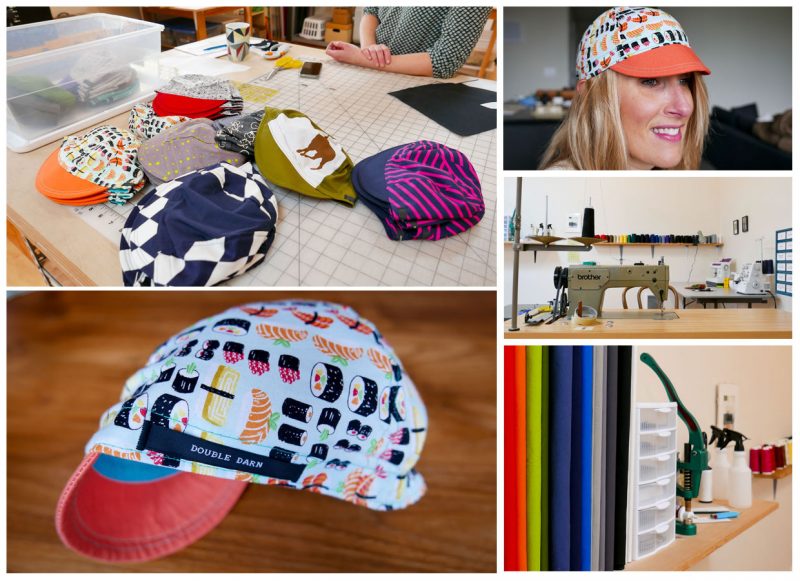 Double Darn’s creative and quality caps have found a strong following in Portland and beyond.
(Photos: James Buckroyd)

Story by our resident “Product Geek” James Buckroyd, who approaches products with an eye for how they solve problems. He previously shared how to maintain your waterproof gear.

If you’ve been cycling for a while you probably already know some of the functional benefits of an under-the-helmet cap. You have probably also tried a few and found that not all of them are the same. There’s a huge variety of fits, brims, shapes and sizes, not to mention all the different materials, prints and colours.

Named after a common hand stitch, Portland-based Double Darn was started 12 years ago by local artist Misia Pitkin. Misia, who grew up with artist parents and started sewing at an early age, graduated from Pacific Northwest College of Art with a bachelor’s degree in fine arts and an interest in clothing. She translates her art skills into fabrics, adding structure and shape to create a form of soft sculpture. She started repairing clothes and dabbling in creating rain jackets, but she found her passion was in caps.
END_OF_DOCUMENT_TOKEN_TO_BE_REPLACED

Keep it waterproof: A guide to getting more out of your gear 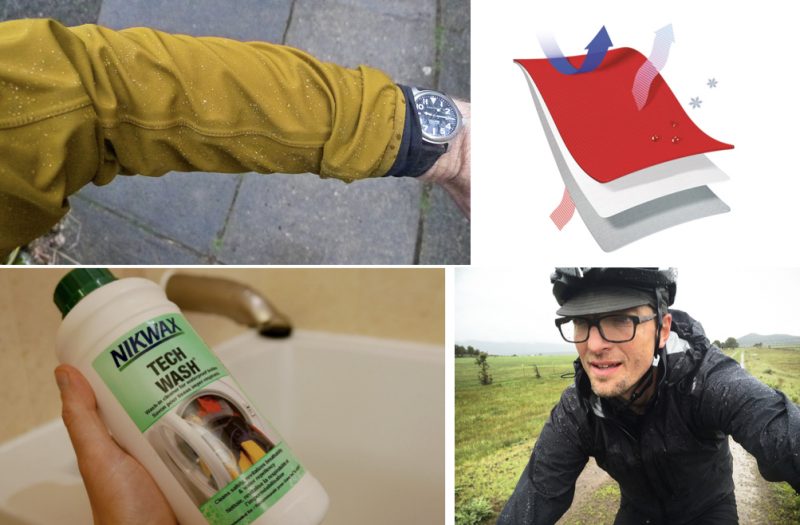 You know the feeling: It’s nice when it beads, but it doesn’t last forever.
(Photos: J. Maus/BikePortland and James Buckroyd/BuckyRides.com)

James Buckroyd is our Product Geek. See his previous stories here and delve deeper via his website BuckyRides.com.

We spend a lot of time choosing our gear carefully and as we know cycling gear is expensive! Especially when it comes to all-weather wear. But do you know how to keep your Rapha softshell going strong? Your Castelli Gabba still stretchy, or your favorite Showers Pass shedding through the spring? With a little investment in care you can keep your gear performing well.
END_OF_DOCUMENT_TOKEN_TO_BE_REPLACED 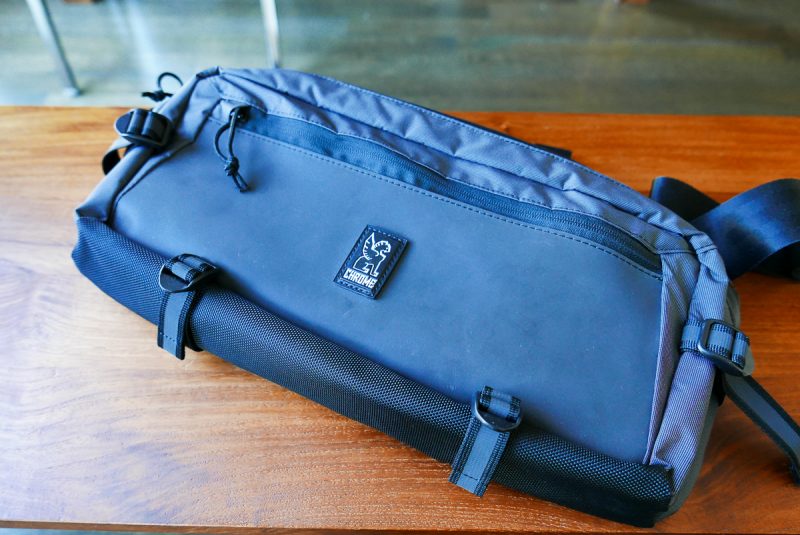 The Kadet by Chrome, a company based in northwest Portland.
(Photos: James Buckroyd/BuckyRides.com)

James Buckroyd is our resident product geek. See his past reviews here.

I have been slinging this guy around the city for a while now. Mainly on small in-city runs to and from meetings where I needed a few essentials but not a massive bag full. Here’s what I found: END_OF_DOCUMENT_TOKEN_TO_BE_REPLACED 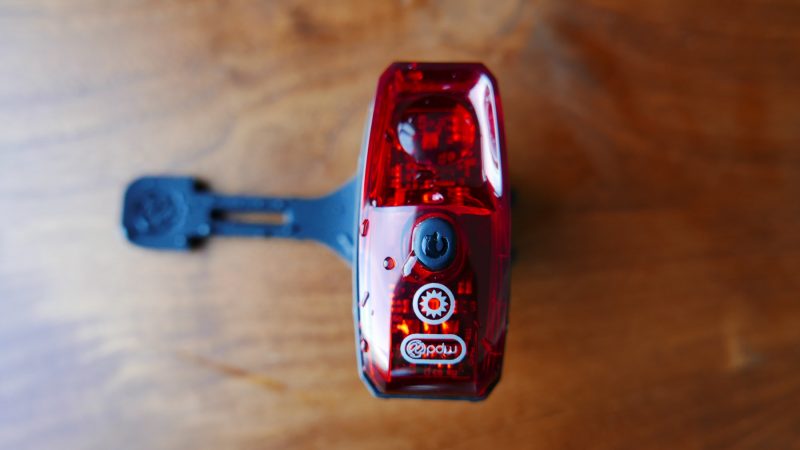 — JBucky (James Buckroyd) is an avid cyclist and “product geek,” — he blogs at buckyrides.com which he set up to document interesting routes, but also houses product tech reviews. Read his past BikePortland contributions here.
END_OF_DOCUMENT_TOKEN_TO_BE_REPLACED 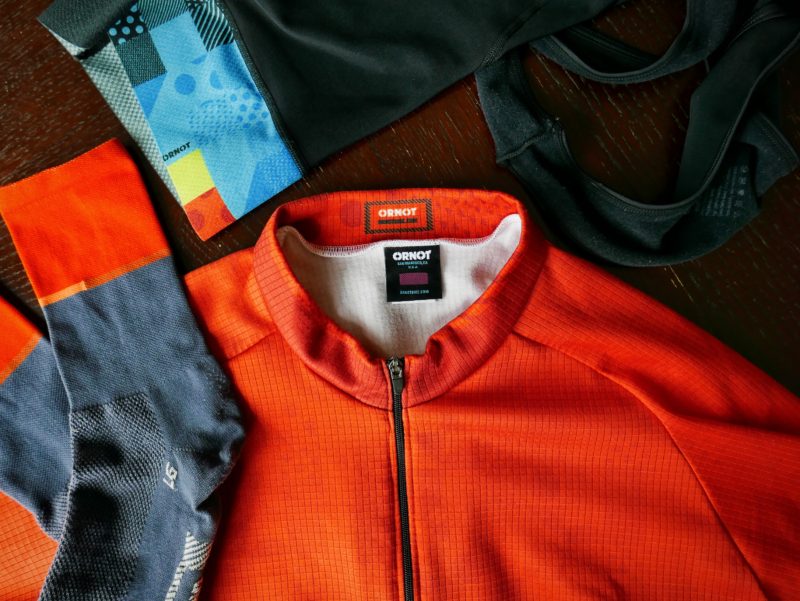 Socks, Bib shorts and jersey colourways sync up for a put together look.
(Photos: James Buckroyd)

Pretty psyched for a change of season, I ordered up some new gear.

I needed some new colder weather kit and wanted to try something different, so I grabbed a few things from Ornot, a smaller San Fransisco company that has been around for about four years. Ornot’s brand stuck in my mind from the play on words in their clever marketing campaign: “You can be a rolling billboard, Ornot.” The whole point being that their kit has no logos, no sponsors, no massive branding. In the cycling world we’ve all been subjected to logos everywhere on cycling kit — some tastefully done, some not. Browsing through the website you see an array of products all with minimal branding and really nice patterns and designs.

I ordered up some winter bib shorts, a winter jersey and socks for the full matchy-match look.

Here are my impressions…
END_OF_DOCUMENT_TOKEN_TO_BE_REPLACED 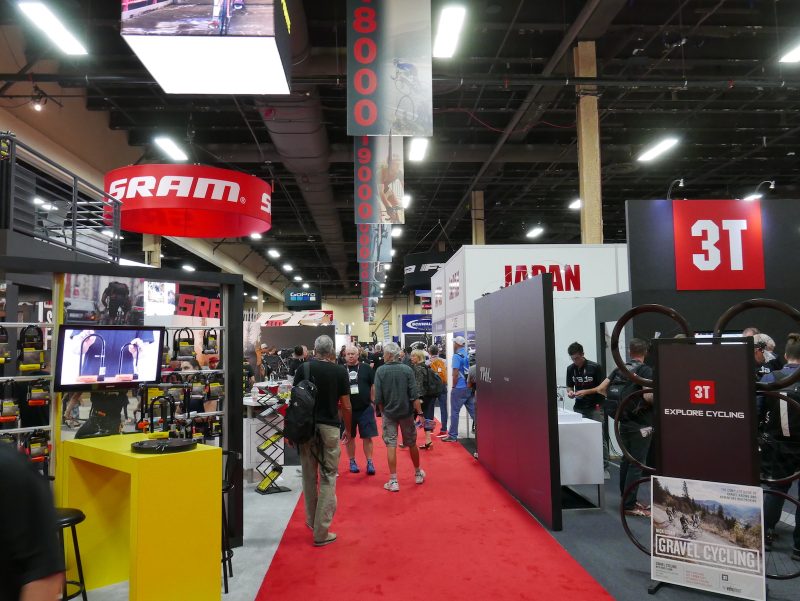 James Buckroyd is a professional product designer who happens to be addicted to cycling and is always seeking out the perfect route and the perfect piece of gear. He blogs at BuckyRides.com. His last review was Chrome’s Hondo backpack.

Last week I headed to Interbike Vegas 2017, where cycling industry veterans gathered to show off the latest trends and technology in cycling. The first two days of Interbike were the “Outdoor Demo,” where cycling industry pros get to view and ride new bicycles, followed by three days of trade show. With three exhibition halls full of gear, Interbike gives you a glimpse of the future.

END_OF_DOCUMENT_TOKEN_TO_BE_REPLACED

The Hondo by Chrome, which is now a Portland-based company.
(Review and photos by James Buckroyd)

James Buckroyd is a professional product designer who happens to be addicted to cycling and is always seeking out the perfect route and the perfect piece of gear. He blogs at BuckyRides.com. His last review was the OttoLock.
END_OF_DOCUMENT_TOKEN_TO_BE_REPLACED 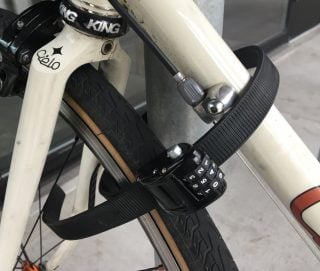 Here are my impressions after using it for several months…
END_OF_DOCUMENT_TOKEN_TO_BE_REPLACED 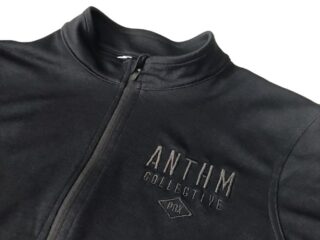 By our newest contributor, James Buckroyd.

In the world of product development, this is how it usually goes: You have a great idea, you make contact with an agent in Hong Kong or Mainland China and you start in a series of negotiations. After many long e-mail chains and late-night phone calls you begin to develop a product.

Unfortunately, what gets lost in the back-and-forths with the factory are the fine details that are essential to make the product shine in an ever-demanding consumer market. As you view sample after sample from your offshore agent, you realize things aren’t as perfect as you’d like them to be.

“Basically we wanted gear to ride in that represented the values we believe in,” he shared with us recently. “So we went out and made it.”
END_OF_DOCUMENT_TOKEN_TO_BE_REPLACED