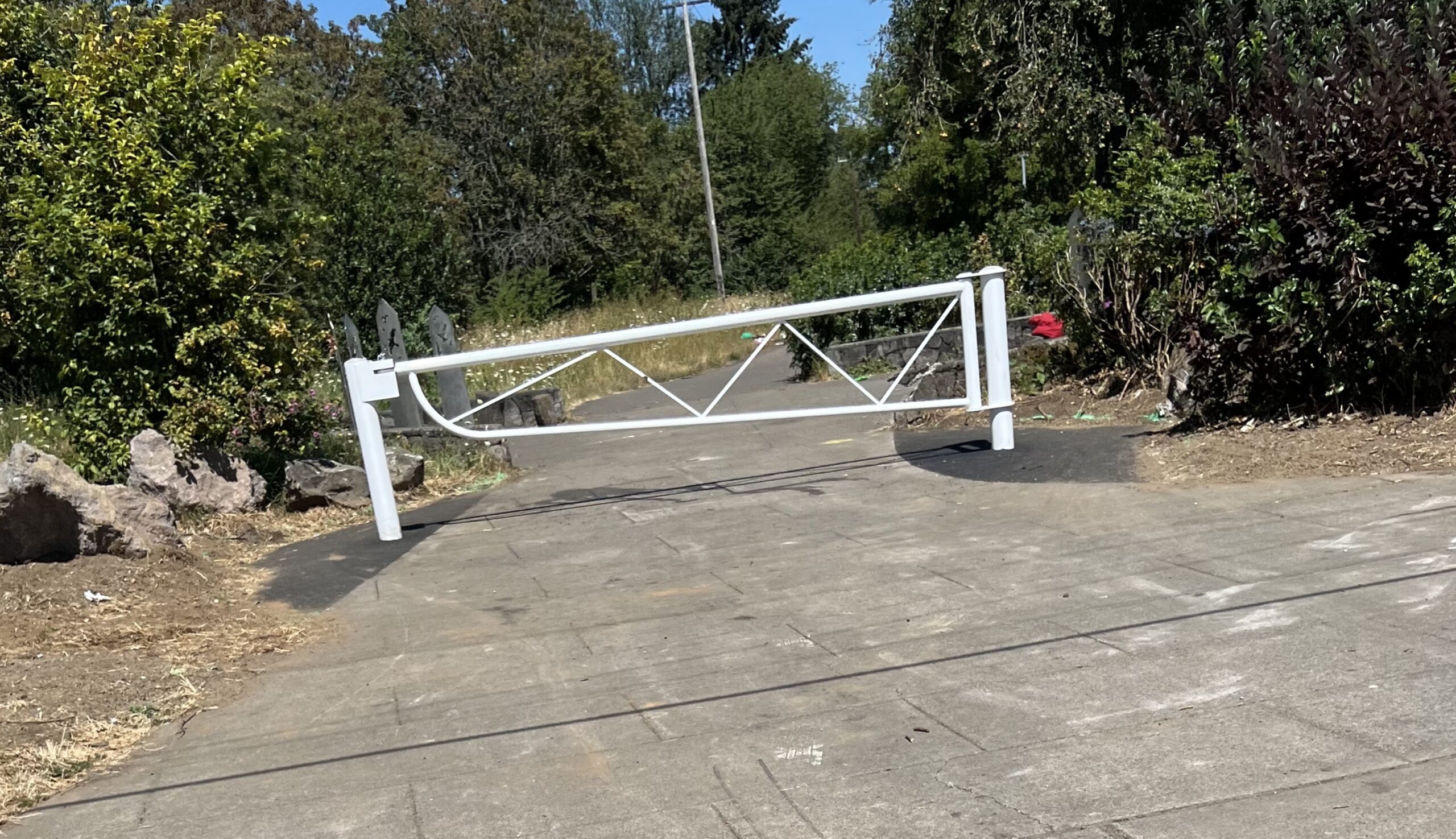 The Portland Parks and Recreation bureau has finally had enough with people driving cars onto the Peninsula Crossing Trail in north Portland. This path is a key part of the 40-Mile Loop and an important north-south route that offers a carfree option for walkers and rollers between North Willamette Blvd and North Columbia Blvd, a distance of just over one mile.

Unfortunately, many people have erased this from their list of preferred routes because they feel it has become unsafe due to the cars some camp residents use and park on it illegally. For over two years now other neighborhood residents have voiced concerns through official channels. In May 2020, four neighborhood associations (Bridgeton, Arbor Lodge, Overlook and University Park) sent a joint statement to City Hall that stated, “We request that the City of Portland clear campsites located in parks, waterways and public paths.”

In the last year, the problem of cars on this path has become larger. When I biked on it in July 2021 I saw two people pull right off of N Lombard onto the path and numerous cars and trucks parked at campsites (see photos below). With narrow path openings and poor visibility, there has been alarming potential for a collision between an unsuspecting path user and a car driver. Now that potential has been all but erased.

Heavy-duty gates now block the entrances to the path. Parks has cleared a few feet and added pavement to the edges so path users can get around the gates, but the path looks much less welcoming now. The entrances are also much narrower than before and people pulling trailers, riding trikes or other large cargo bikes might not be able to maneuver around them (see update below for details). Parks faced a similar conundrum on the Columbia Slough Path back in January when they installed large concrete barriers to prevent driving, but made it nearly impossible to bike around (those barriers are now gone).

That might be welcome tradeoff, based on reactions from some neighbors in a KATU a story about this last week:

“The city’s Street Services Coordination Center tells KATU that keeping vehicles off the trail is the first step in the push to clean up and clear the camp, where neighbors have complained about cars speeding through and doing damage for years… ‘It’s been a nightmare for us here,’ said Corah. ‘They roar up and down the road, all hours of the day and night. Right now, it’s quiet because of the jersey barriers that are going in, and the gates.’

Corah’s wife was so happy to see the boulders, blocks, and gates, she hugged the workers installing them.”

One factor that has upped the urgency of this issue is the announcement earlier this year of a Safe Rest Village that will be located adjacent to the path. Commissioner Dan Ryan, who oversees the Joint Office of Homeless Services, is under a lot of pressure to restore a sense of safety to the path as that village site gets constructed.

I’ve asked Parks for a comment and more details about the gates and will update this story if/when I hear back.

There are a total of six gates installed ; they are at the entrances to the sections running from N Princeton to N Lombard, N Lombard to Fessenden, N Fessenden to Columbia Blvd. (gates at each entrance, total of 6)

There are 75 boulders, 30 “superblocks” (cast concrete blocks with chains that can be locked together, or stacked, but are hard to move), along with six gates to prevent car entry. All the barriers of any sort that are installed still allow for entry by people on bikes, with mobility devices, and/or on foot.

Regarding the cycling community comments on the gate bypasses, we identified this condition and facilitated repairs which made the bypasses meet the project specification of 48” width. This work was completed by 10 am on Tuesday morning (yesterday, 8/9/22). This project has been completed at the direction of elected officials and as such, we refer you to Commissioner Rubio’s office for any information on the rationale for this project.” 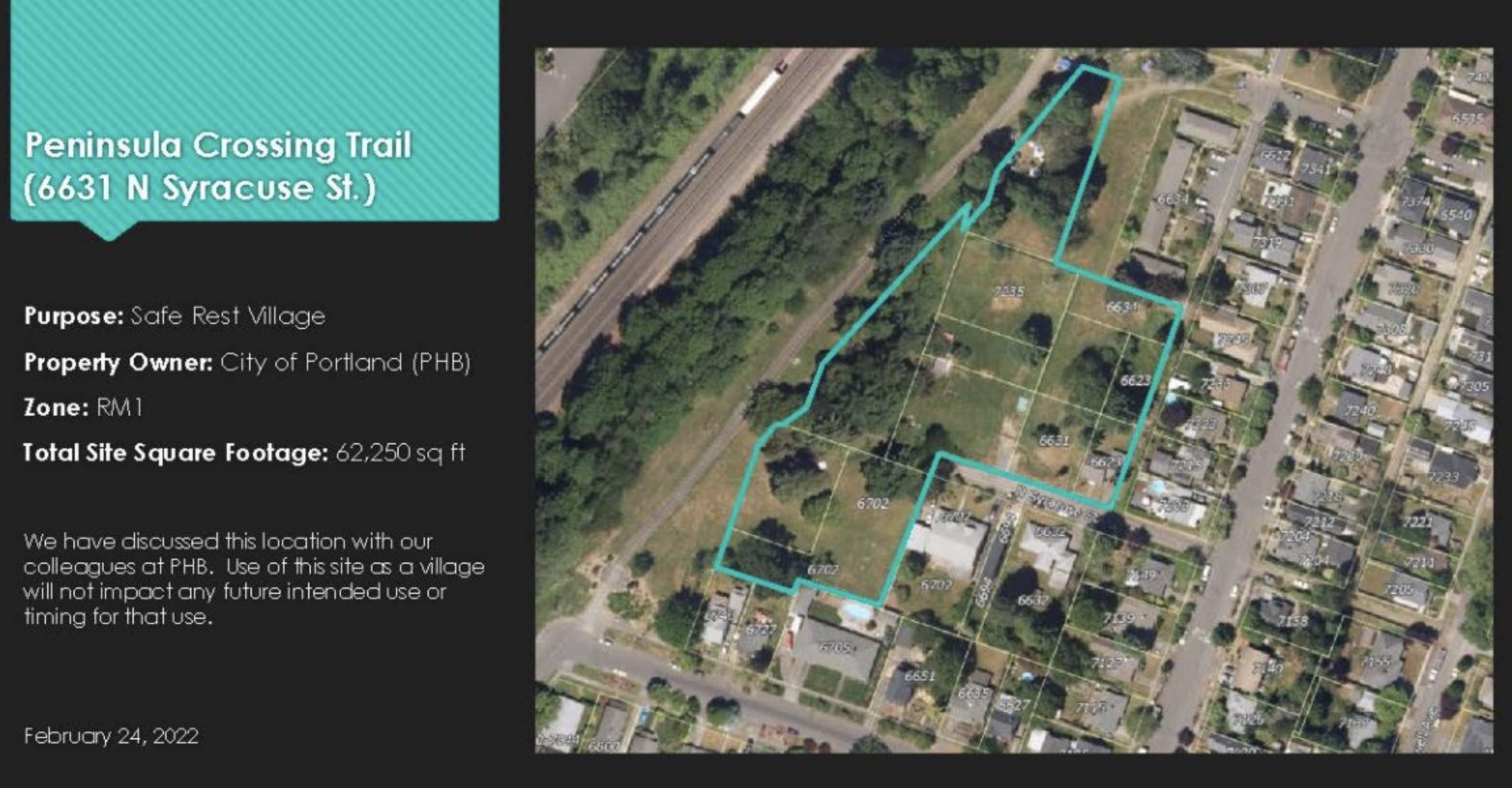 Video from July 2021 riding past the location of a future Safe Rest Village. The village would be on the right side in this view. 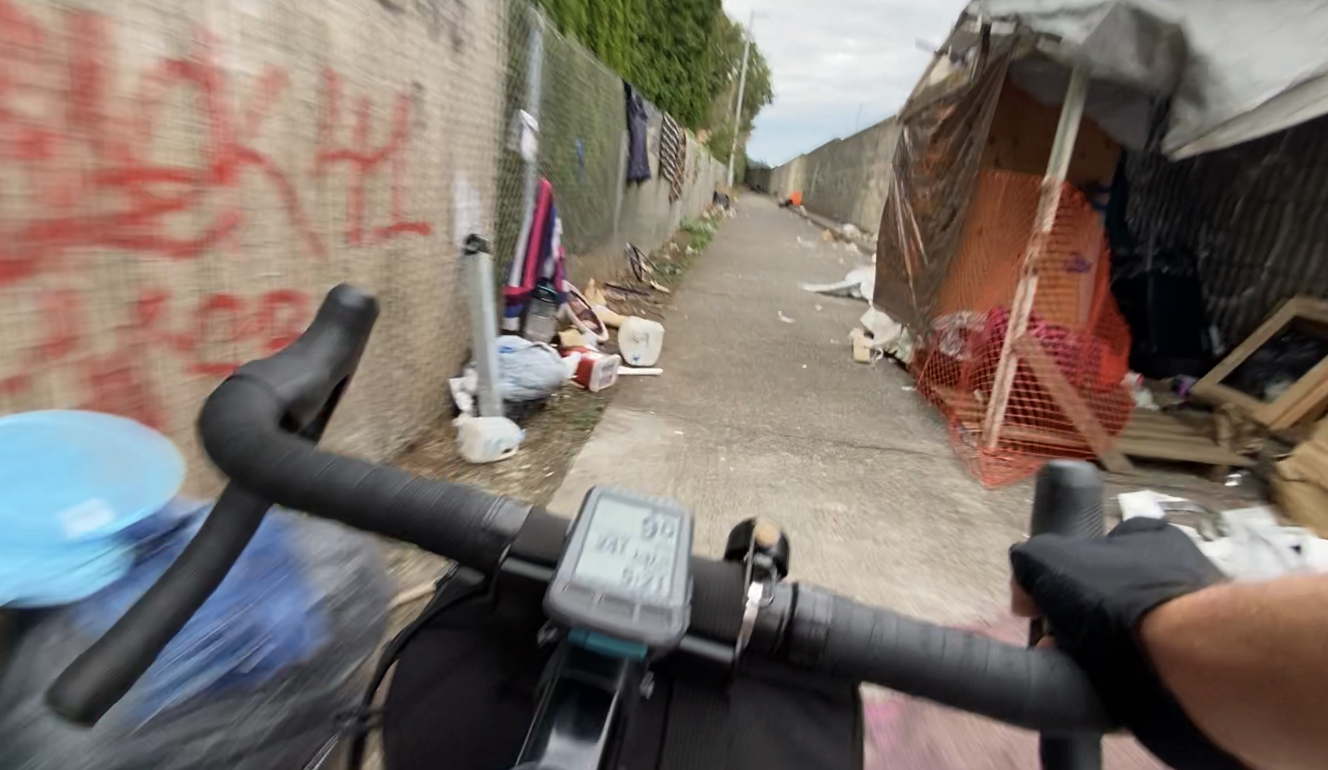 “We request that the City of Portland clear campsites located in parks, waterways and public paths.”
— from a statement signed by four north Portland neighborhoods

Four north Portland neighborhood associations have issued a joint statement about homelessness. Among their requests is that government agencies work harder to clear campsites located in parks and on public paths.

Throughout the city, vital parts of the transportation network are blocked and/or dominated by peoples’ homes, belongings, and trash. Without enough places to live or social services to help them get off the streets, thousands of Portlanders sleep along streets — often directly adjacent to bike lanes and carfree paths. These paths are often in places where surface streets are unsafe, unconnected, or for some other reason not a safe alternative for bicycle users and walkers. This has led to a sad, complicated and frustrating problem for everyone.

Bicycle users are viscerally aware of this issue. BikePortland has fielded questions and concerns about it for years, ever since people started creating camps along the Springwater Corridor path in 2014. Last year we reported that conditions on the I-205 path had reached an unacceptable level and just this week a reader shared that some of the camps remain. For many people, this means many local paths are no longer an option.

In the joint statement posted yesterday, the neighborhoods of Bridgeton, Arbor Lodge, Overlook and University Park say Covid-19 has made a bad problem worse and that it’s time to respond. 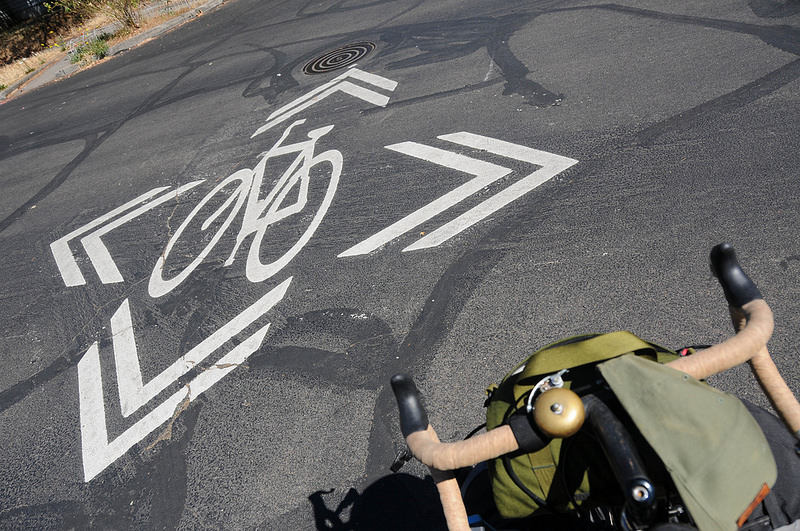 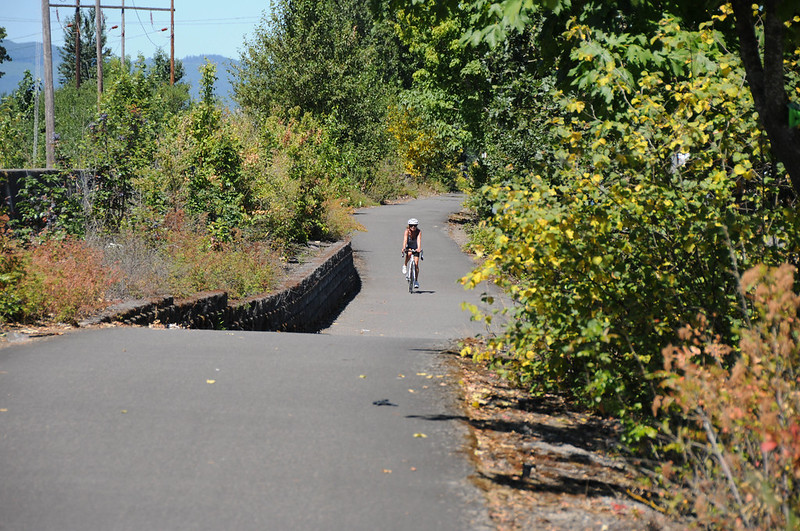 Did you know there’s a ride that’s 80 percent carfree and will take you from inner Portland to beaches on the Willamette and Columbia rivers on a mix of quiet residential roads, sidewalks, and paths?

We all know how Portland’s 90-mile network of neighborhood greenways are great at getting us across town; but they can also help us get away from town.

A Portland Bureau of Transportation staffer once referred to our neighborhood greenway network as a “bus system for biking and walking.” And similar to how some of us use light rail to expand the scope of rides (like taking MAX to Hillsboro to reach Stub Stewart State Park), our neighborhood greenways enable smaller journeys more suitable for riders of all ages and abilities but no less fun and adventurous.

This past weekend my six-year-old son Everett and I hopped on a borrowed tandem (thanks Peter!) and headed out to Kelley Point Park — an isolated, 100-acre stand of cottonweed trees and grassy meadows at the confluence of the Willamette and Columbia rivers.