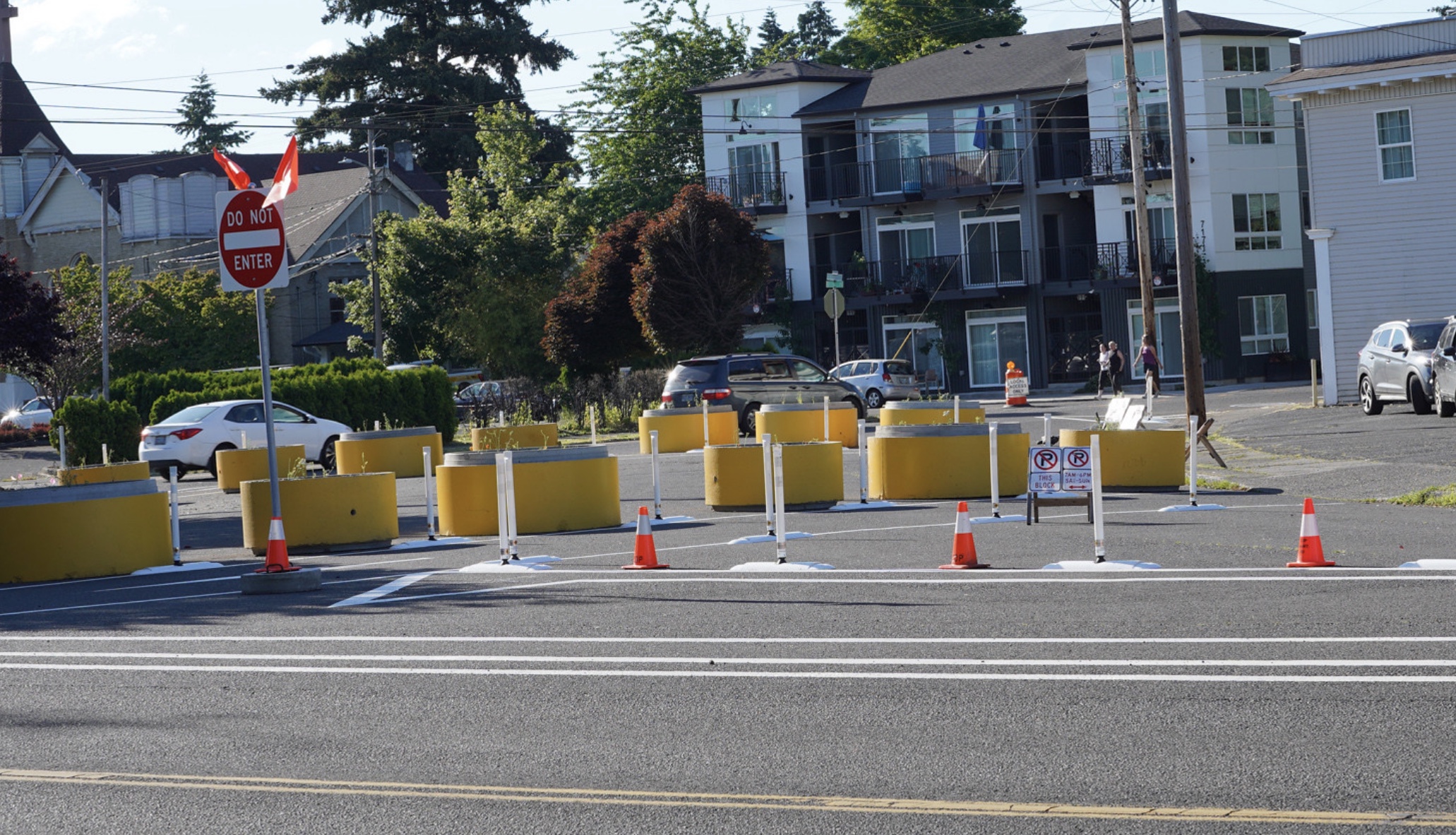 When multiple bureaus at the City of Portland came together with concerned residents on a novel approach to address a disturbing rise in shootings and speeding in the Mt. Scott-Arleta neighborhood last fall, many people responded with ridicule. Now a new report builds on initial claims that it just might be working.

We’ve taken a keen interest in this project because it thrusts the topics of street safety and traffic violence into the much broader (and more politically salient) conversation about how to improve public safety and reduce gun violence. There’s also a political angle here: Portland Bureau of Transportation Commissioner Jo Ann Hardesty spearheaded the effort in response to concerns she heard from neighborhood leaders.

Hardesty has a lot riding on this because it has become a signature project for two of her biggest focus areas: transportation and policing.

The Mt. Scott-Arleta Intervention Pilot was inspired by concerns from people who live in the neighborhood and it leans on public health experts and a planning concept known as Crime Prevention Through Environmental Design (CPTED). It included barricades and restrictions on driving behaviors in streets, community events in Lents Park, more visible patrols by Portland Police officers and Park Rangers, video camera installations and business, and relationship-building between agencies and neighborhood groups.

Back in March, five months after the pilot began, Hardesty issued a statement saying the efforts were paying off. She cited a 64% reduction in shootings (compared to the previous three months) and positive feedback from residents. This initial evaluation of the pilot was done with city data and was not independently verified, so many people dismissed it.

A new report by an independent consultant released in June 2022 says more data is still needed, but the project appears to be having a positive impact. Here’s a snip from the 14-page Mt. Scott-Arleta Community Safety Project Evaluation Report (PDF) submitted to the Portland Office of Management and Finance (OMF) Community Safety Division on June 30th and compiled by Michelle Helman Consulting:

“Findings are promising and suggest that the project may have contributed to the decrease in shootings during the project timeline. Analysis of Portland Police Bureau (PPB) shooting data shows the number of shootings decreased in the ‘project area’ (where joint patrol missions with Portland Parks & Recreation took place) during the implementation timeline (Sept-Dec. 2021) – within a trend of overall increase. An increase in shootings post-intervention suggests the intervention may [have] had an impact, and this demonstrates the need for the project to continue with more comprehensive data analysis to determine outcomes.

Challenges to determine whether the intervention caused or contributed to the change include that statistically; shootings decrease in the summertime, there is inconsistency in reporting the number of shootings per month, and it is unclear how the project work area was defined by all sources.”

I asked Lisa Freeman, a program manager at the OMF Community Safety Division, for a bit more context. She said after the initial analysis, the city wanted an external evaluation to more carefully review the project.

“The external evaluation largely validated the findings reported in March,” Freeman shared. “And was able to more comprehensively document the project, process of implementation, and offer recommendations for future activities.”

That “future activities” part is important because while we can debate the statistical impact of this approach, there’s no debating that the City of Portland plans to double-down on it. Mayor Ted Wheeler likes the approach so much he made it one of the focus areas of his new gun violence reduction plan.

Yet while the main takeaway is positive, the report lists several potential pitfalls as the city looks to continue and expand this type of work: Communication strategies need to improve so there’s not another (inaccurate and click-baitey, yet understandable) “orange barrels to reduce gun violence” news cycle; local volunteer time cannot be taken for granted; asking PPB officers to work overtime is unsustainable (and politically unpalatable); and more BIPOC and non-English speaking community members need to be included in the planning.

Look for this project and others citywide to become more common as more Portlanders realize that many of our public safety problems are interconnected, and bureaus like parks and transportation can have just as much impact as police.

Check out the project summary or full report. 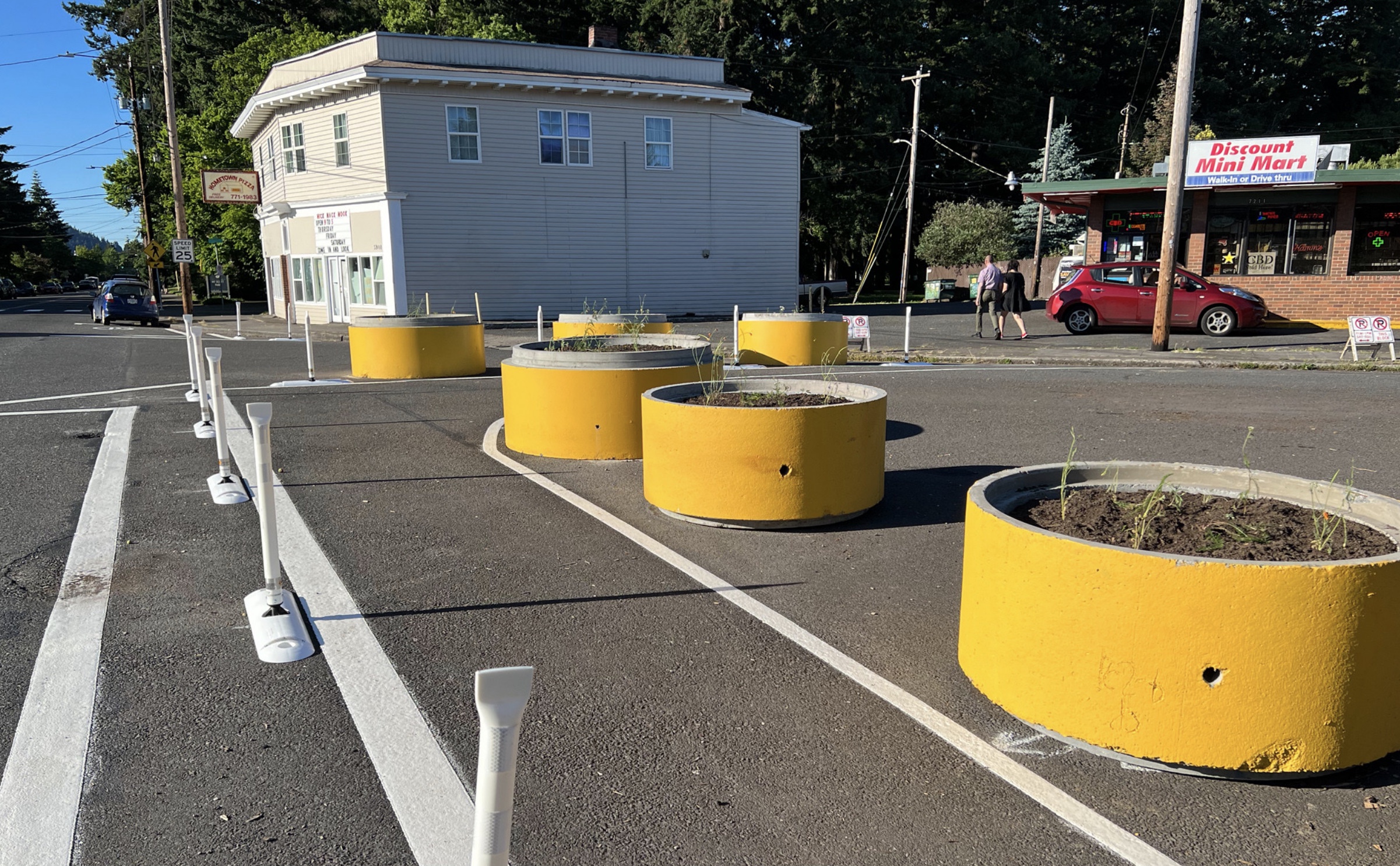 When Portland Transportation Commissioner Jo Ann Hardesty used traffic calming tools to address a spate of gun violence in the Mt. Scott-Arleta neighborhood last fall, many people scoffed at the notion. “People are shooting at each other, and she’s putting orange barrels in the road?!” is how many of the derisive comments sounded.

But not only did people who live in that neighborhood appreciate the approach (which included much more than traffic-related interventions and was a multi-bureau effort that included Portland Parks and the Police Bureau), it was also backed up by public health research.

Now Hardesty’s office must be feeling even more validated, because last week Mayor Ted Wheeler gave a serious nod to those tactics in his emergency declaration to combat gun violence:

“We will be expanding place-based interventions in neighborhoods that are caught in the crossfire of gun violence… these efforts will work with communities to identify environmental changes to interrupt gun violence. These interventions could include increased lighting, traffic diversion, or the use of non-law enforcement personnel to maintain positive environments in public spaces.”

In his Safer Summer PDX plan, Wheeler said his team will address gun violence with a three-pronged approach funded by $2.4 million that would include, “place-based investments… to address environmental factors conducive to gun violence.”

The best example in Portland of these “place-based interventions” is the new plaza that has bloomed in the place of a former slip lane on SE 72nd and Woodstock. In that project, Hardesty worked with the Portland Bureau of Transportation to reduce driving access in a location that had been the site of many speeders — who were all too often fleeing a violent act or in the midst of one.

This additional injection of political and financial capital from the Mayor’s office should raise urgency around the idea that the causes of — and solutions to — gun violence and traffic violence are often closely linked. Put another way, if we calm the streets, we calm the violence.

“In some areas it might be as simple as improving lighting at an intersection,” said Stephanie Howard, the director of community safety for Mayor Wheeler, in a phone conversation last week. Howard, a former trial attorney in the Denver, Colorado public defender’s office, said they’ll be looking to fund creative approaches to traffic-related interventions.

“This is a problem that requires all angles to find solutions to. There is no one approach that is the right approach,” Howard said. “It’s going to take every kind of intervention, and this really is about trying to find the most impactful interventions that we can.”

“What we endorse wholeheartedly is collaboration to solve these problems. If bringing bureaus together that can play a role in this overarching problem is effective, which I think it is, that’s what we’re trying to do. We’re just trying to bring all hands on deck to use every tool we have to to address the drivers for this kind of gun violence.” 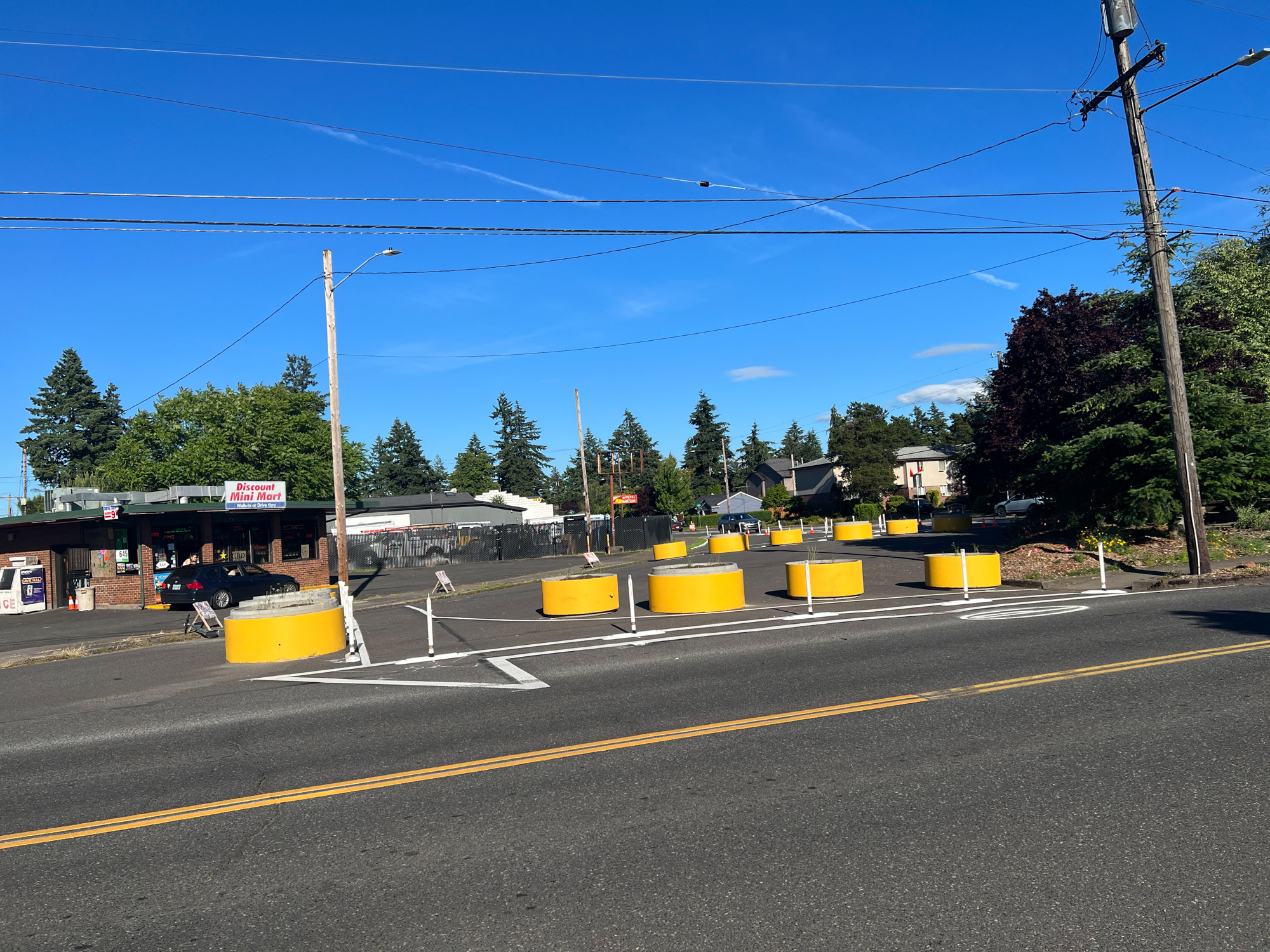 What began on a wish list from neighbors has become a reality.

The wide slip lane between SE 72nd and Woodstock Boulevard that used to provide a speedy getaway for criminals in cars and drivers looking to avoid red lights, is now closed off with 12 large concrete barricades. Arleta Triangle, a community space that used to be on an island surrounded by dangerous auto traffic, is now at the tip of a public plaza peninsula that has become the most high-profile element of the city’s effort to employ the principles of crime prevention through environmental design.

And future plans for the space look even better.

Led by Commissioner Hardesty, PBOT began this project last fall by installing 18 orange traffic barrels on streets around the park. The idea was to discourage people from speeding through the neighborhood and it came in direct response to residents who complained about dangerous driving related to shootings and other crimes.

The barrels are not that effective on their own. They are easily moved to the curb and when I visited on Wednesday, many of them already were (see photo). But when these traffic calming actions are combined with neighborhood relationships that have led to more trust and collaboration to tackle this public safety crisis, more significant change is possible.

It is no small task to close a large slip lane between two busy streets. It’s even harder when there’s a drive-through business smack dab in the middle. However, despite the presence of Discount Mini-Mart and its steady stream of customers in cars, PBOT has managed to pull it off.

Two weekends ago crews added new striping, plastic curbs and bollards, and the aforementioned concrete barricades to create the plaza. The $23,000 investment has yielded a new carfree space and a much quieter intersection.

While I was there yesterday afternoon, I watched mini-mart customers drive up to the service window from the edge of the plaza on 72nd, then exit through a one-way lane PBOT carved through the east side of the plaza so they can continue onto Woodstock.

While it’s odd to have a carfree space bisected by cars, it seems to work fine and it’s a big improvement over the free-for-all that existed before. A worker at the market told me she doesn’t think the changes will stop people from driving dangerously (and even worried that drunk local bar patrons will crash into the barricades), but she did say it might prevent near-misses.

For local resident Nadine Salama, who spearheaded this collaboration with Hardesty’s office after witnessing shootings outside her home, the new plaza is a very welcome development.

“Standing in this same spot last August, when our neighborhood was experiencing a surge in gun violence, and seeing it deteriorate was heartbreaking,” Salama shared in a PBOT statement. “Today, seeing the slip lane closed, the traffic calmer, and more people walking about and enjoying our neighborhood has left me with a renewed sense of hope… I am looking forward to a hopefully wonderful summer in and with my community!”

Summer in the plaza will be even better when PBOT brings to life the full plans for the plaza. In drawings released this week (above), the city revealed plans (based on neighborhood feedback) that include painting the street and adding lights, trees, benches and even a performance stage.

If you’ve feeling a bit of envy, Hardesty says she’s already working to bring a similar approach to public safety to other parts of Portland. “There is optimism we will be able to bring similar interventions to neighborhoods experiencing a high level of violence,” she said.

Stay tuned. And roll over to 72nd and Woodstock to check it out for yourself. 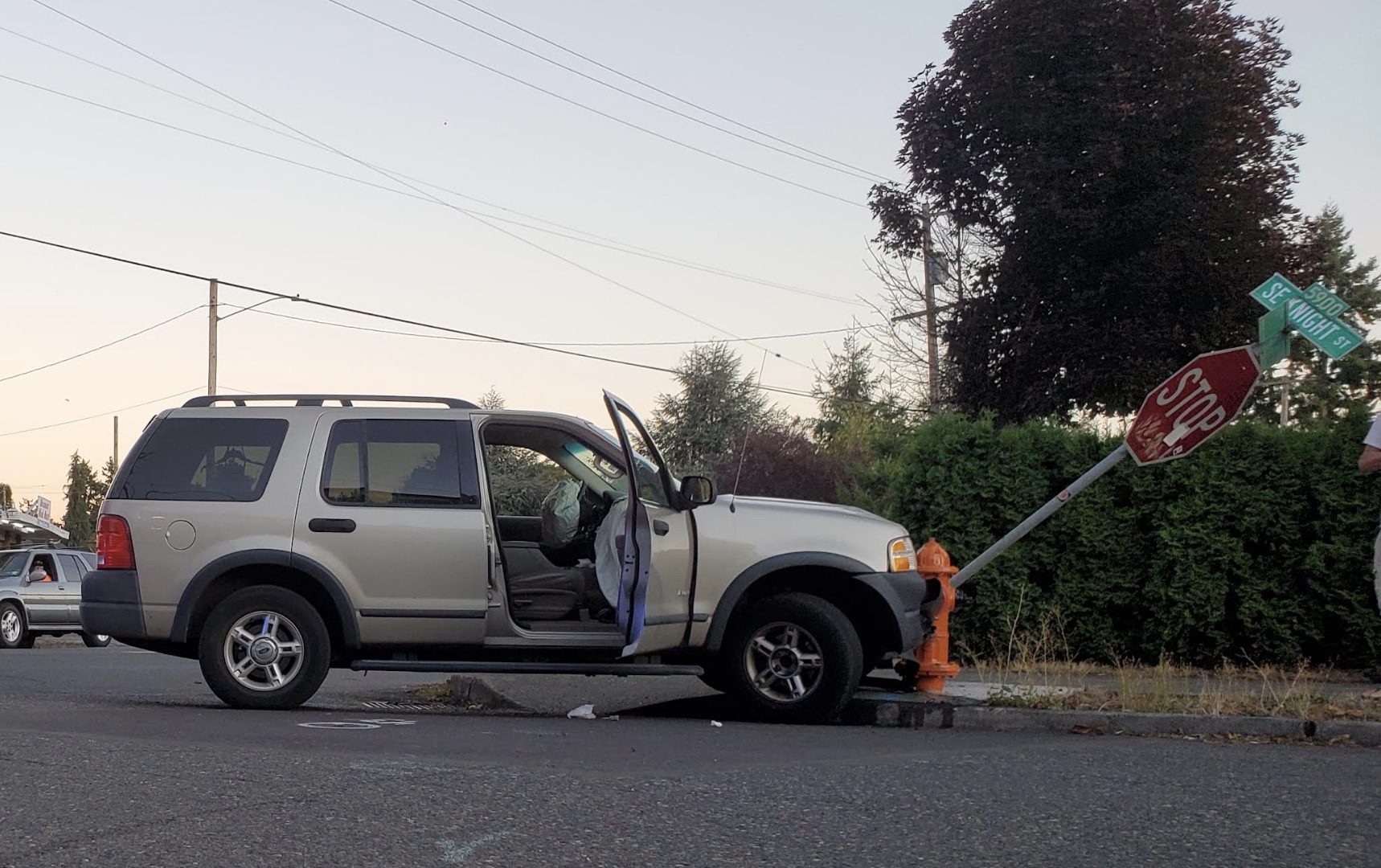 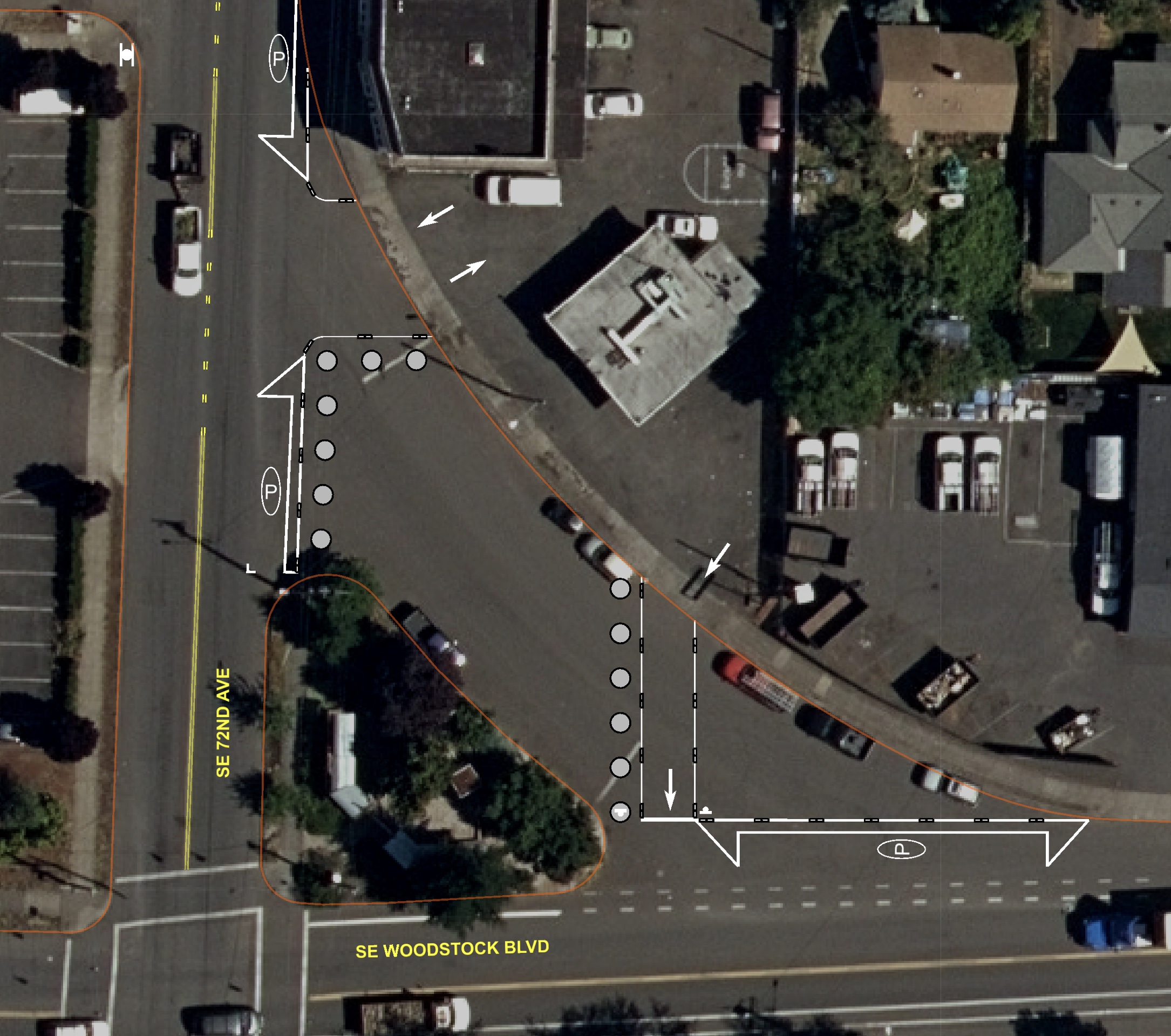 Draft design of Arleta Triangle Plaza and placement of barrels in the street by PBOT. (Source: Commissioner Hardesty’s office)