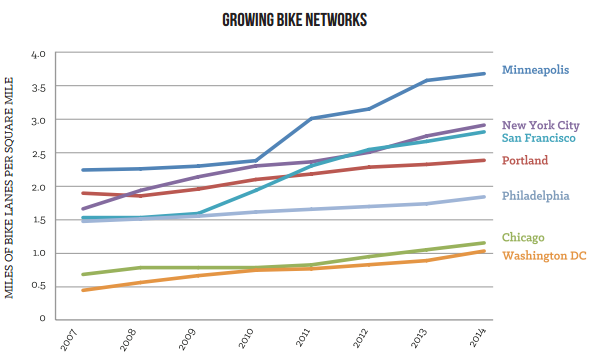 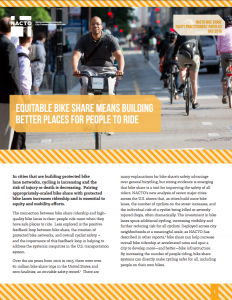 While Portland celebrates a strong first day for Biketown, a new report about the factors that drive growth in bike sharing shows how Portland has fallen behind the leading U.S. cities in new infrastructure.

Minneapolis, New York City and San Francisco now have about 50, 20 and 15 percent more bikeways per square mile than Portland respectively, the report found. All three of those cities has seen faster bikeway growth than Portland since 2010, the year Portland passed its ambitious Bike Plan for 2030. In Minneapolis, bike infrastructure has grown three times faster.

These new figures were released Wednesday as part of a report by the National Association for City Transportation Officials, which examined the role quality bike networks play in making bike sharing safe and popular.

This article was originally submitted by Metro as a subscriber post.

Former Minneapolis Mayor R.T. Rybak praised and provoked Portland-area leaders at a forum last Friday, challenging them to work together to address growing transportation dilemmas facing Portland and metropolitan regions around the country.

Rybak, a three-term mayor from 2002 to 2014, spoke with humor, humility and bluntness at a regional leadership forum at the Oregon Convention Center, kicking off Metro’s 2018 update of its regional transportation plan. 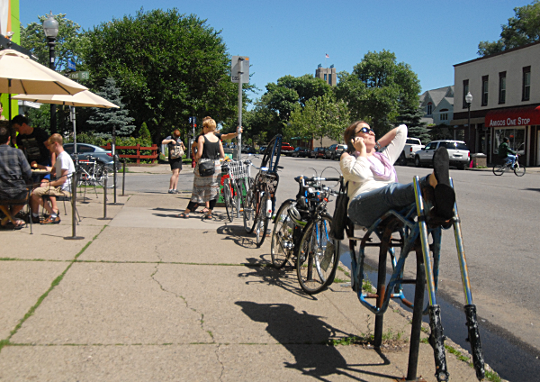 A woman lounges on the bike-frame bike rack outside Modern Times, Minneapolis’s answer to the New Deal Cafe. “Can I take a photo?” I asked. “Hell yeah,” she said.
(Photos: M.Andersen/BikePortland)

Now, don’t get me wrong: Minneapolis is a great place to ride a bicycle.

It has lots of things that Portland can and should learn from. And yes, those things they do in the November snow and the August sweat are seriously impressive. But is Minneapolis a better biking city than Portland? 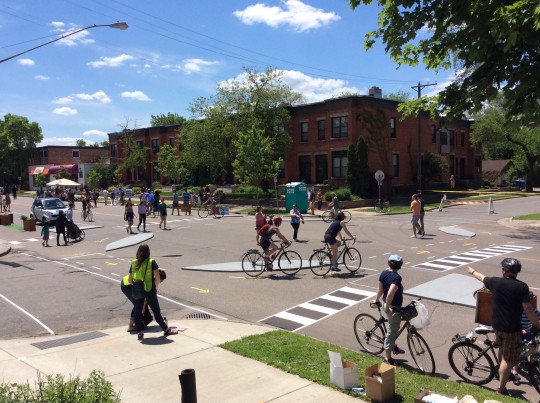 A Portland planner’s concept for a way to almost completely eliminate bike-car conflicts from American intersections got its first road test in Minneapolis this month.

“Bikeways for Everyone,” a Blue Cross Blue Shield-funded, Minneapolis-based advocacy coalition with a goal to build 30 miles of protected bike lanes by 2020, invited Nick Falbo of Alta Planning and Design to create a one-day demo at Open Streets MPLS, the city’s version of Sunday Parkways.