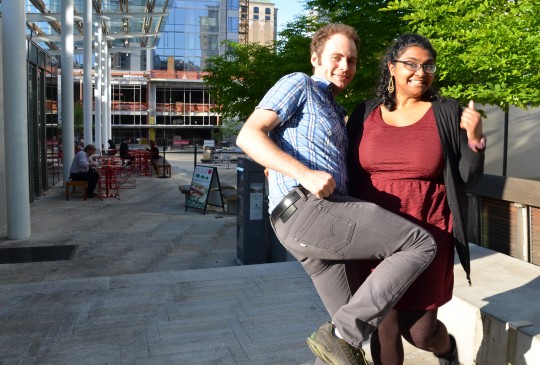 Four years after coming to Portland from New York and two years after co-founding Better Block PDX, the Kaganoviches are moving to Toronto on Monday.
(Photos: M.Andersen/BikePortland unless noted)

Boris Kaganovich was talking quickly, as he often does, when he walked past the button-activated pedestrian signal at Northeast 60th and Glisan. Without breaking stride, he slammed the heel of his hand into the button and kept walking in another direction.

The lean, curly-haired 30-year-old grinned a little too widely.

“I just hit those whenever I walk past them,” he explained cheerfully.

It was August 2014, and if Kaganovich was acting a little like a cat who had eaten the canary and gotten away with it, he could probably be forgiven.