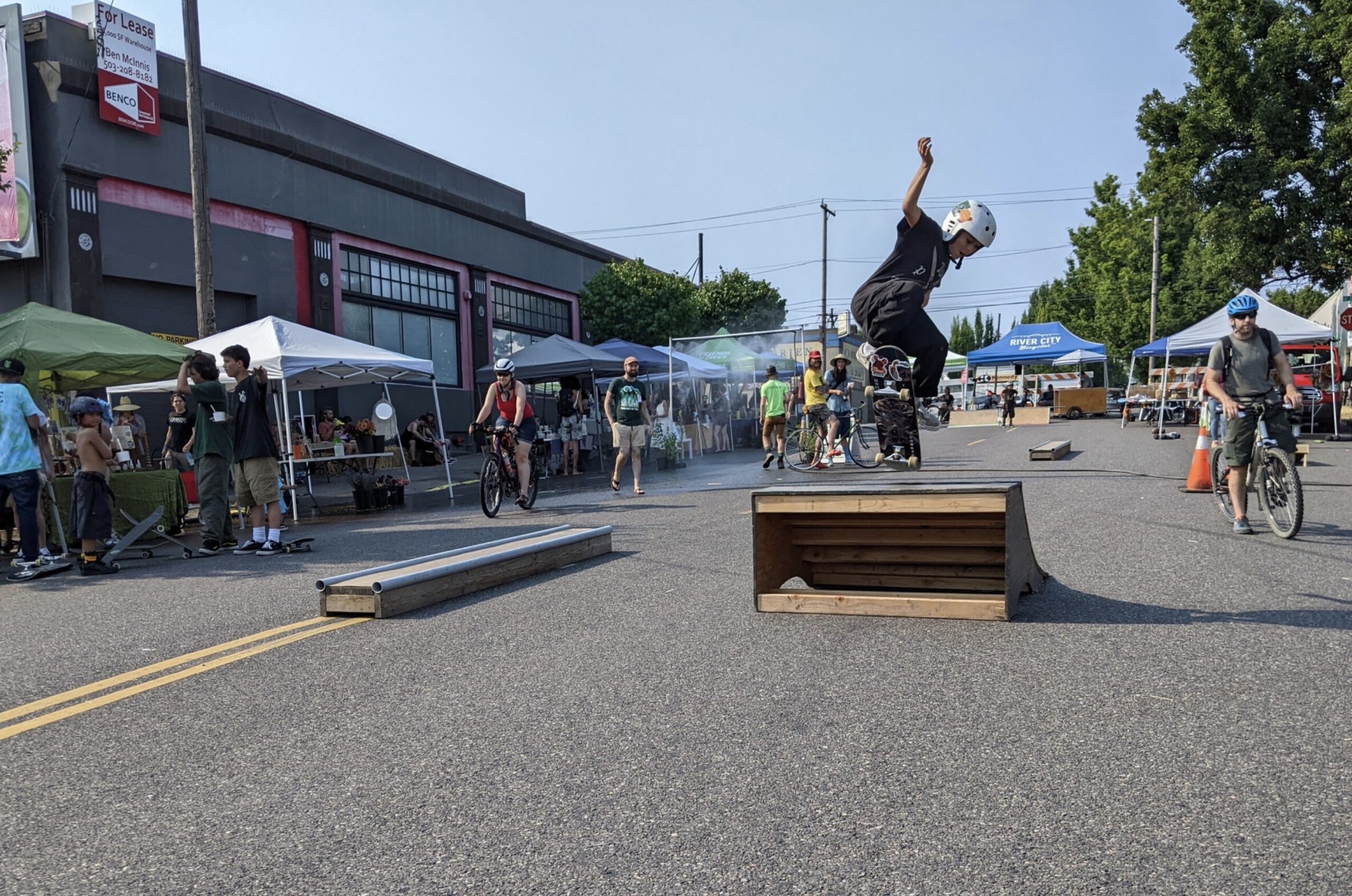 As the Blumenauer Bridge opening day events settled down, a block party was just getting going a few blocks south. Depave hosted a seven hour long block party on SE 7th Ave between Sandy Blvd and Stark Street. The event showcased how an expanse of underused city street can be reinvented as a community space. From the turnout, I would call the party — and the plan that inspired it — a huge success.

The party kicked off with local band Ten Spiders Band performing a rendition of Joni Mitchell’s “Big Yellow Taxi.” The lyrics “paved paradise and put up a parking lot” echoed with beautiful irony of the multiple vacant parking lots flanking the closed-off 7th Ave. Just imagine how this mostly-forgotten land could benefit our community and the Central Eastside!

People poured into the block party to check out the sights. The cornhole, skateboard ramps, vendors, free ice cream, beer, bands performing under shade and ride-through misters attracted people from all walks of life. Even houseless residents came to join the festivities, cool off, and access resources. Katherine Rose, Depave’s communication and engagement coordinator, mentioned that “our misters and shade structures are actually providing an oasis in a part of town that doesn’t have other cooling centers set up.” This block party showcased some of Portland’s highest values: imagination and community.

Ted Labbe, a Depave senior board member, mentioned that the project PBOT plans to begin construction on this week in the area are only the beginning.

Depave is partnering with the city to create a new public space on SE 7th Ave between Stark and Sandy. All three proposed design options increase the urban canopy, greenspace, and prioritize the safety of pedestrians and cyclists in this area.

Below is a look at current conditions compared to Option 1, the cul-de-sac:

Rose said that Commissioner Mapps and Chris Warner, the director of PBOT, visited the block party to look at Depave’s design concept. The focal point of the block party was to inform as many people as possible about the redesign concept. I asked Dylan Rivera, PBOT’s public information officer, what people can do to help the city make projects like this a priority. “Make your voice heard when an opportunity like this comes up,” he said.

Well, there just so happens to be a survey to share what you think about this proposal.

As the sun began to set on the block party, people had gotten on top of the vacant building abutting 7th Ave to enjoy the view from above. The skaters had stopped traffic on Sandy to let one of their finest accelerate downhill on 7th and jump over a barricade. When he stuck the landing, people from across the block cheered and applauded. It inspires hope to see how closing a city block to car traffic and bringing in a few vendors and games can inspire so many to see a new possibility.

As I was rolling away from the party I overheard a quick conversation. “What is going on?” a couple approaching the party asked.

“It’s a block party for the celebration of the new bridge. But they want to put some green space in here” a woman replied.

“That would be great! It’s just what this area needs.”

Filling the asphalt expanse of SE 7th Ave with people made this section of inner southeast Portland feel alive. But the “For Lease” signs, boarded up windows, and graffiti on the surrounding buildings reminded me that this event was only temporary. The Central Eastside needs a permanent community space to bring life back to these blocks of underused buildings and street space. If you think this is a good place for it, make sure to let them know via the survey. 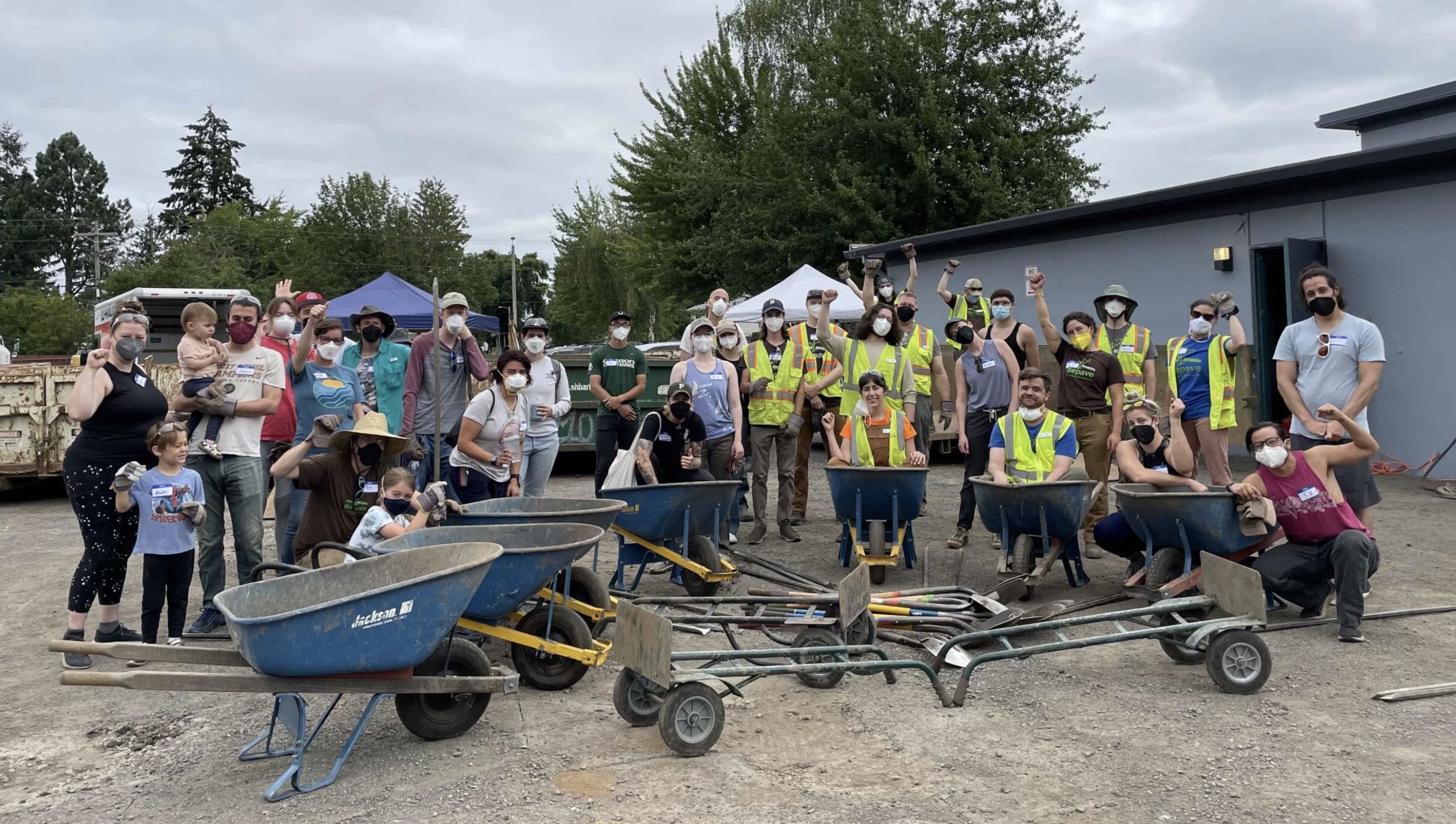 It is endlessly hot in Portland this week. Due to the ‘urban heat island effect’, some areas of the region will be hotter than others. A lack of tree canopy and large expanses of concrete and asphalt are to blame for this imbalance of heat.

Communities like Lents, where temperatures hit 124 degrees during the June 2021 heat wave, need relief. Unfortunately, it takes decades for a budding tree canopy to provide this relief. So what can we do to bring cooling relief to the disproportionately hotter areas of the region?

We can remove asphalt.

Portland based nonprofit Depave is in the business of turning ‘parking lots to paradise.’ Since its inception in 2008, the organization has completed 70 depaving projects. In a process board member Lisa Huntington describes as a barn raising in reverse, Depave brings the community together to invest their time and energy to remove an underused area of asphalt. In its place, spaces can come alive with plants, people or both.

“We hope that people start looking at pavement as an opportunity to be something else,” Huntington shared at a recent event.

I joined 35 other volunteers to depave 7,000 square feet of asphalt at East Portland’s Patrick Lynch Elementary a few weekends ago. What was once an expanse of asphalt will be transformed into an educational and community destination. Depave Communication and Engagement Coordinator Katherine Rose said the transformed site will have, “a labyrinth, outdoor classroom space, a rain garden, and lots of other assets that will be really helpful for the students and beneficial to the whole community.” Check out some before and after photos of the work below.

Depave volunteer crew leaders provided guidance, training, and a pre-work stretch clinic. During the hearty lunch of tacos, I spoke with a few first time volunteers about their experience. Doug, a first time volunteer, shared that he was depaving because he believes building community leads to a stronger and friendlier world. “I’m all for helping out. It feels really good to be working as a team.”

I saw folks who had just met work together like they were close friends. People made silly jokes to their new companions while working to fill wheelbarrows with countless pounds of fossil fuel based asphalt. The work itself was tiring and everyone got ridiculously dirty. At the end of the day I saw many leave with a big smile on their face – the truest sign of a healthy community working toward a shared goal.

Portland’s Depave organization is known for their work in community engagement. The Depave Network has blossomed many similar depaving organizations around the globe with many more in the works. Mary Pat McGuire, a Chicagoan who is looking to start a Depave Chicago branch, was in attendance to see how Portland puts on a depaving event. Her biggest takeaway: “The collaboration and coordination that everybody had today was awesome!”

Depave’s next depaving event is not until October. But, as we reported last week, they are hosting a block party this Sunday as part of the Blumenauer Bridge opening events. This block party is to showcase how the intersection of SE 7th and Sandy can be made into a community space.

Asphalt covers so much of our city. As our urban canopy continues to dwindle away and as summers get hotter, it is up to the community to decide that there are better uses for our parking lots and paved places. It is beyond time to free more of Portland’s soil from the hot and suffocating burden of this fossil fuel product.