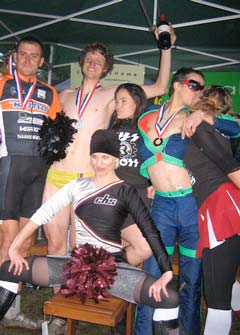 If you’re curious what you missed, the photo at right should give you a clue. Then there’s this snip from the official press release put out by the Oregon Bicycle Racing Association (OBRA):

“What happens when you combine a World Championship event, 6 kegs of PBR, a limitless supply of Oregon made microbrews, 110 men and 30 women, a heckling contest, a Tequila shortcut and a golden Speedo? You get the Single Speed Cyclocross World Championships (SSCXWC) in Portland, Oregon. What else? 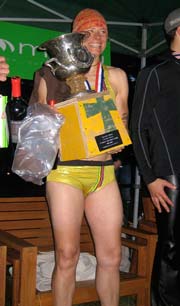 As for the racing action, the Championship was fittingly decided by a beer. According to OBRA, with a lead going into the final hundred meters, Team Giant rider Adam Craig stopped to chug a beer, only to let Oregon native Barry Wicks sneak by.

In true Portland fashion, the racing clearly took a back seat to having fun. Bikini-clad spectators, massive crowds, costumes. Awesome. Next year I won’t miss it.

For a full report of the event and official results, download OBRA’s press release (PDF).

The tequila shortcut was perhaps one of the most deftly orchestrated dipsomaniacal deviations I have ever witnessed in a sporting event. It was so tumultuos as to scare off the meeker contestants, yet when a brave soul ventured into the chaos it became a fluid pit stop worthy of Nascar. I do believe I saw Ryan Treborn take 3 shots without spilling a drop or rolling to a stop. Cheers to the tequila team! And did anyone mention that the course went directly through a predetermined dodgeball court! It took some balls to create this hazard, and in comparison, the sand trap\’s a walk in the park. Pardon the puns.

man i\’d hammer for the prize in the middle.. hehe

You should have seen the \”prize\” in the woods….check out the race pictures…
We missed you Jonathan, it was a lot of fun, the crowd was the best ever and even for us just regulars they were going nuts on the hill and in the bowl, great course and an awesome spirit for the race.
Next year….

Regrettably? Yeah. This is the first thing I\’ve, um … read that makes me want to race cyclocross.

Being a messenger here in portland and participating in many races and events as one this has to be on of the closest things to a messenger event i have ever been to.