In 1896 Portland had a thriving cycling culture complete with bike-specific fashion purveyors, bike-friendly restaurants, bike shops, and local businesses hoping to cater to our many “wheelmen” and women.


For years now I’ve let my mind wander 122 years into history thanks to the Cyclist’s Road Map of Portland District that hangs from the wall in my kitchen. The Vintage Portland blog posted an image of the map this morning and it reminded me that I’m overdue in giving this map its due here on the BikePortland Front Page. I’ve mentioned it a few times over the years, but it warrants a closer look. 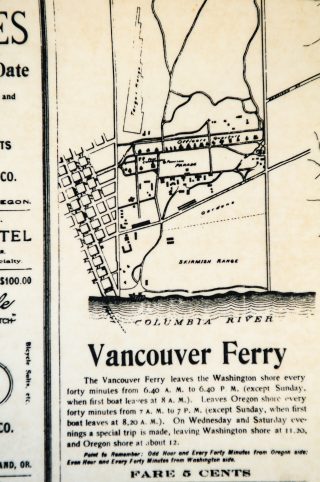 The map, which cost 50 cents in its day, was published in May 1896 by Cunningham & Banks based on data compiled by civil engineer J.H. Cunningham. To give it more credibility, the map was adopted by the Multnomah Wheelmen, a riding club with a cool logo that featured an “M” with wings.

The boundaries were St. Helens to the north, the Sandy River to the east, Forest Grove to the West, and Oregon City to the south. In an effort to help riders gauge distance, concentric circles were drawn at one-mile increments from downtown Portland. There’s also an inset map (at right) of the Vancouver Ferry which promised rides (for five cents) between Oregon and Washington every 40 minutes most weekdays.

A quick look at the map and you’ll notice many of the streets we still use today. Keep in mind this was 1896. Most of the roads in the region were still unpaved and our streetcar network was in the middle of its lifespan. One thing I love about this map is that pre-dates automobiles. The first car dealership in America didn’t open until 1898 and my cursory research tells me Portland didn’t get one until the early teens of the next century.

This is great proof that — as our friend and award-winning journalist Carlton Reid has so exhaustively documented — roads were not built for cars.

Beyond lines on a map, one value of this artifact is the window it provides into the cycling culture of the time. The map’s legend, the information and “pointers”, and advertisements are a ton of fun.

The legend offered three levels of roadway conditions: good, fair and poor. The only thing deemed important enough to have its own symbol on the map was the location of taverns. 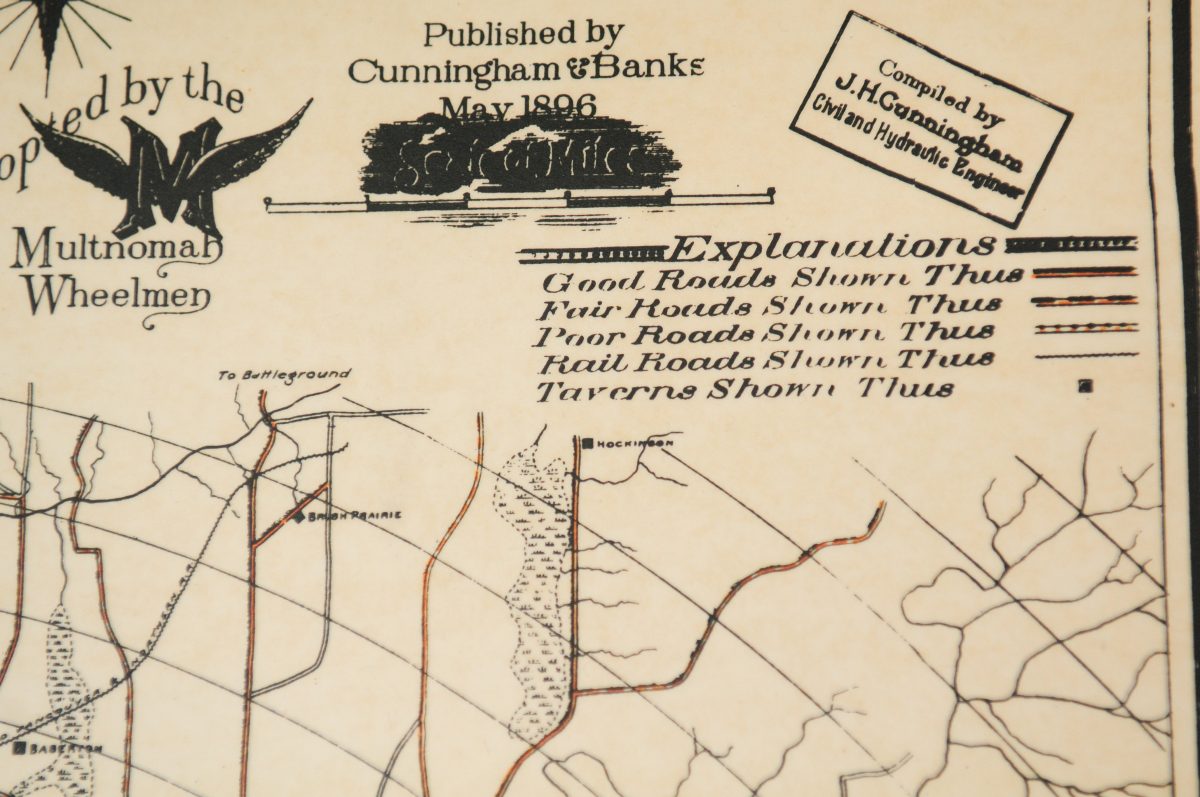 On the right side are two boxes of text titled, “Information for Wheelmen” and “Pointers.” 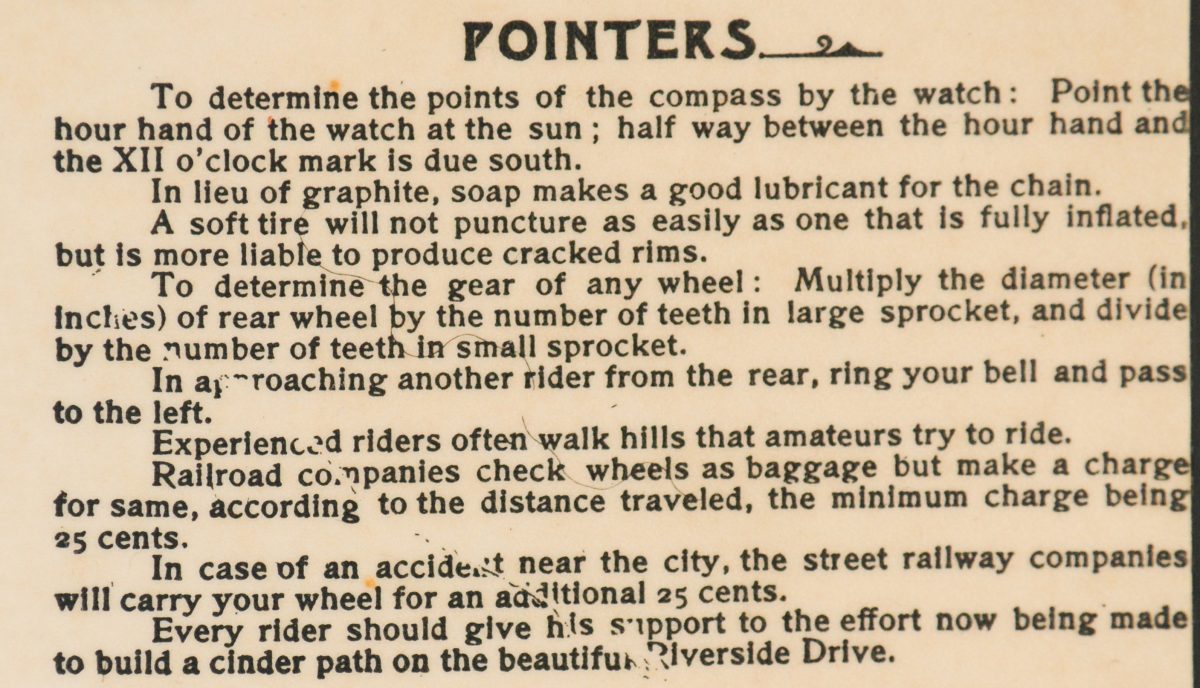 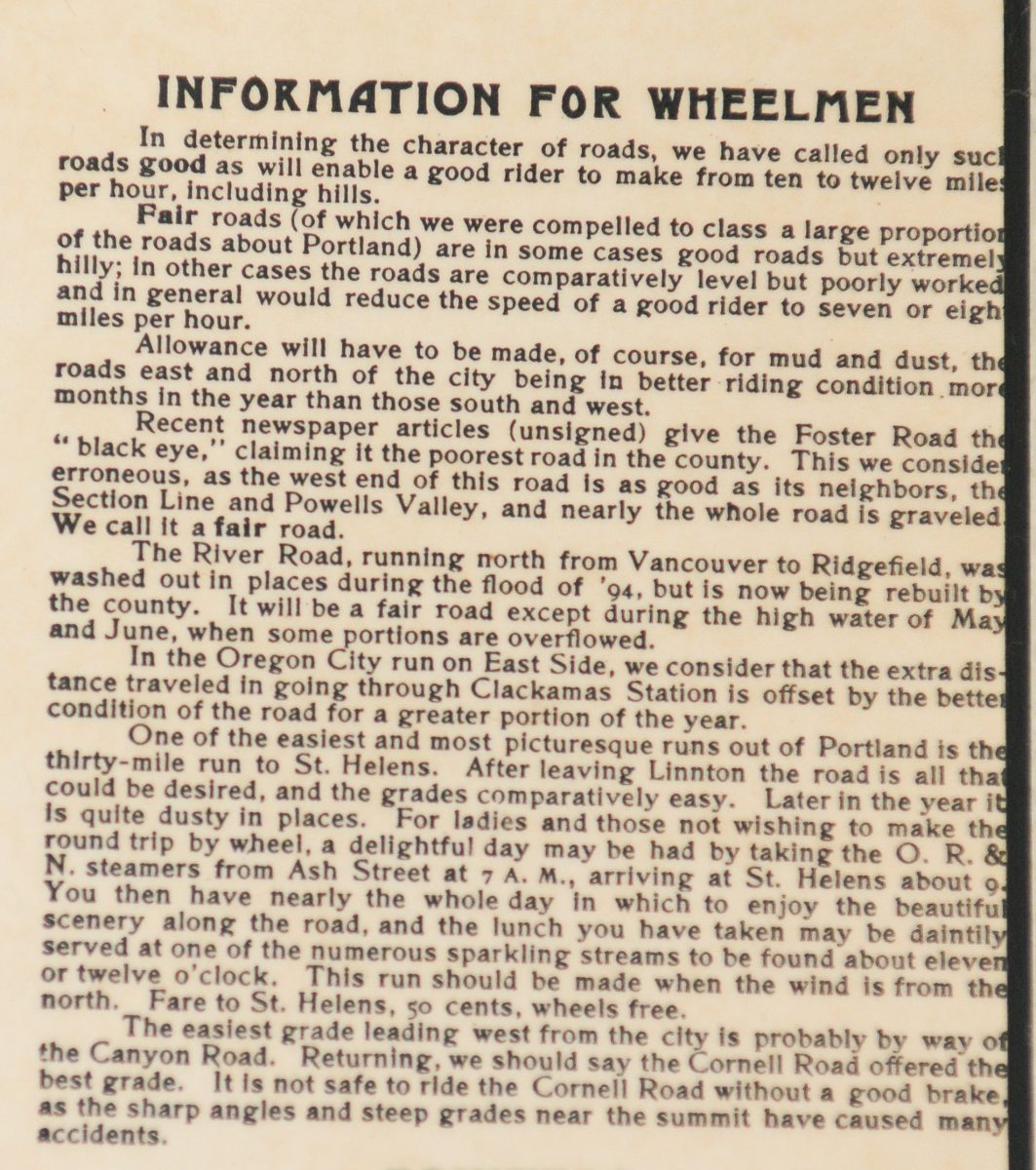 Allowance will have to be made, of course, for mud and dust, the roads east and north of the city being in better at riding condition more months in the year then those south and west.

Recent newspaper articles give the Foster Road the “black eye,” claiming it the poorest road in the county. This we consider erroneous, as the west end of this road is as good as it neighbors…

One of the easiest and most picturesque runs out of Portland is the 3 mile run to St. Helens. After leaving Linton the road is all that could be desired, and the grades comparatively easy. Later in the year it is quite dusty in places. For ladies and those not wishing to make the round-trip by wheel, a delightful day maybe had by taking the O. R. & N Steamers from Ash Street at 7:00 a.m., arriving at Saint Helens around 9. You then have nearly the whole day in which to enjoy the beautiful scenery along the road, and a lunch you have taken may be daintily served at one of the numerous sparkling streams to be found… This run should be made when the wind is from the north. Fare to St. Helens, 50 cents, wheels free.

The easiest grade leaving west from the city is probably by way of the Canyon Road. Returning, we should say the Cornell Road offered the best grade. It is not safe to ride the Cornell Road without a good break, as the sharp angles and steep grades near the summit have caused many accidents.

In lieu of graphite, soap makes a good lubricant for the chain.

A soft tire will not puncture as easily as one that is fully inflated, but is more liable to produce a cracked rim.

A few basic points on riding etiquette and style:

In approaching another rider from the rear, ring your bell and pass to the left.

A call-to-action for advocacy:

Every writer should get his support for the effort now been made to build a cinder path on the beautiful Riverside Drive.

And we even see that the bike-transit connection was alive and well back then:

In case of an accident near the city, the street railway companies will carry your wheel for an additional 25 cents. 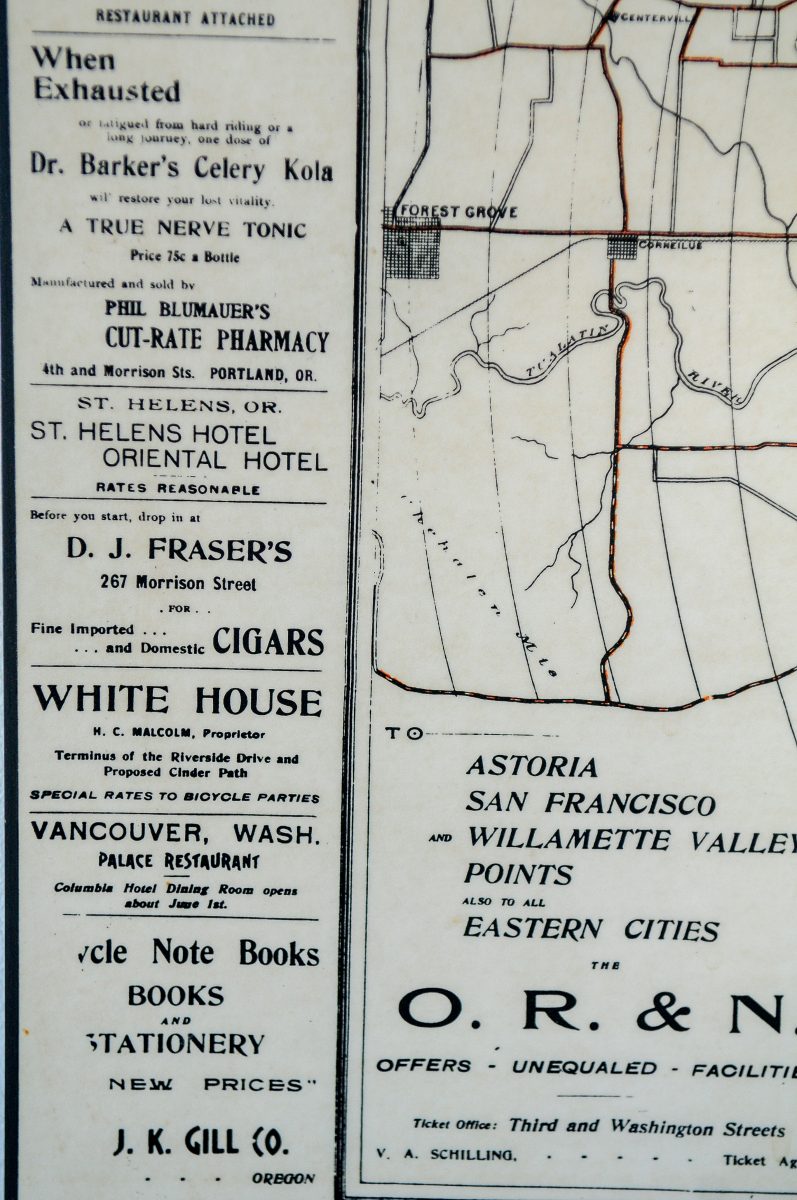 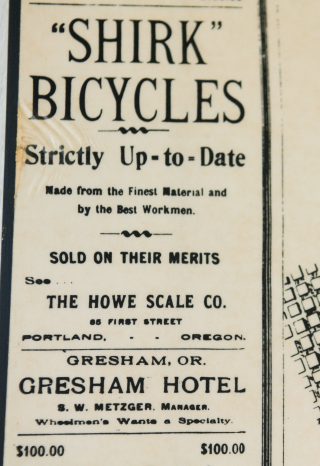 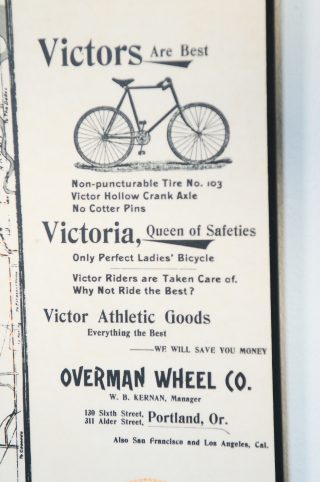 The advertisements illustrate that Portland business owners saw an opportunity to cash in on the cycling craze. A pharmacy on SW 4th and Morrison touted a product called Dr. Barker’s Celery Kola that, for 75 cents a bottle, would, “restore lost vitality” if you were “exhausted or fatigued from hard riding.”

A cigar shop at 267 SW Morrison encouraged riders to drop in for a pre-ride smoke.

The Overman Wheel Co. (which had two Portland locations) promoted their Victor brand of bicycles that came with “non-puncturable” tires, cotterless cranks and a hollow crank axle.

I wish I had a bunch of copies to sell; but I’m not even sure where you can one get these days. Years ago you could get one from the Oregon Historical Society store; but I haven’t seen it on there for a long time. The Street Trust also used to sell copies.

I love so much about this map. It proves our roads were not built for cars and that there’s been a strong cycling community in Portland for well over 100 years.

And don’t you just pine for the days when Highway 30 to St. Helens was nice and peaceful and you could hop on a “steamer” ship to get back to downtown after lunch next to a stream?!

When did Shirk Bicycles become PBOT?

What are the orange-marked streets and roads?

Those were BTA membership incentives for years. We had a huge stack but I never could find them after we moved. Somebody’s got ‘em I’m sure!

Thanks for chiming in Carl. Would love to find a good source. A few years ago I emailed with Oregon Hist. Society a few times in hopes of partnering with them on a high-resolution digital version. I lost touch with them about the project but maybe it’s worth going after again!

I have a stack if anyone is interested. $5 each 🙂

Would love one! Email me, mynameabove[at]gmail.com and we can make arrangements for payment & pickup.

B. Carfree
Reply to  Jen

I’d like four, one for me and three as gifts, if possible. Please email me so I can arrange payment and all that. hmnpwr (at) yahoo dot com. Thanks so much.

I’d love to buy 4 if you still have some! Can you email me at Info@leftcoastbicycles.com?

I would love one too! My email is also name above at gmail dot com. Thanks!

Jen, I would be interested as well if you have one left. jasonthelee (at) hotmail.com

I’d love to purchase 2 if they are still available. Can you email me. scotthoe@clackamas.us

wait…. your stack didn’t happen to originate from the old BTA office, did it? (see Carl’s comment below)

Hi I’d love a copy please email me @ antonio.victor@yahoo.com Thanks!

Obviously should have just put my contact info here: bike-central at bike-central dot com
These did not come from the BTA office 🙂

thanks, Jen! I have not been into Bike Central since I used to work down on second ave nearby. Is your shop still in the same location?

Sadly, no. Downtown got a little too crazy for us 🙂

If you cannot get one of your own, you can ride to Taco Pedaler on NE Broadway and admire the one on the wall. Appropriate for a business that started life as a “bike” food cart.

Got a good laugh at the discussion on Foster Rd. being a potential “black eye” of the 1896 network! The makers of the map eventually deemed it “fair” though.

Love the legend that shows the quality of the road and the location of taverns.

Imagine, back in 1896 nearly the entire city would be considered prime dirt/gravel /mountainbiking by todays standards with zero cars to threaten the cyclists safety. Something we now drive dozens of miles on nasty highways in our petro jalopies to get to for recreation, was a place for everyday travel back in the day. Wow, who says the good old days are not so good.

I mean, you could enjoy the dirt/gravel, just watch out for horse droppings. Oh, and this is assuming you weren’t crippled from Polio, or died from the flu, pandemic fevers, etc, etc.

Pat Lowell
Reply to  Chris I

YOU HAVE DIED OF DYSENTERY

The Vintage Portland site has the full map in higher resolution as well:

Just FYI that image cuts off the entire right margin of the map!

I love this so much and would buy at least one, maybe more as gifts, if they were commercially available.

Taking a look at the full map – Tigard used to be called Tigardville?? Amazing.

And Sherwood used to be called Smockville. Crazy Times

And, of course, Lake Oswego is Sucker Lake.

“A quick look at the map and you’ll notice many of the streets we still use today.”

I love the plea to pave Riverside Drive, aka Hwy 43. It’s not a place you want to cycle today.

Looks like a couple good costume suggestions for Tweed Ride.

Jonathan, I recall an earlier article about that piece of history. Might be fun to overlay the modern map, including proposed extensions and projects currently in the pipeline. This especially applies to connections to points north, south, east, and west. It might provide some insight to how much of that vintage network could still be viable today (and in the future, like the long dreamed of east and west extensions of the Springwater Trail).

The Oregon Historical Society used to print them (my memory). I always loved that map.

For those interested in learning more about cycling back in the NW then…read: Two Wheels North Cycling the West Coast in 1909….imaging having to cut large tree limbs and dragging them in order to slow one’s speed on steep hills with primitive brakes and wood rim wheels.

B. Carfree
Reply to  todd boulanger

I remember three decades back the Sacramento Bee put a few pages of an older touring journal in its sports section. I was astounded at the notion of carrying a chain in order to be able to attach logs for long descents, but on an ordinary it does make sense. Fun stuff.

Like with a lot of things (modern medicine, communications, breweries), our current cycling tools and toys make me rather pleased with the historical period I was born into. We’ve really got it good, all things considered.

And then there’s the California version, a bit older and almost as cool.

Among the pointers that remain relevant: ‘ring your bell and pass to the left’.

Ah, now I have justification when I claim to be a cycling “expert”!

I love this map. Had it hanging on my office wall for many years. I suspect it originated from the BTA stash at one point?

If you are going to post an image, please post original map images. Like the one held by the City of Portland Archives. This image is clearly of the printed version and copyright is held by the Oregon Historical Society.