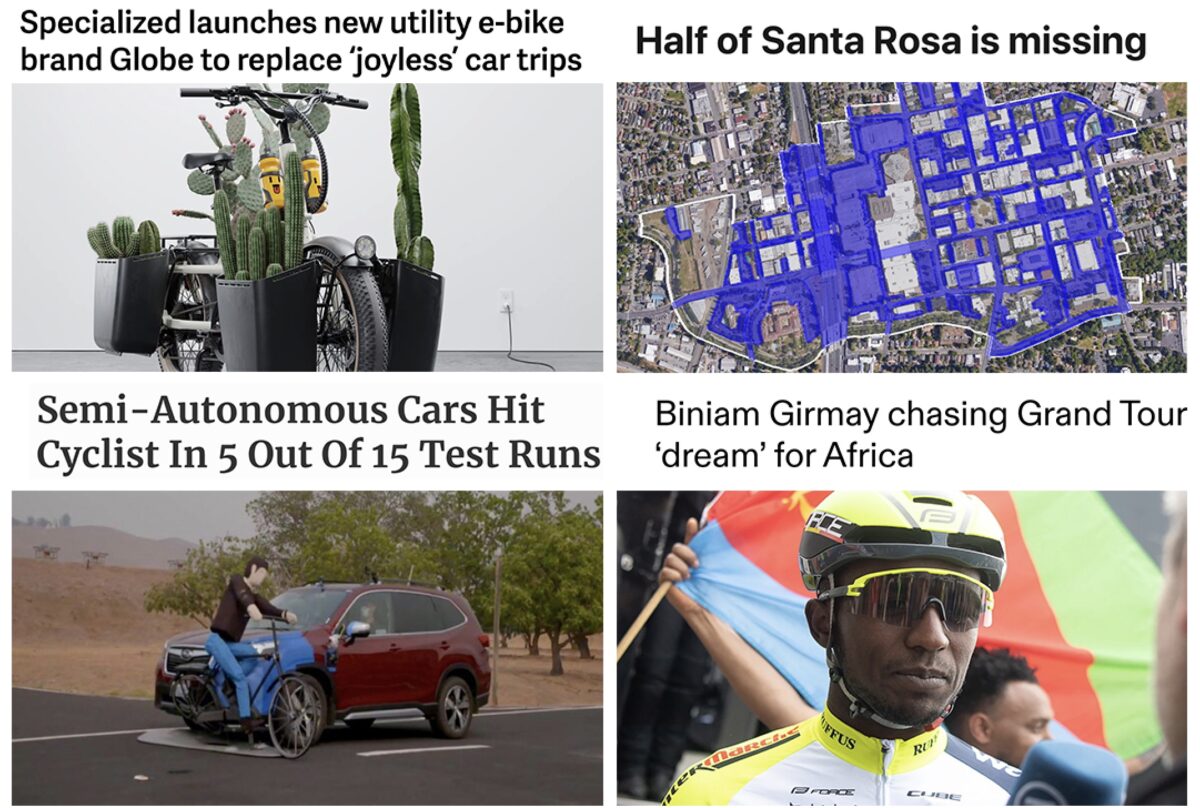 Here are the most notable items our editors and readers came across in the past seven days.

Big “S” and a big e: Specialized is bringing back their “Globe” brand as a utility electric-bike aimed specifically at replacing cars.

A car city: Almost half of the entire area of downtown Santa Rosa, California is devoted to car usage or storage.

Blinder blindspots: A study by driving advocacy group AAA found that semi-autonomous cars hit bicycle riders crossing in front of them one-third of the time.

Gravel in WaPo: “Gravel” riding continues its ascent into the mainstream with a primer in the Washington Post — and a route resource group based in Bend gets a mention!

Ban on “squat” trucks: Interesting news from South Carolina where lawmakers have banned a certain type of lift on trucks due to safety concerns.

Outdoor riding is back: Just weeks after a massive sell-off of Peloton stocks, indoor riding company Zwift has also announced layoffs and shrinking ambitions as people ditch the basement for fresh air and real roads.

A win for Africa: A professional cyclist from Eritrea is very close to realizing his dream of being the first Black rider to win a stage at a Grand Tour.

Re: “Almost half of the entire area of downtown San Jose, California is devoted to car usage or storage.”
That is also true, I suspect, but the linked article is about Santa Rosa, not San Jose. https://adriancovert.substack.com/p/half-of-santa-rosa-is-missing?s=r

Thanks Joseph. Fixed that error. Someday we’ll have a proofreader. Until then, those little buggers still sneak by.

I emailed you to offer pro-bono proofreading on two separate occasions. I received no reply either time. I assumed that meant you didn’t care.

Hmm that doesn’t ring a bell Matt. I bet the emails went into spam or something. I’ll check. Thanks for the offer!

Santa Rosa, not San Jose for the second story. ( But I’m very familiar with San Jose, and the same observations are pretty much valid there as well. )

Shoutout to Biniam Girmay, and also shoutout to Intermarche Wanty-Gobert, they have had a really stellar year so far. Sending Biniam to the right races and having a good supporting team makes a big difference. I think for the flatter stages at the end of the Giro he’s got a good shot for stage or two once Ewan, Cav and the other pure sprinters have dropped out

Yes, exciting to see him and Van Der Poel going head to head so often during the Giro!

Agreed. I encourage everyone to find highlights from today’s epic finish (stage 10).

Case in point! Epic finish. Also thanks for not spoiling – I actually saw your post before catching the replay!

Great news about Specialized but I am just baffled by the cacti as cargo. Looks like it would be terrifying to ride that bike.

This reminds me of learning about Tennessee’s ban on window tinting, when I was growing up. I had the distinct impression that the purpose of the ban was not so much to address a safety concern, but rather to penalize Black people, because they were more likely to have a car with tinted windows. Looking back, it might have been a move to penalize a behavior that allowed Black people to somewhat mitigate their risk of being pulled over by police (“driving while Black”).

I didn’t see any demographic statistics about squat truck owners in the article, but subsequent online sleuthing suggests that at least some Black people do like these kinds of vehicles. It could be that these are coded as a Black thing.

I wonder if the South Carolina legislature would be more favorable to such a ban than a similar ban, say, on the high-hooded monster trucks that have taken over our roads. These trucks come straight from the manufacturer with the same kind of safety concerns. . . but appear to be quite popular with white male drivers.