The Monday Roundup: How to save cities from cars, Sea Otter goodies, family biking, and more 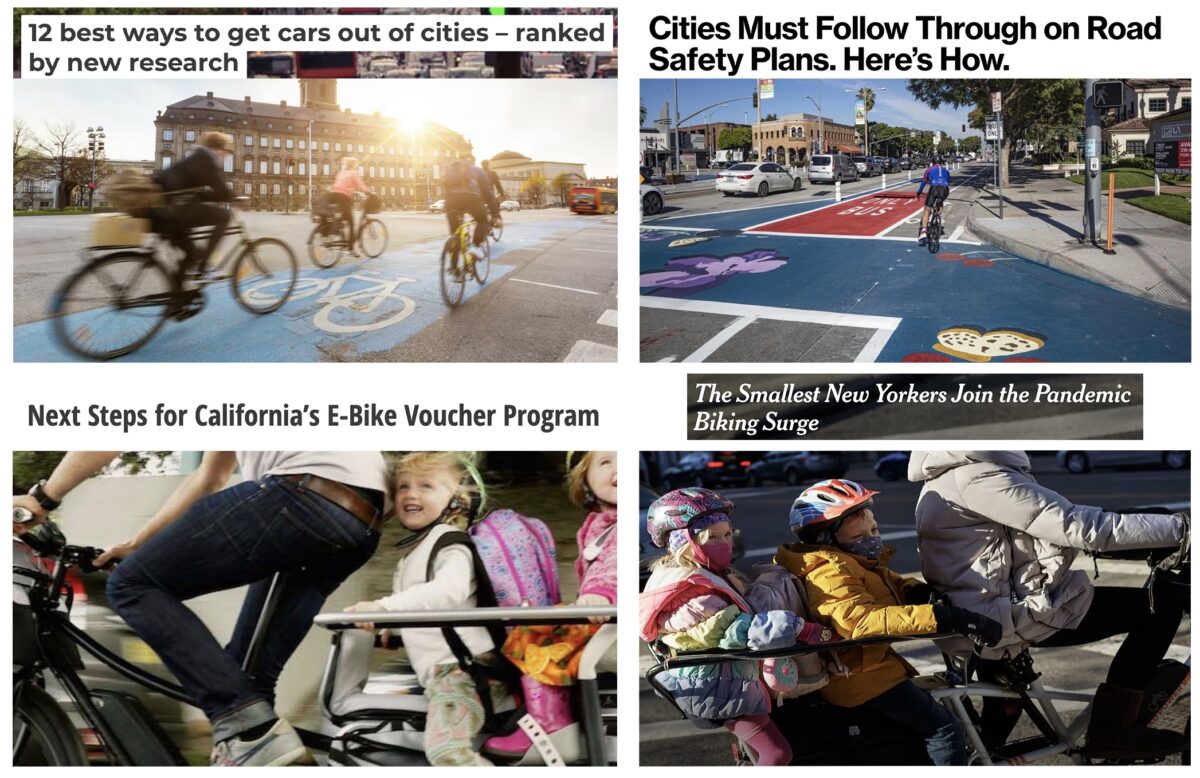 Welcome to the week. Here are the most notable items our writers and readers came across in the past seven days…

How-to guide for our future: Results of new research that screened nearly 800 peer-reviewed reports and studies to find the top 12 ways to reduce car use in cities, found the best methods are to introduce a congestion charge and create carfree streets and separated bike lanes.

Houses for people, not cars: This article about how to make housing cheaper to build in Portland says one of the key methods is to improve biking and transit.

How green are e-cars? Streetsblog looks at a new study that shows electric car purchase incentives might actually lead to more emissions when they are used primarily by wealthier people who don’t drive their e-cars enough to outweigh emissions from their primary gas-guzzler.

Don’t plan about it, be about it: A group in Los Angeles is so frustrated with that city’s lack of implementation of its Mobility Plan they are pushing for a citywide referendum that would require city government to build it out more quickly.

Sea Otter goodies: Sea Otter, recently held in Monterey, California, has become one of the biggest product launch events of the year. Check out this sampling of the cool goodies that caught the eyes of Road.cc.

E-bike incentives: California bike advocates have $10 million burning a hole in their pocket for a new e-bike purchase voucher program that will be aimed at reducing car trips and increasing mobility for low-income residents.

New carfree bridge: If you’re looking for a new adventure this summer, check out the Palouse to Cascades State Park Trail in eastern Washington which now boasts a carfree bridge over the Columbia River.

The e-bike revolution continues: One bike industry insider says the rise of e-bikes and fall of retail bike shops might actually impact the quality of bikes being sold by encouraging direct-to-consumer brands to invest in higher-quality parts that need a lot less maintenance.

E-cargo family bikes: A trend seen in Portland for years is also being noticed in New York City and the NY Times says “the smallest New Yorkers have joined the pandemic biking surge.”

Frog Ferry flops: The dream of Willamette River ferry service between Vancouver and OMSI is all but dead after Portland City Council voted against ongoing funding for the Frog Ferry project and an ugly financial dispute with TriMet hit the headlines.

Thanks to everyone who sent in links this week!

The Frog Ferry was a terrible idea, so I consider this good news. We minimized the waste early-on. Also, it looks like the person running the non-profit was skimming a lot of money. $200 per hour?

From the piece about housing costs authored by a Sightline sponsored writer:

If we want Portland homes to cost less, either to buy or rent, we need it to be less expensive to create a new home or apartment.

Right now, you can’t find a new, three-bedroom house in Portland for much less than $600,000, because that’s how much it costs to finance, build and sell a three-bedroom house. As long as that’s true, the price of a quaint, drafty midcentury bungalow won’t be much lower.

It isn’t true. If housing costs less to build, why would a developer sell/rent it for less if people are willing to pay more? Lower costs = more profit, not lower prices.

*They don’t. They support a small amount of additional Mini-McMansion infill and ADU AirBnB units that preserve residential neighborhoods as exclusive enclaves for the wealthy (and the few remaining people who bought before “houses” started appreciating at 20%+ per year).

The way they present things feels much more ideological than intellectual. Like I’m being sold on a vision rather than offered the facts, persuaded rather an informed. #thinktanklife

Your follow-up point is probably true unto itself, but you’ve misinterpreted the passage you quoted!

Except that that price floor is not set only by rational pricing activity but also by high levels of speculation aided and abetted by billions of direct and indirect government subsidy (please challenge me on this).

Despite the damage caused the by the previous housing bubble* still reverberating throughout our communities, real-estate-mogul-funded Sightline always studiously avoids any mention that housing has become a speculative asset# that is now furiously traded by wall street. For example, 1 out of every 5 houses bought in Portland during Q3 2021 was purchased by investors, according to Redfin. And Redfin’s methodology misses most of the “mom and pop” investors (e.g. Rich Dad, Poor Dad types) who own multiple homes.

*I don’t think this “frothiness” is as severe as the last bubble (yet) so please don’t accuse me of being alarmist.

Your point that large market players contribute to pricing conditions isn’t explicitly negated in his argument, so I don’t see why you take such an adversarial stance. I see him arguing that we’ll need to improve our zoning & building requirements if we want to lower housing prices — not that it’s all we need to do, but just that it’s one step on the path there. I see you arguing that it’ll take additional steps, too: more direct financial support for low-income renters/buyers, market interventions to stop speculative purchasing, etc.

These aren’t mutually exclusive conditions, but instead of seeing a both/and situation, you always seem to think it’s an either/or?

No that’s not at all what I’m saying.

IMO, the meager financial support or modest intervention feasible under a rigged and highly-financialized market will always be insufficient. If we want to address the housing crisis, governments need to implement market-killing social-housing AND and anti-market regulation that causes prices to plummet (e.g. variations on the “communist” market interference that democratic nations with actual housing social safety nets and relatively stable housing prices have implemented).

Do I think any of this market-killing will happen in the USA any time soon — of course not.

Do I expect multiple serial housing boom-busts that will continue to increase housing inequity — abso****inglutely.

And, finally, do I expect real estate-investor funded “thinktanks” to continue to carry water for speculative real estate investors — yes.

Congrats to my home state for passing the stop sign bill, I am glad that this has seemed to gather some attention as it will hopefully lead to people becoming better educated on best practices in cycling with traffic, both as cyclists and drivers. IMO the inconsistency of cyclist behavior in shared spaces is what leads to a majority of anger and aggression from other users, and as I’ve seen first hand that anger can very much be between cyclists participating together on the very same ride.

Bicycle riders are human. Human behavior is all over the map. A person can learn very much about humans by observing the operation of motor vehicles by humans.

One interesting thing about humans is that it is possible for them to not perceive an object that is directly before their face.

Oregon’s ambiguous version of this law needs to be fixed. People rolling should be allowed to treat red signals as stop signs without having to mind-read traffic switches (so absurd).

Frog Ferry was a joke anyway. If the region’s geography and commuting patterns could support passenger ferries, we’d have had them decades ago.

Does our Idaho Stop law allow us to treat stoplights as stop signs?

no. signals are still required full stops. However, if you wait a full signal cycle and the light does not change because there is no sensor that senses your vehicle, you are able to go if it’s safe. At least I know that is the law for motorcycle riders and I do it on my bike as well (if bikes aren’t included, someone needs to clean up that law to explicitly add them!).

No. But if you are on a bike and wait a full signal cycle and the signal fails to sense your vehicle and doesn’t turn, you can go when it’s safe. I know that’s the law for motorcycle riders and I’m pretty sure it applies to bikes as well. If not, it needs to be changed so it does.