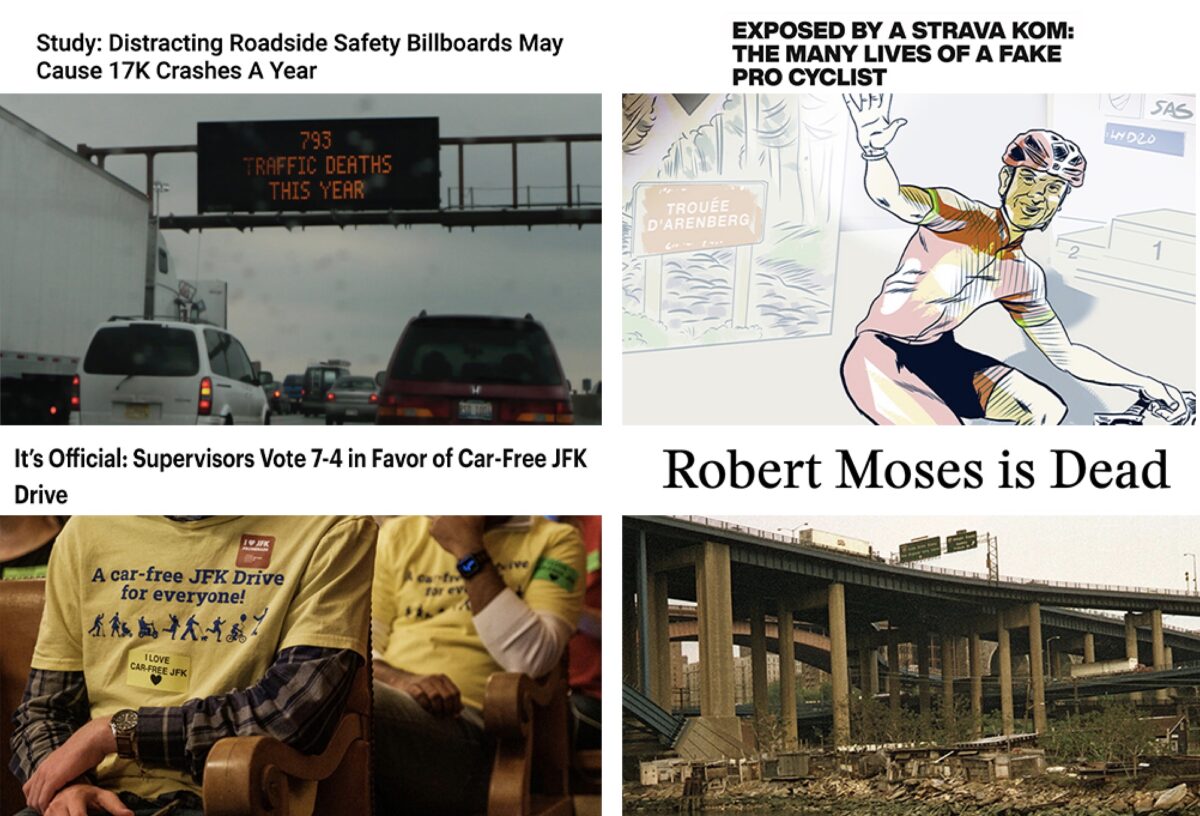 “The people are assets”: An excellent piece this week in The Baffler connects Robert Moses to Pete Buttigieg and warns how even well-intentioned planners can go wrong when they value place over people.

Let it be carfree: Massive victory for human beings in San Francisco after their Board of Supervisors voted to keep JFK Drive free of car drivers forever!

It was all a lie: Fascinating story about a local racing legend who built a huge following in Virginia but turned out to be a total fraud when questions arose via his Strava results.

A new dawn: US DOT Sec Pete Buttigieg has set into motion a federal rulemaking process that could lead to new regulations on vehicle size, safety ratings, and so on.

Oh the irony: I love when a report validates a pet peeve I’ve had for years. In this case it’s about how overuse of cars leads to traffic which gets in the way of emergency response vehicles. To top it off, it’s often emergency agencies like fire departments who oppose infrastructure changes that would reduce car use!

Behind the curtain: Don’t miss the latest episode of The War on Cars as two of the hosts go behind enemy lines into the New York Auto Show.

Bike warrior: Klay Thompson, a big-time NBA star for the Golden State Warriors, showed up to a playoff game at San Francisco’s Chase Center on his bike like a boss.

Who rules transit?: It’s “elite projection” (to coin a phrase from Jarrett Walker) and racial/social injustice all wrapped up into one when we look at a new report from Transit Center that shows the extent to which most transit boards do not reflect actual ridership.

When “safety” distracts: Interesting research from Texas shows that those signs on freeways about crashes can actually lead to more crashes. It’s almost as if those fancy signs are more about construction contracts and job security for DOTs than actually improving safety outcomes.

It’s “elite projection” (to coin a phrase from Jarrett Walker) and racial/social injustice all wrapped up into one when we look at a new report from Transit Center that shows the extent to which most transit boards do not reflect actual ridership.

So transit boards are kinda like cycling advocacy groups?

yeah pretty much! But to their credit, the PBOT BAC has just added a bunch of new members, many of whom are not older white men so that’s a good sign.

Robert Moses built enormous amounts of social housing modeled after Courbosier’s “utopian” radiant city. These tall buildings were surrounded by greenspace and more than make up for Moses’ lamentable role in building more freeways. His legacy was complicated with great social benefit and great harm.

Jane Jacobs on the other hand has had an uniformly oppressive impact on urban life. For example, she was infamously hostile to public housing (and poor people) and strongly advocated for what we know today as gentrification. The “sidewalk ballet” of twee boutiques and cafes that Jacobs envisioned as the pinnacle of urban life is one that excludes poor people (who are disproportionately immigrants, black people, and other marginalized demographics). And it’s no surprise that supporters of Jane Jacobs helped gut many of the social housing projects that Moses designed. Nor is it a surprise that, today, many of her supporters are cheerleaders for the massive speculative real estate projects that continue to erase the last vestiges working class life in NYC and other “high demand” metro areas. The minute someone mentions Jane Jacobs I know for certain that I will be opposed to that person’s politics.

As we all know, effective advocacy must involve demonizing large swaths of potential allies in a snap judgement based on who they’ve read.

You write of “snap judgments” while also claiming that disagreeing with someone’s politics (quelle horreur) is the equivalent of “demonizing”.

Will
Reply to  soren

He also bulldozed pre-existing communities in order to build them. Moses’ developments in the Rockaways we’re not successful. They concentrated poverty and moved it to the periphery of the city – far from jobs and resources. Baldwin did not have kind things to say about Moses’ urban renewal.

soren
Reply to  Will

I would be very pleased to see pre-existing detached homes in urban centers dismantled to make room for dense human-scaled social housing. If we are to have any hope of reducing inequality (and urban GHG emissions) one important step would be to stop building the ultra-low-density housing that YIMBYs and NIMBYs prefer.

The wrong link is used on “Oh the irony:” and links to the safety billboard article instead.

Thanks. Fixed it. Here’s the link https://www.wearepossible.org/latest-news/traffic-is-holding-up-emergency-vehicles

For most Dodge buyers, a pedestrian safety rating of 1 would be a feature, rather than a bug.

Who rules transit: Most transit agencies in NC are run by general managers and agency staff; the board is a rubber-stamp body. Here in Greensboro NC our transit board is about 50% black and 60% female (and 30% black female), entirely appointed by our city council members, but they are all middle-class single-occupancy vehicle drivers who only use transit by choice, if at all. Our transit agency ignores their advice and our city council vetoes all their controversial decisions, same as all other NC cities. Is it different elsewhere?

but they are all middle-class

As you’ve often observed, David, what’s lacking on transit boards or bike advocacy committees are poor people. The fact that these influential “positions” require large chunks of time (often during working hours) and pay absolutely nothing makes them non-diverse by design. And although I agree that they largely serve as rubber stamps, they are certainly a good way to build a resume for a paid planner/non-profit/think-tank gig.

Yup, padding my resume is why I used to serve on them; now I serve on them to lobby bureaucrats. White privilege and all that…

Who rules transit? Perhaps a more significant disconnect between transit boards and ridership than superficial physical resemblance is income and occupation. Using the Portland context, being dependent on transit for odd shifts up along Columbia while the transit is focused on getting folks downtown for the morning commute may provide a very different view of what is needed to make transit work than if your central-city office job has transitioned to work-from-home.

We would benefit by having more folks from “outside the white collar bubble” on boards like TriMet.

The bizarre obsession of city leaders and TriMet with getting everyone in and out of downtown to the exclusion of any other transportation is really galling.

Of course I imagine the Portland Business Alliance has something to do with it too.

So, its likely to only get worse. The likelihood of downtown work ever returning to its heyday is slim, so the responsibility will be to move less people to more disparate locations, which likely costs much more than the current service to do so at a rate anyone will actually use.

If we had the entire board of trimet made up of “poor” people, we can likely surmise that their recommendations would be to have more service from more areas far outside the city core to other areas far outside the city core at the lowest possible cost to the rider possible. Or are there other aspects they may identify? So, then you must tell people who do not use trimet services that they must pay more to subsidize the service for those who do. Is there the political will to do that? Or would it just feel good to have those folks sitting on the board?

A pessimistic opinion which may or may not come true….
There may a backlash coming, the downtown is still per square foot the most expensive real estate in the State and letting it go down the tubes is having a real financial impact.
If the downtown is cleaned up it will come back in no time. It was only 4-5 years ago it was one of the most vibrant downtowns in the country.
We allowed .5% of the population to change that.
It is not an impossible fix.
It is still the best option to have a core area to move people to and the easiest for transit.
However, an election is in 2 weeks, electing the same people is so dumb but if the citizens here do, there will be no downtown left.

Or would it just feel good to have those folks sitting on the board?

I’m oscillating between yes, it would really help, and no, it probably wouldn’t, especially if the diversity takes the typical form of finding people who look different but think alike. I can feel my cynical self wrestling with my hopeful self as I type and edit and delete and retype.

As I’ve opined previously, I think TriMet’s model is doomed (partly for the reasons you identified in your first paragraph), and if they’re just promoting more of the same, it probably doesn’t much matter who is filling the board seats as the ship takes on water.

[Cynical self shoots and… scores!!!! It’s a great night here on BikePortland!!!]

In Portland, transit is ruled by the construction companies that have made huge profits from train lines.
You don’t honestly think Goldschmidt supported it and brought it here to help the citizens get around town do you???

Matthew in PDX
Reply to  SolarEclipse

What we need is a … `monorail.

That Nick Clark article was a ride. Got to give him credit, though. He knows how to grift the hottest trends. Spandex cycling in 2015, and assault weapons/stolen valor in 2020+.

After reading the article, I have to wonder, was Nick Clark his real name? What aliases did he have? Was he ever actually married? Are his two kids real? Was he ever from Australia or Indonesia?

One thing is for certain, he is a real scam artist. And to paraphrase Blazing Saddles, the rest of us are so… dumb…

I hear they’re renaming the Bob Stacy Bridge after him.

That fake pro cyclist story is amazing. This reminds me so much of a guy I had the misfortune of working for, a contractor with a similarly weak grasp of the truth and morality.

Concerning the mandates for safety technology. It takes a long time for the NHTSA to get things done. For example the rear view camera. It was first proposed in 2007. In 20014 they mandated that all new cars built on and after May 2018 have a backup camera. So the 2019 Model Year autos were in full compliance (12 years proposal to mandate). The one advantage is that most manufactures offer the proposed technology in most there models. But never for free, average cost to add the technology is about $2000. In 2007 very few cars had backup cameras. Say they could actually mandate this in 6 years (2029 Model Year). With the average car age at 13 years, that means by 2042 most cars will have this technology. I think with number of cars being bought now with this technology it will happen sooner. A mandate though would increase the %.