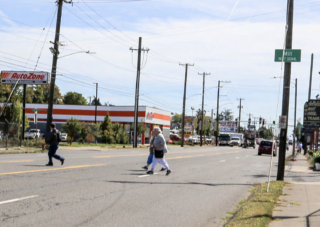 People have to put themselves in danger to cross 82nd while walking or biking because of the large crosswalk gaps. (Photo: City of Portland)

At Thursday’s Portland City Council meeting, commissioners will vote to adopt an Intergovernmental Agreement (IGA) between the Portland Bureau of Transportation and the Oregon Department of Transportation giving the City of Portland will official jurisdiction over 82nd Avenue as of June 1.

Until now, ODOT has managed 82nd Ave, a.k.a. State Route 213, and one of the most dangerous corridors in the city for all road users. The IGA is the final administrative hurdle that sets 82nd onto a future that (hopefully) looks much different than its past. 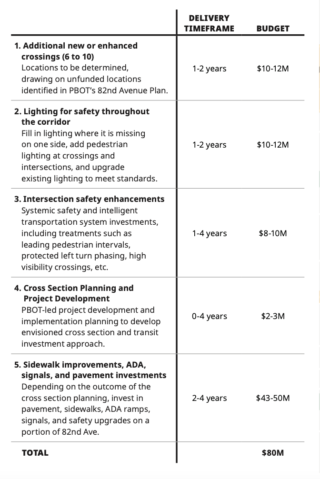 What ODOT and PBOT plan to do with the $80 million. (Photo: PBOT)

Activists have been ringing the alarm about 82nd Ave for years, and this agreement marks a big milestone in the fight to make this crucial corridor a safer place.

Last June, we reported the Oregon Legislature voted to spend $80 million in American Recovery Plan Act ARPA funds to facilitate the transfer. Preceding that, PBOT Director Chris Warner and ODOT Director Kris Strickler co-signed a letter to the legislature making a case for these funds, which gives an idea of how the two agencies have been on the same page on this issue for some time.

Along with the shift in which agency will oversee the street, Thursday’s vote will formally accept the ARPA grant so PBOT can make “safety, asset and mobility improvements” to 82nd Ave. In addition, ODOT will be providing PBOT with $70 million in other federal funds for this corridor, and the city is committing to another $35 million. In short: there’s going to be a lot of money to use on making this street safer and more accessible.

Since the ARPA money needs to be spent within five years, advocates and agency staff are under relatively tight time constraints to get the first wave of projects done. PBOT is calling this first round of spending its “Critical Fixes.”

In the IGA documents, these projects are described as “safety upgrades and multi-modal improvements” that includes things like new crossings and enhanced safety at existing one, adding enough street lighting so the entire street meets PBOT standards, speed reduction measures, updated signal timing and ensuring ADA standards on sidewalks and curb ramps are met.

Beyond the meaning this has to the community and people who’ve been fighting for a safer 82nd Ave for years, this IGA is important because it hasn’t been commonplace for ODOT and PBOT to work together in this way. IGAs are often signed for smaller projects, but a move like this on such a large corridor (and with so much money involved) is rare.

You can watch Portland City Council make this agreement official at 2:00 pm tomorrow. There is 90 minutes allotted to this ordinance, and public testimony will be accepted, which you can sign up for here.

To learn more about what the future of 82nd Avenue might look like, there’s a session at the Oregon Active Transportation Summit today hosted by Oregon Walks 82nd Ave Coalition and Project Manager Zachary Lauritzen that will share more about the transfer and will ask attendees, “to dream big and imagine what 82nd avenue could be.”

Why are these kinds of sessions always so crazy expensive? Wouldn’t you want more people to be able to join and get involved and support the movement? I’m one example of someone who is very interested in getting involved in any way possible and I want to learn as much as I can but to me, these types of events charging $250 just to join a virtual session feel elitist and turn me off from groups like Street Trust.

I’m not the one to ask because I’ve never put on a conference like this. But my feeling is that these are directed mostly at nonprofit and agency professionals whose organizations pay their way and folks who don’t get it paid for find other ways to access the content like volunteering, scholarships, begging, and so on. If you work in these fields it’s a thing where you need to show up and network and such, and that has a lot of value for these type of folks. TST might also make recordings available to the public after the fact. Also, this stuff takes a lot of time and effort and money to put on, and folks need to eat!

I would guess that ODOT is not giving up any of their share (50% of gas tax revenues) to facilitate this. one-time money is being allocated, but ODOT is essentially reducing their long-term liabilities when they do this type of transaction.

More money for this freeway-expanding org isn’t good. We should be looking to de-fund ODOT and spend all their money on these local improvements to dangerous roads. ODOT highways should be in maintenance or reduction mode only

I’d really like to see some sort of plan to reconfigure the lanes on 82nd to prioritize buses, if not also adding protected bike lanes and a wholesale widening of the sidewalks.

Safe crossing improvements are fine, but the fundamental nature of 82nd is hostile to everyone but cars. PBOT could do much more. But I assume that most of the near term state to city handover investment will in upgrading the road-base to the curb with some expensive, but in the end piecemeal or danger mitigation focused, pedestrian safety thrown in where possible.

Make the right lanes in each direction bus/bike only.
That’d reduce vehicle traffic to one lane each direction, which might discourage those that jump off I-205 to get around its slow traffic by hitting the neighborhood streets*.
Win – Win.

*Granted 82nd isn’t a “neighborhood street” in the traditional sense but I think y’all get my gist.

Where is the funding for the improvements to bus 72 that were talked about previously? Bus lanes and signal priority would make a huge difference.

This is pretty low priority in terms of safety, but I’d love to see wider sidewalks with street furniture zones all along 82nd. Newer development is doing that, but it would be nice to have sidewalks widened in front of existing buildings and used car lots, without needing to wait for every parcel to be redeveloped.

Since they’re hoping to legalize certain street professions that are currently not legal, they should build a privacy hut on each street corner, to help out the workin’ folks and their customers.
🙂
🙂
🙂