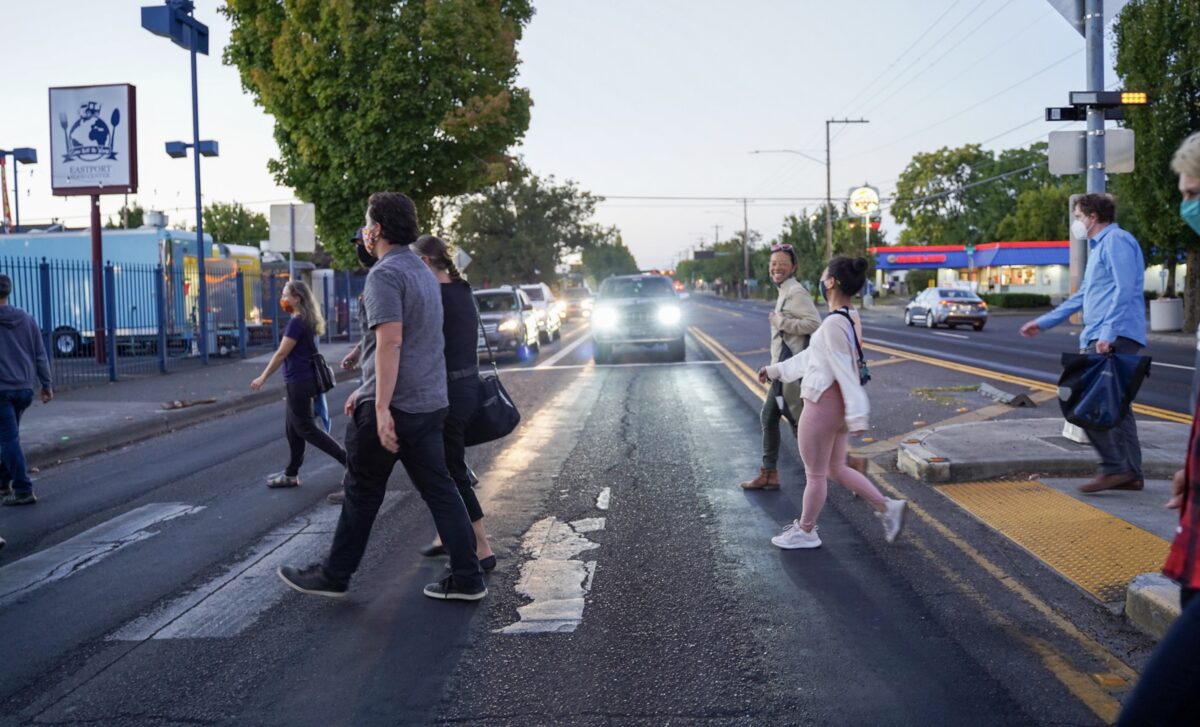 A slew of safer crossings on 82nd Avenue are expected to be constructed next year.
(Photo: Jonathan Maus/BikePortland)

After years of advocacy, the City of Portland finally wrested control of 82nd Avenue from the State of Oregon and has secured $185 million to spend on it.

“Moving through the entire process and being completely finished in five years is lightning fast.”
— Kristin Hull, PBOT

Now comes the hard part: They have just five years to plan and build many of the long-awaited projects.

The first phase of the project will spend $80 million allocated by the City of Portland through the federal American Rescue Plan Act, which comes with strict time constraints. According to comments from Portland Bureau of Transportation staff at a meeting of their bicycle and pedestrian advisory committee meetings last month, instead of the 7-10 year horizon that’s common for major capital transportation projects, all of the ARPA funds for this overhaul of 82nd Avenue must be obligated by 2024 and completely spent by the end of 2026.

“I’m really nervous about the timeline,” said PBOT Planning Division Manager Kristin Hull at that advisory committee meeting on December 14th. “Moving through the entire process and being completely finished in five years is lightning fast. And so we are going to meet that timeline… I’ll keep saying that over and over again. Because it is so present in my mind at all times.”

As of today (1/19), PBOT will have a lot more help to do it. They just agreed to award an $8 to $12 million consulting contract to KPFF Inc. for architectural and engineering services on what they’re calling the 82nd Avenue Investment Program.

To refresh, this project will encompass a large slate of updates to the former state highway (which was neglected by ODOT after the construction of I-205 about 10 blocks east). The Oregon Legislature has agreed to fund the project to the tune of $80 million, which will allow PBOT to bring it up to a “state of good repair” and complete the transfer.

“82nd Avenue is a defining roadway in Portland and is located in one of the most diverse areas of the state,” reads a description of the project in the PBOT request for proposals (RFP) won by KPFF. “It is a regionally significant transportation corridor, hosting one of TriMet’s busiest bus lines, serving 20,000 to 30,000 vehicle trips a day, and providing a critical north-south connection.”

Phase 1 planning and outreach has already begun. It will consist of $80 million in “critical safety and maintenance” projects along a seven-mile stretch of 82nd. Between SE Clatsop and NE Killingsworth, PBOT estimates they’ll build six to 10 new “enhanced crossings” ($10-$12 million), about nine “intersection safety enhancements” ($8-$10 million)and make significant upgrades to lighting ($10-$12 million) and sidewalks/ADA curb ramps ($43-$50 million) along large sections of the corridor.

PBOT Planner Julia Reed said the impact of these initial investments will be “amazing”, but also said the Metro 2020 funding measure process identified a total investment need of $500 million to do everything the community wants. 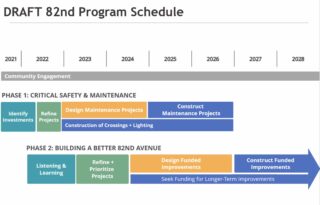 Larger-scale changes, like a rapid bus system, new lane configuration, changing the width of the street, and so on, will have to wait until Phase 2, which PBOT calls, “Building a Better 82nd”. Both phases will happen simultaneously with initial outreach on Phase 2 slated to begin this coming spring and construction to begin in 2027.

Questions from committee members hinted at robust discussions to come during Phase 2 planning.

Bicycle Advisory Committee member Iain MacKenzie brought up the idea of bike lanes and wider sidewalks on 82nd. “How are you planning to make sure that whatever’s built with the short-term safety projects don’t preclude more aspirational things in the longer term?”, he asked. (Hull responded that PBOT is aware of that issue.)

BAC Chair David Stein asked Hull how they’ll decide what type of facilities can and cannot be included in the future of 82nd. “We’ll need to have that conversation very carefully,” Hull responded. “And look at the needs for transit and the needs for motor vehicles and the needs for pedestrians and cyclists and really work through those in a structured way… It’ll be a careful discussion.”

If PBOT is anything like Park & Rec, then they’ve already internally decided on what they want to do on 82nd. They’ll have the dog-n-pony shows where they’ll have some very focused options for the community to work on and discuss about. Phase 1 check.
During Phase 2 they’ll gather the community together, but break everyone down into small groups so that dissent about what PBOT engineers want to do is controlled and contained.
Then Phase 3, the politicians will go out for the ribbon cutting ceremony and what’s actually going to be done revealed which will be a big surprise to those that took their time in Phase 1 & 2. Of course by then, too late.

The nice thing about ARPA funding is that NEPA isn’t required – Treasury manages the funds, not DOJ nor USDOT – so all the usual useless discussions about whom or which minority is being impacted suddenly becomes irrelevant until the phase 2 non-ARPA money kicks in. It will all be carefully choreographed by PBOT, the best-managed DOT is the USA, a DOT that always does what it has promised to do, on time, and within budget.

Like outer Division. A prime example of what was planned for and what actually is being built.
82nd Ave. is the busiest bus line in the city followed by Division St. at #2.

PBOT – Where lightning fast = half decade. Their words, not mine.

I have to agree. How is this “lightning fast”? This should take 18 months tops. TriMet built the first leg of the MAX in less time than this.

I love that they’re going to spend the next YEAR “refining projects” for Phase 1 — despite the fact that they’ve already identified the crossings, intersections, and lighting improvements they’re going to do. Twelve months to decide how to put up light poles, median islands and ADA ramps.

Then, of course, followed by 18 months of “refining and prioritizing” Phase 2. Are they communicating with neighbors by carrier pigeon? Community outreach, ample notification of venues for discussion and feedback, etc. is all important but that seems like something for six months, not a year and half.

Given PBOT and the city of Portland’s spotty (at best) historical record I don’t want to downplay the importance of planning especially when it comes to questions of equity and the environment, but if this is an “emergency” in action then no wonder regular projects slouch along for a decade.

Lightning fast would be trucks and workers in the road tomorrow, setting up barrels and signs and temporary barriers. They’d be followed by the crews pouring concrete and repainting the road.

82nd needs a quick and dirty makeover before any more time is spent deliberating on the specifics of exactly what to do, and where and when to do it.

I do appreciate a focus on crossing 82nd. I only live three blocks to the west but almost never take my kids on bike rides to the east. It is too stressful getting across. So we always end up going west. It’s not my favorite road to drive on either, and it really does act like a wall separating east Portland from the rest of the city.