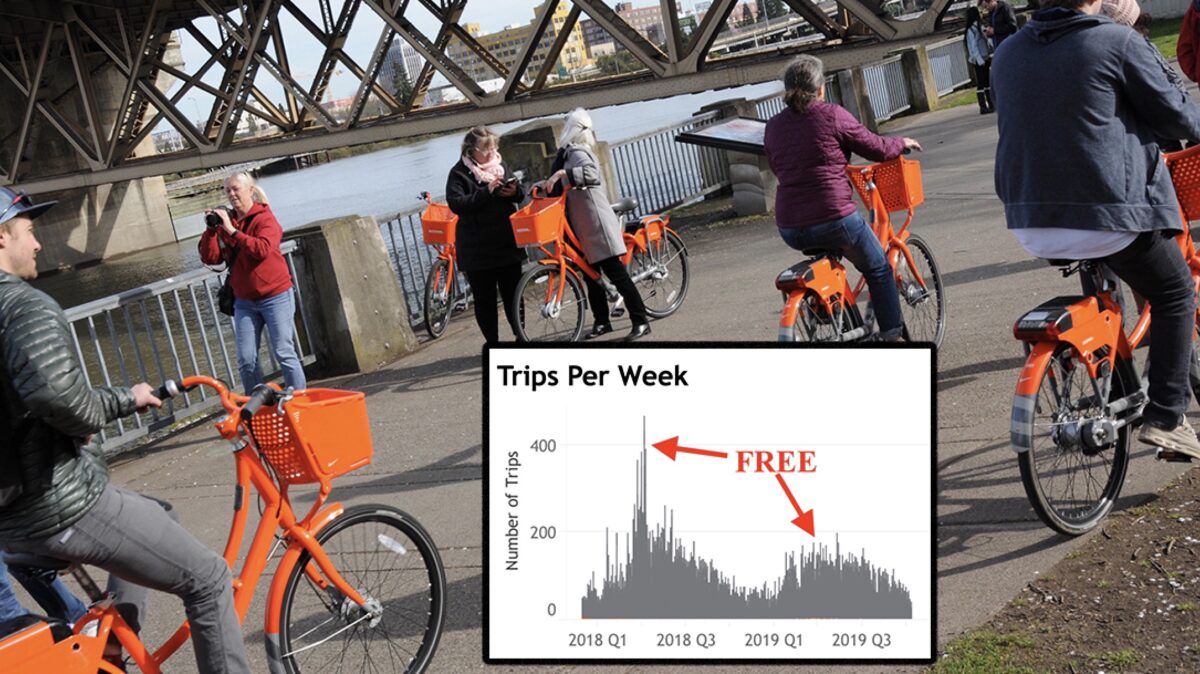 It’s rare when one way to cope with a tragic international crisis just so happens to have myriad positive impacts and aligns with many of our adopted goals. That’s the situation we found ourselves in with the high gas prices due to Russia’s war in Ukraine.

Gas prices in the Portland area are hitting a new, all-time record high every day. Today AAA listed the average price per gallon of $4.699. 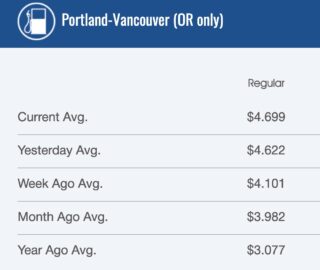 As gas prices surge, Portland leaders should do everything in their power to make it easier and cheaper to ride bikes. And this isn’t just the crazy bike guy talking.

At a meeting of the Portland Bureau of Transportation Bicycle Advisory Committee last night, City Bicycle Coordinator Roger Geller said, “I really want you to understand that city very much wants bicycling to grow and very much wants driving to decrease. The city’s goal is to eliminate the negative effects over-reliance on driving has on cities, individuals and the globe at large.”

[Opinion: Gas prices have spiked again, and cycling could too]

One of the easiest ways we can help people save money on gas is by unleashing the Biketown bike share system by making it free (as former BAC member Catie Gould dreamt last night). We’ve invested millions in our bike infrastructure and we have one of the best bike share systems in the country. Now is the time to help that investment reach its full potential.

“The city’s goal is to eliminate the negative effects over-reliance on driving has on cities, individuals and the globe at large.”
— Roger Geller, PBOT

The City of Portland and their partners at Biketown (which is operated by Lyft), have done this twice before and both times the public responded by using the system much more. In May 2018 PBOT made Biketown free for the entire month of May to coincide with National Bike Month and they repeated the promotion in 2019 (albeit for just 11 days).

The move might also be attractive for the system’s title sponsor, Nike. They’ve already made headlines for pausing sales in Russia and donating to Ukrainian relief efforts. Sticking it to Putin by giving away gas-free transportation would be a nice corporate PR win.

Now that Biketown is available in an a greater swath of the city, making it free makes even more sense from a transportation equity perspective. It would also likely entice many people to try the system for the first time, some of which are likely to convert to regular users even after a free promotion ended.

Reduced costs of Biketown are just one of a myriad things the City of Portland could do to respond to this moment.

This war, which is powered by a dictator who gets much of his financing and political leverage by selling oil, is yet another illustration of why we need a more resilient transportation system where more people get around without gas-guzzling cars and trucks. If we stand any chance of reaching the goals Geller mentioned last night, we must bring bicycling out of the shadows and make it easier for more affordable for Portlanders to pedal against Putin.

(Note: If you are a Portland student receiving Federal Student Aid, or are an Oregon Trail Card user or otherwise meet the eligibility requirements, you can already get a free Biketown membership through PBOT’s Biketown for All program. It comes with a system membership and free, unlimited 60-minute trips.)

If they were free every ya-hoo on the streets would be stealing ’em, trashing ’em and tossing ’em in the river.

There would still be some kind of account associated with each checkout, and I’d hope some kind of purposeful positive ID system is in place to get an account. It would not be so happenstance as people checking out a free bike and then deciding to ditch it when they can be found, fined, and/or prosecuted.

When it comes to the e-Scooters that can be picked up and carried without being checked out, that is a different story. Even a BIKETOWN bike not tethered to a rack is quite heavy to attempt to carry (I don’t know if they have any kind of active drive-train locking when they’re not checked out).

You have to put the lock into the bike to check it back in. Even if you fail to attach the lock to a nearby object, this still locks the wheel thru the spokes, so you cannot spin the rear wheel.

The article discusses that the system has been made fareless for about a month and a half in the past. If all of the bikes had been destroyed by that I think it probably also would have been mentioned in the article. Seems like we already have proof that the fare is not magically preventing theft/damage to the bikes.

If we did this and saw a demand spike I would hope to see purchase orders for more bikes which also would require subsidy.

How about this crazy, zany, out of the box idea? Let the group responsible for the bikes (Lyft) advertise the great deal that these bikes are as compared to 4.60 a gallon gas, thereby getting more people to pay for rides and growing the business. You know, capitalism.

But, I guess giving away the service just coincides with the zeitgeist that makes Portland such a livable, happy and well adjusted place to live.

Let’s make it free, as long as someone else pays for it!

The premise is ridiculous since gas is cheap in this country…
So bikeportland is now whining about gas prices?
Gas was $2 a gallon in 1980, when homes in Portland cost $49,000. The media needs to grow up about the price of gasoline in America.

I think you have the premise wrong dwk.

This is about what the city can do if people don’t want to pay that much for gas. I happen to think gas is still too cheap… given that people are still driving all over the place when there are other options available.

Heavily discount yes, but not free.

Yes, let’s subsidize rich inner Portlanders at the expense of those poorer schmucks who can only afford apartments in those areas with poor or non-existent public transit, no sidewalks, and no bike facilities, who must drive to get any services, not to mention to their low-wage jobs and low-quality schools, and where naturally there still is no bike share.

I can’t even make sense of your comment David.

Biketown has expanded quite a bit since you left town btw.

It has expanded, but there are still large sections without service east of 122nd, out to the city line at 162nd/174th, where many of the poorest people in the city live. After a decade of service and promises, you’d figure they would get out there, wouldn’t you? You know, serve the poor?

It appears your answer is, “because we can’t do everything, we should do nothing.” Let’s not let the perfect be the enemy of the good. Yes, we do need to do better at serving the less affluent sections of Portland, but the answer isn’t to do nothing. Biketown can and should have a vital role in moving Portlander’s around town more efficiently and at a far cheaper rate than private automobile travel. We should be looking for every opportunity to expand the Biketown service area and encourage as many people as possible to use the bicycle, and part of winning that argument is to make Biketown more visible through more use. I certainly think a free month and/or a more heavily subsidized per minute rate would be several steps in the right direction.

“Free for a month” is a good promotion. But charging something for the service (even if it’s not a lot) seems like something we’d need for demand management.

Or maybe allow fifteen free minutes per day, then start charging by the minute.