“The less dependent we are on oil, the less we support Putin’s imperial war machine.”
— Sam Balto

Portlander Sam Balto is using Russia’s war in Ukraine as a way to raise awareness about driving gasoline-powered cars.

Balto was inspired by someone who recreated a World War II anti-Hitler propaganda poster and shared it on their Twitter account last Thursday. The graphic, which was accompanied by the message “If you want to hit Russia where it hurts, cut your petroleum use,” replaced Hitler with Russian President Vladimir Putin. It shows someone driving in a car with Putin next to them in order to link the popular use of gasoline for driving cars to the unpopular Russian dictator.

Balto says he loved the poster from @no_face (who lives in Ann Arbor, Michigan, according to his Twitter profile) so much he wanted to spread it on a local level. He has printed and laminated 8.5 x 11-inch versions and is giving them away to anyone in Portland who donates at least $10 to the Community Cycling Center.

For Balto, the Putin-Ukraine-driving connection is simple. “There’s a relationship between our oil consumption and Russian oil production,” Balto shared with us this morning. “The less dependent we are on oil, the less we support Putin’s imperial war machine and his invasion into Ukraine.” Balto has been an outspoken activist in Portland for years and his work centers around encouraging people to walk and bike to school. Balto earned a Weston Award from Oregon Walks in 2019.

According to the International Energy Agency, Russia is the largest oil exporter to global markets and the United States buys about 540,000 barrels per day — or 6.6% of our total supply — from them. Gas prices have spiked in recent days as a result of this relationship.

For his part, Eric @no_face is selling stickers of the graphic online with proceeds going toward a nonprofit sending aid to Ukraine.

If you want to grab one of these posters and pick it up locally, just donate to the Community Cycling Center and share a screenshot of your receipt with Balto via Twitter.

The graphics are great. But while the message is not exactly wrong, it’s not exactly right, either; oil is not as fungible as many generally think. While the connection seems simple, it’s probably better described as simplistic.

But the thing that rankles me is it feels like hijacking the awful situation in Ukraine to promote what is at best a tangential issue. It feels a little exploitative to me.

Tangential? Wars are typically fought over resources. Russia wants control of Ukraine because Ukraine has a large land area that is rich in minerals, land for growing food, and other resources. Yes I know, the ostensible reason for the invasion is Russia trying to prevent Ukraine joining NATO, but Russia’s hunger for this land area is a big part of the reason for the NATO situation. Reducing our consumption of everything reduces potential for wars in general. And, with money paid to Russia for petroleum which is greater the more “we” drive cars in the USA (I don’t have a car), Russia funds more troops and weapons to oppress Ukraine and other countries.

I don’t like to buy USA fossil fuel for exactly the same reason (it promotes war). Money for gas goes to fuel provider -> some of it enriches the USA government -> much of USA government’s money is used to fund the military -> the hyper-funded military gets busy invading one or another poor and non-aggressive country such as Afghanistan.

Russia or Putin (and his apparatchiks and pet oligarchs)?

As someone from a soviet bloc nation is annoys me when USAnians equate the actions of a brutal autocrat with a whole nation/region.

Sorry but this is dumb. And not even funny.

Of course the USA has an exceptional record of not invading other countries. Why invade when we already have large military bases in Greenland, Britain, Germany, Italy, Japan, South Korea, Poland, & Cuba? We would never think of invading Afghanistan, Iraq, Syria, Somalia, Panama, Haiti, Bosnia, Granada, Vietnam…

“When you drive a car*, you drive with AmeriKKKa” would be more accurate given that the USA is, by far, the largest oil producer and imports a miniscule amount of oil from Russia.

*Do USAnians even buy cars any longer?

PS: Don’t @ me about the brutal and criminal invasion of Ukraine. I have friends in Moldova which may be next on Путина (хуйла) list.

Middle of the Road Guy
Reply to  PTB

It’s a term he uses for “American”. I can tell its him in other internet areas as a result.

Yeah, I’ve picked up this much. I just don’t understand why he does it. His comments are literally the only place I’ve ever seen this used.

soren
Reply to  Middle of the Road Guy

Lots of people use USAnian (or USian) and it’s very amusing that you believe it’s only me.

PS: I post here and on several private fora and nowhere else (not even social media).

No sanctions on Russia’s oil and gas industries says, despite the human suffering and tough talk by politicians, cheap gas still calls the shots.

US gasoline sanctions don’t matter because the USA produces and consumes the vast, vast majority of its petroluem products and finished motor gasoline. It’s sanctions by Europe that would matter but this would require a truly massive increase in LNG exports by the USA and other nations to help Europeans survive the next winter.. It would also, of course, require a continent-wide effort to convert gas heating to efficient heat pumps, which would be a very good thing.

Russia Is United States’ Top Source Of Imported Gasoline. “In 2021, Russia accounted for 21% of all U.S. gasoline imports, with Canada second at 17%.”

Also of interest is ‘Revenue minus production cost of oil, percent of GDP’ vs country. In the link, select ‘oil revenue’ under ‘energy and environment’ and select countries of interest, say Russia, USA, China, etc.

US imports of motor gasoline from any nation. including Russia, are so tiny as to be inconsequential: 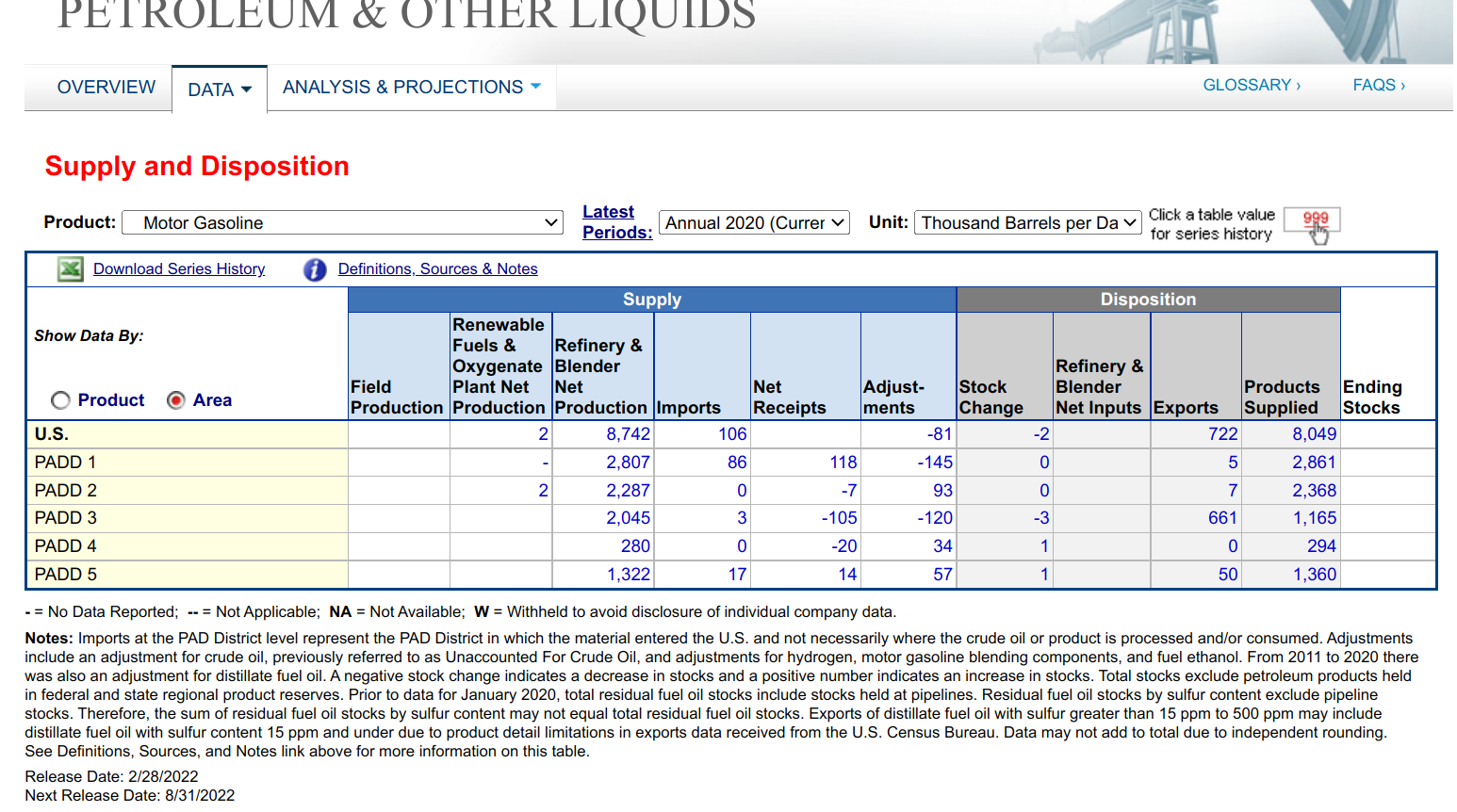 The Forbes “blog” (not the actual edited journalism site) was linked to without any context (e.g. that total finished gasoline imports are far less than a drop in the barrel of total USAnian production)

It’s also very weird to see defensiveness about USAnian gasoline production here. There is so much cognitive dissonance when it comes to ecocide.

The original poster is from the second world war, and says “When you ride alone, you ride with Hitler” – it promoted car pooling as a way to safe fuel and resources for the war effort. https://energyhistory.yale.edu/library-item/when-you-ride-alone-you-ride-hitler-us-government-propaganda-poster-1943
“The massive mobilization for World War II prompted an unprecedented government campaign to urge the public to conserve resources necessary for the war effort. The federal government was particularly concerned with conserving rubber on the home front after the Japanese military cut off access to rubber plantations in southeast Asia. Gasoline rationing was seen as a way to reduce vehicle use at a time when more Americans than ever owned and drove automobiles.. This 1943 poster, designed by Weimer Pursell for the Office of Price administration, urges Americans to carpool for the war cause.”