Washington County is seeking public input on its plan to realign Thompson Road in the Northwest Bethany/Bonny Slope West area. This plan will connect Thompson Road to Kenny Terrace west of Saltzman Road in order to smooth out sharp curves and increase vehicle and bicycle capacity. The project is expected to cost $6.5 million and is being funded through the countywide Major Streets Transportation Improvement Program (MSTIP), a bond cost-sharing program between Washington County and the cities of Beaverton, Hillsboro and Tigard to prepare for growth in the area. 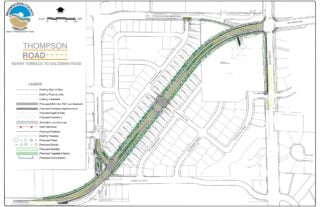 After the realignment, Thompson Road will have three general purpose vehicle lanes, one open to drivers in each direction and a center turn lane. Protected multi-use paths will replace the sidewalks on both sides of the street, expanding them from five feet to 10 feet, and the bike lanes will also be expanded, with two-foot painted buffers between the bike and other vehicle lanes. The project will also fit Thompson Road with improved street lighting and stormwater drainage.

This proposed redesign caught the attention of some bike activists who are disappointed with the planned “protected” bike lanes. Bike activist Shawne Martinez pointed out on Twitter part of the proposed redesign includes a 13-foot vegetated median in between vehicle lanes, while people riding bikes are only protected from cars by a thin strip of paint.

Washington County will have the virtual open house open for public comment until January 23. It contains more details about the project plan, landscaping, and timeline.

Currently, planners say they will take community input from the open house to work on finishing the design, which is intended to be completed in September. Road construction is tentatively planned for December 2022 to December 2023, after the right-of-way acquisition is complete.

This project increases efficiency for users of all modes. What’s not to like? Considering they’re calling them “multi-use paths” instead of “sidewalks” it seems like the intent is to let cyclists who desire protection use them, while the more confident cyclists can use the buffered bike lanes. Plus, a two-foot buffer can easily be changed to true bike lane protection later if the multi-use path configuration proves problematic for some reason. Certainly way better than that status quo in the area.

And I like the vegetated median in cases where there’s room, like here. Doesn’t do anything functionally, but the more greenery the better. It’s way better than having additional underutilized asphalt.

cmon, it’s not that hard! put the bike lane ON THE SIDEWALK. keep the paint, to dissuade pedestrians from wandering in, but that way it’s a nice, 15′ wide sidewalk/bike lane with a 6′ buffer of greenery. wider than the tillikum crossing paths, and that works fine!

On a similar line of thought to cdan, it is a shame that the planting buffer is not separating the bike lane from the car lanes. Lighting and drainage infrastructure would also perform better with this arrangement. I think additional information and detail of the intersection designs would be useful for the public to be able to understand and assess the proposed changes as well.

Interesting website… Washington County literally spent more time trying to communicate how to bake cinnamon rolls than they did communicating what the actual safety issues were.