Staff at the Portland Bureau of Transportation, like colleagues at many road agencies around the region, are feverishly working to get projects lined up for potential funding from President Joe Biden’s recently passed Infrastructure Investment and Jobs Act (IIJA).

“We’re looking at full sidewalks, potentially a multi-use path on the east side, to serve the Columbia Slough trail.”
— Zef Wagner, PBOT

At a meeting of the city’s Freight Advisory Committee Thursday, PBOT Transportation Planner Zef Wagner shared a list of six bridges that have been put on a priority list for possible grant funding. PBOT is eyeing the $12.5 billion bridge repair and replacement program in the IIJA. While the presentation was aimed at freight advocates, all the bridges in question offer important connections in the bike network and would very likely be reconstructed with new bikeways.

To choose potential funding candidates, PBOT used a selection process that looked at factors including freight network connectivity, street classification, general condition, disaster resiliency, and so on. The bridges on the list are likely familiar to veteran riders. They include (from north to south): N Lombard Street viaduct over railroad at Terminal Road; N Portland Rd over Columbia Slough; Columbia Blvd over N Portland Road and railroad; NE 33rd Ave over Columbia Blvd; N Interstate Ave/Larrabee flyover; and NE 12th Ave over I-84.

Here’s a brief summary of each project with visuals taken from Wagner’s presentation: 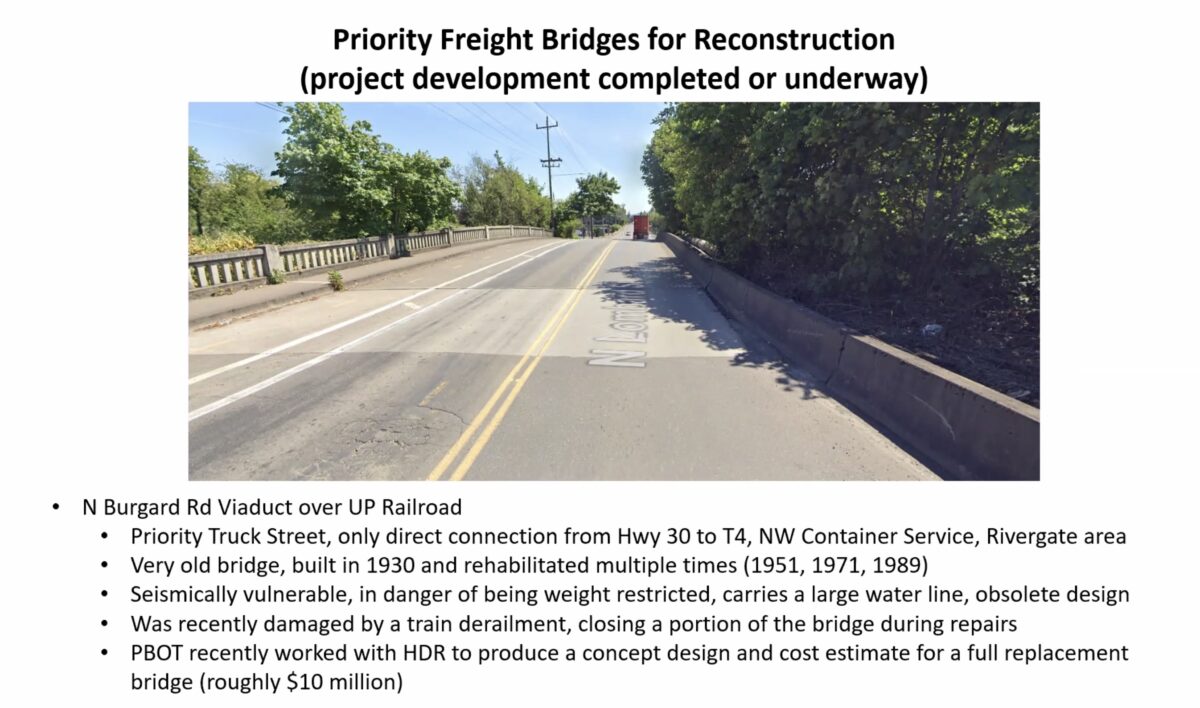 This is a key route for bicycling between St. Johns and Kelley Point Park and other pieces of the 40-Mile Loop. Wagner said they’ve scoped a rebuild at about $10 million and that, “This bridge is probably the most ripe one for infrastructure bill funding if that comes through.” 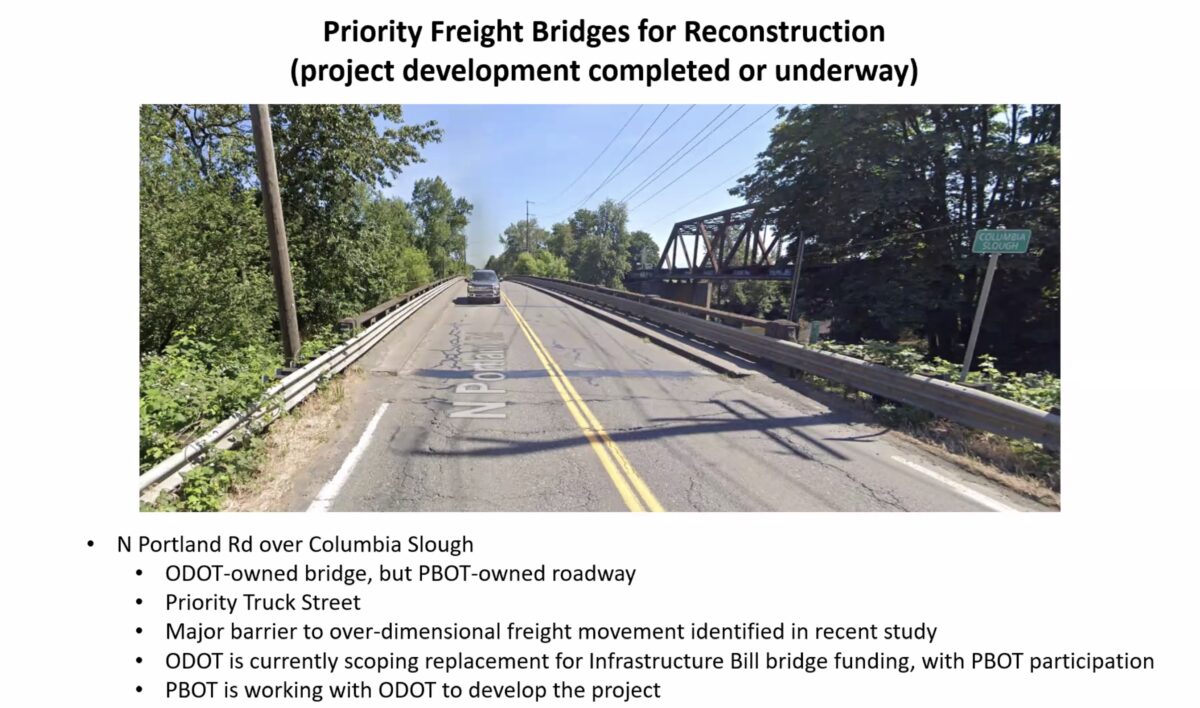 This is an ODOT bridge on a PBOT-controlled road (vestige of a prior jurisdictional transfer of what used to be a state highway). It’s a key bridge for freight trucks, but weight limits mean many permits get denied. ODOT has prioritized this and it’s very likely to get funded soon. If/when it does, there’d be a negotiation between PBOT and ODOT to transfer it to the city.

Currently this bridge has no biking space and is very stressful to ride on. When the adjacent Slough bike path is closed, it would be wonderful to good have a bikeway on this bridge. If we could connect a safe bikeway here, it would help create an important active transportation link to vastly underserved residential areas north and south of Columbia Blvd. Wagner said the new bridge would have wider lanes for trucks, but also, “We’re looking at full sidewalks, potentially a multi-use path on the east side, to serve the Columbia Slough trail.”

Columbia Blvd over N Portland Road and the railroad “cut” 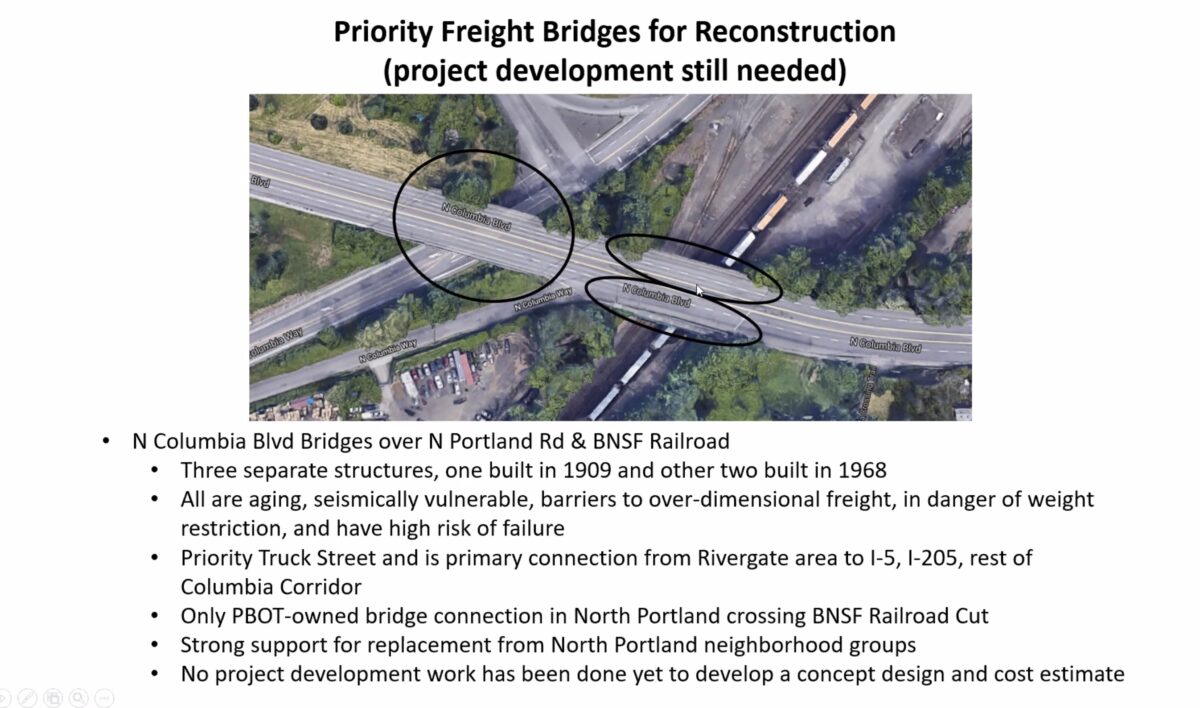 These two bridges are old and in very bad condition. They’re also the only PBOT-owned crossing of “the cut” and will likely not survive a major disaster. “If there was an earthquake or just other weather-related failures St Johns will become isolated,” Wagner explained. “Columbia Blvd makes the most sense as an escape route, so we’re really pushing for this.”

Bikeway potential is unclear at this point, but it’s worth noting that these crossings are just a few yards from the end of the Peninsula Crossing Trail multi-use path. If PBOT could integrate a bike path on new bridges, they might be able to connect it to nearby residential streets and George Middle School. 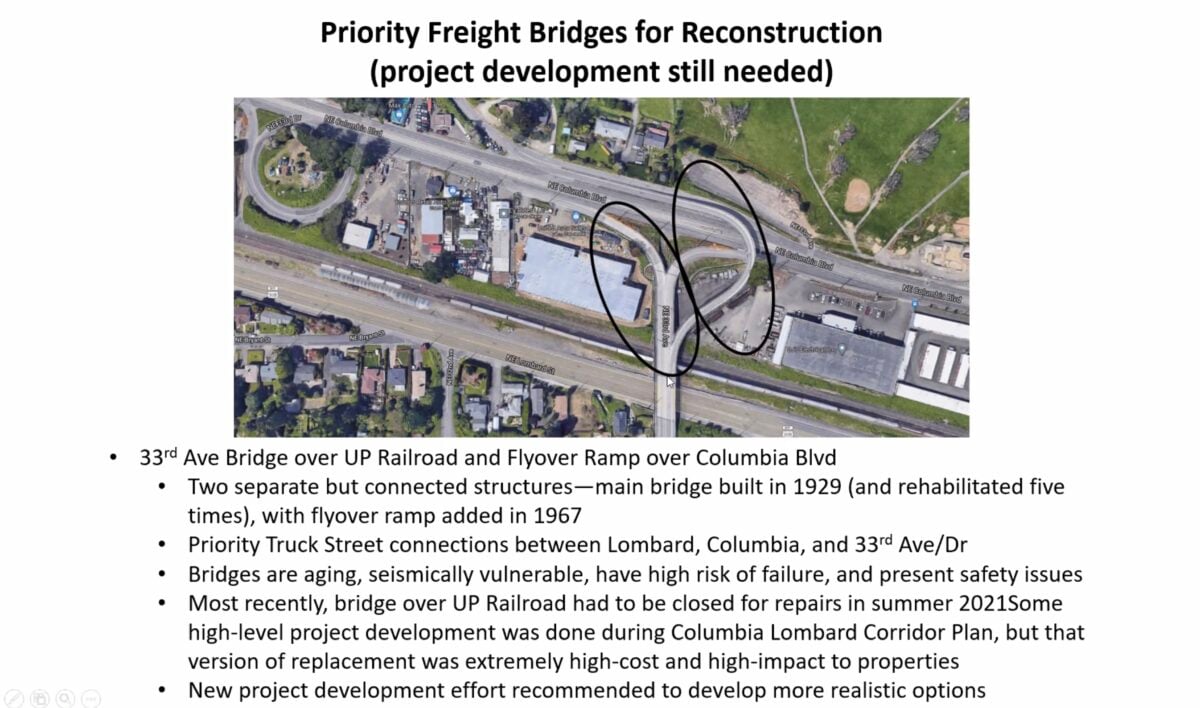 This is a complicated bridge complex that PBOT has been eyeing to replace and reconfigure for years. We reported on one possible new alignment that was being considered in PBOT’s Columbia Lombard Mobility Plan, but unfortunately a developer has recently built a five-story building right where that potential alignment would have gone (since no formal planning had taken place, the developers had no obligation to consider it). This bridge is very important for the bike network, since it provides a link between neighborhood greenways south of Columbia Blvd and the popular Marine Drive bikeway. Wagner said PBOT is taking a look at new potential alignments. 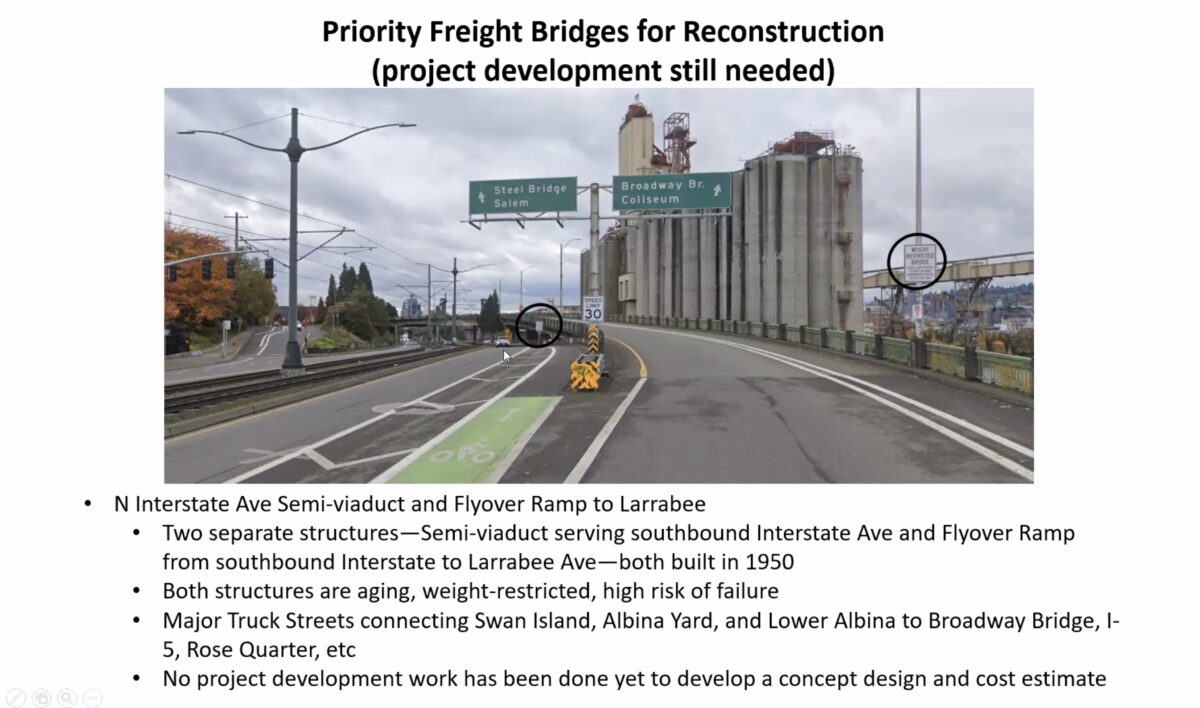 Most of you are familiar with this location since it’s on one of the most popular north-south routes in the city. Wagner said both the flyover and approaching viaduct are weight-restricted. PBOT is considering whether this entire section of Interstate could be redesigned to server everyone better. This could be huge for bicycling because, as we have documented for many years, the undercrossing is extremely narrow and dangerous and the excuse PBOT has used for not widening the bike lane here is because of the bridge supports. If this gets funded, those supports would very likely be moved and we could finally create a quality bikeway here 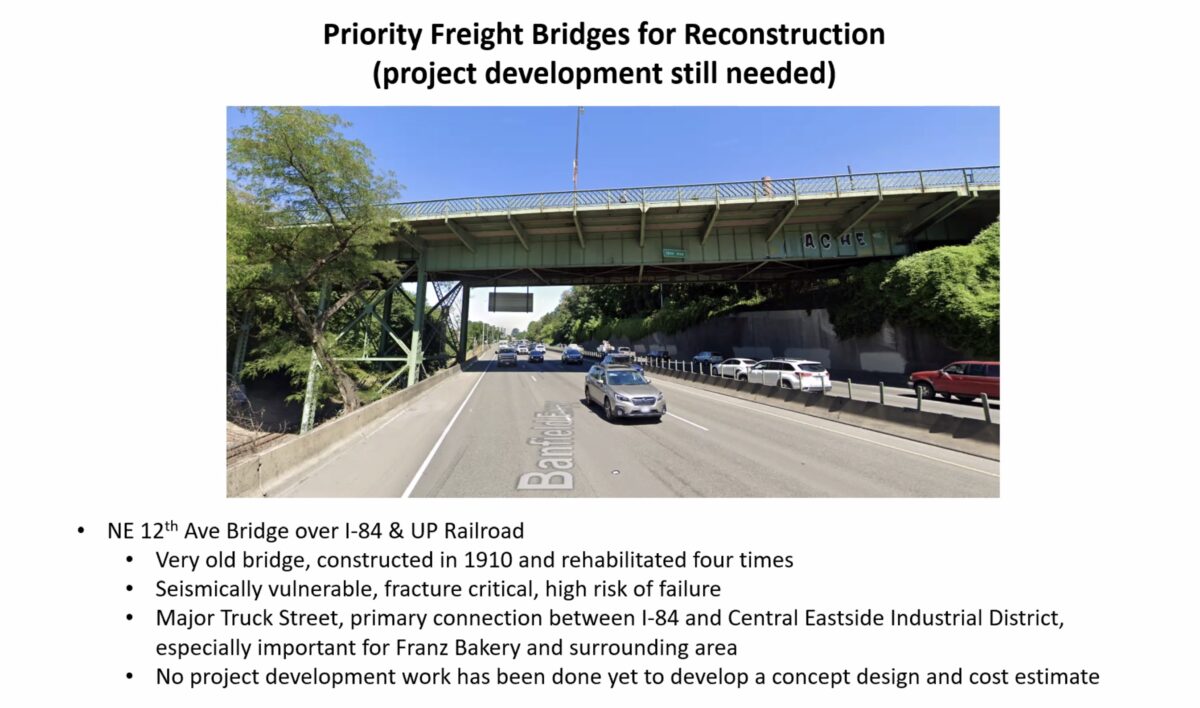 Some of you will recall the contentious process to make better bike lanes on this bridge back in 2011. Now with the Blumenauer Crossing imminent, 12th feels less important. But it will still be an important connection, especially given how it links to existing bike routes and Benson High School. High quality protected bike lanes should be a foregone conclusion if this old bridge is replaced.

Wagner said PBOT would need about $500,000 to do the requisite planning work to get all these projects up to “shovel-ready” status and compete for grant funding. Before PBOT could even apply for federal funding for the projects, City Council would have to adopt a resolution allowing them to do so. PBOT’s job now is to complete the due diligence, outreach, and planning needed to reach that point.

At the end of the discussion, PBOT Resources Manager Mark Lear offered a reality check in terms of how much funding would be available for these projects. Given how the federal funding formulas work (based on city population), he estimated Portland would receive about $20-25 million.

Columbia Blvd over N Portland Road and the railroad “cut”: It would be amazing if the Peninsula Crossing trail could be extended along the RR tracks to a new underpass under Columbia Blvd to join the trail around the Wastewater Treatment plant and over the slough!

N Interstate Ave/Larrabee flyover: I hope PBOT will push for first class separated path to accompany the Larrabee rebuild. This represents our best chance to address a crucial pinch point for connecting the NP Greenway to the Esplanade. Interstate Ave ave occupies some truly prime waterfront real estate. I believe that all motorized southbound Interstate could be routed to the Larabee Viaduct and connect back to Interstate at the Interstate signal. The southbound stretch from the Larrabee signal to the Tillamook Signal could transformed into a shared bike/pedestrian trail. South of the Broadway Bridge, the path would shift to the top of bank above the river, and cross under the Steel bridge on a viaduct over the RR access road to connect to bridge over the RR tracks to the Esplanade. North of Tillamook remains a sticking point: Ideally the NP Greenway would go down Tillamook to the river and use the Cement Road to connect to the riverfront trail on Swan Island. Until that can be sorted out, The bike lanes on Interstate could be used, or an alignment on the west side of Intestate and Greeley developed that would bring people along the bluff under Going and above Swan Island with great views of the river and no street crossings.

If this “wish list” and other regional projects becomes reality then the 20’s [as in 2020s] may be one of the best decades for improved + safe bike access since the 90’s original work (Mia Birk, etc.) in getting bike access across the Willamette.

Now with the Blumenauer Crossing imminent, 12th feels less important. But it will still be an important connection…

I will likely never use the Blumenauer Crossing because it simply does not connect well to the bikeways I use to commute through the Lloyd district ~6 days a week.

Columbia is “the only PBOT-owned crossing of ‘the cut.'” Is that right? Willamette Blvd must be PBOT owned isn’t it? Definitely a worthwhile project, just curious.

Yep. That’s definitely right. The others are owned by Union Pacific AFAIK.

Willamette, Lombard, and Fessenden bridges are owned by BNSF Railroad.

I wonder if there is any federal funding available to make and keep the I-205 bike path safe and useable for cyclists?